Politics of the Falkland Islands

From Infogalactic: the planetary knowledge core
(Redirected from Attorney General of the Falkland Islands)
Jump to: navigation, search

The politics of the Falkland Islands takes place in a framework of a constitutional monarchy and parliamentary representative democratic dependency as set out by the constitution, whereby the Governor exercises the duties of head of state in the absence of the monarch and the Chief Executive acts as the head of government, with an elected Legislative Assembly to propose new laws and hold the executive to account.

The islands, an archipelago in the southern Atlantic Ocean, are a self-governing British overseas territory. Executive power is exercised on behalf of the Queen by an appointed Governor, who primarily acts on the advice of the Executive Council. Legislative power is vested in both the government and the Legislative Assembly. The judiciary is independent of the executive and the legislature. The military defence and foreign policy of the islands is the responsibility of the United Kingdom. Politics in the Falkland Islands is minimal as no political parties exist on the islands, and the governmental and legal proceedings very closely resemble British standards.

The Argentine Republic claims the Falkland Islands (known in Spanish as Islas Malvinas) to be part of its territory. This claim is disputed by the Falkland Islanders and the United Kingdom. In 1982 the islands were invaded and occupied by the Argentine military junta, starting the Falklands War. The islands were subsequently liberated by British forces just 74 days after the start of the war, which led to the collapse of the military dictatorship in Argentina.

The sovereignty of the Falklands remains in dispute, with Argentina claiming the islands are an integral and indivisible part of its territory, 'illegally occupied by an occupying power'.[2] The United Kingdom and the Government of the Falkland Islands maintains that the Islanders have the right to determine the sovereignty of their birthplace.[3] In a referendum in 2013 the people of the Falkland Islands soundly rejected Argentina's claim to the islands, with 99.8% of voters supporting the Falklands remaining an Overseas Territory of the United Kingdom.[4] 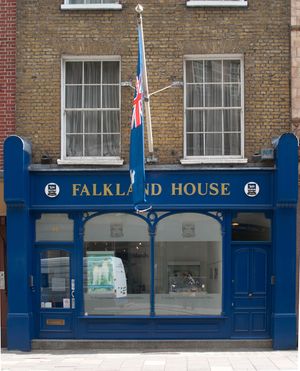 Executive authority on the Falkland Islands is vested in Elizabeth II, who has been the head of state since her accession to the British throne on 6 February 1952. As the Queen is absent from the islands for most of the time, executive authority is exercised "in Her Majesty's name and on Her Majesty's behalf" by the Governor of the Falkland Islands. Colin Roberts, the former Commissioner of the British Indian Ocean Territory, has been Governor since 29 April 2014.[5][6]

The Governor normally acts only on the advice of the Executive Council of the Falkland Islands, which is composed of three Members of the Legislative Assembly elected by the Assembly to serve on the Council every year, the Chief Executive, the Director of Finance and the Governor, who acts as presiding officer. The constitution does permit the Governor to act without the consulting the Executive Council and even go against its instructions, but in both cases the Governor must immediately inform the Secretary of State for Foreign and Commonwealth Affairs in the United Kingdom, who can overrule the Governor's actions.

Government policy and the execution thereof is primarily decided by the Chief Executive of the Falkland Islands who is the head of the public service, responsible for the efficient and effective management of the executive, acting as the islands' head of government. The Chief Executive is appointed by the Governor on the advice of the Executive Council. Keith Padgett has been Chief Executive since February 2012.[7]

The legislative branch consists of a unicameral Legislative Assembly. General elections must take place at least once every four years, in which the islanders elect eight members to the Legislative Assembly (five from Stanley and three from Camp) through universal suffrage using block voting. There are also two ex officio members of the Assembly (the Chief Executive and the Director of Finance) who take part in proceedings but are not permitted to vote in the Assembly.

The following major conventions apply to the Falkland Islands and should be taken into account during the drafting of legislation:[8]

Until 2009, when the new constitution came into force and created the Legislative Assembly, the legislature of the islands was the Legislative Council, which had existed since the 19th century.

The judicial branch consists of the Supreme Court, the Court of Appeal, the Summary Court and the Magistrates' Court. The judiciary is strictly independent of the executive and legislature, although it has links with the other branches of the government through the Advisory Committee on the Prerogative of Mercy. The government also employs five lawyers; the Attorney General, Principal Crown Counsel, Senior Crown Counsel, Crown Counsel and a Legislative Drafter.

The court system of the Falklands is set out by Chapter VIII of the Constitution and closely resembles the system in England and Wales. The Supreme Court of the Falkland Islands has unlimited jurisdiction to hear and determine any civil or criminal proceedings, and consists of the Chief Justice (CJ) who is generally a senior barrister or solicitor with a good amount of judicial experience in the United Kingdom. The CJ is not resident in the Falkland Islands but travels to the islands if and when necessary to hear cases. The most serious criminal and civil matters are reserved for the Supreme Court. In civil matters, generally there is no jury however, in criminal matters, the defendant can elect trial by judge and jury or judge alone. There are only a few criminal cases which must be heard before the Supreme Court; these are murder, manslaughter, rape, piracy, treason and arson with the intent to endanger life. The CJ also hears appeals from the Magistrates' Court.

In the court system on the islands, there is a panel of Justices of the Peace (JPs) who sit in the Summary Court, which has no jury. JPs are all non-lawyers and are made up of "upstanding members of the community". They hear the most simple of criminal cases (or sit when the Senior Magistrate is not in the Islands) and they also act as the Licensing Justices who deal with alcohol-related applications, such as extended opening hours, special occasion licences, etc.

The Senior Magistrate (SM) is appointed by the Governor and presides over the Magistrates' Court, which again has no jury. The SM is usually a UK qualified lawyer, with at least 10 years experience as an advocate and, usually, with some judicial experience. The SM holds office for a maximum of three years and is then replaced. The SM is resident in the Islands and hears the majority of cases from simple criminal and civil matters right up to very serious criminal matters or complex civil cases. The SM also hears appeals from the Summary Court.

Advisory Committee on the Prerogative of Mercy

The Governor has the power to grant a pardon to any person concerned in or convicted of an offence, but the Governor can only use this power after consultation with the Advisory Committee on the Prerogative of Mercy. The Committee consist of two elected members of the Legislative Assembly (appointed by the Governor on the advice of the Legislative Assembly), the Chief Executive, the Attorney General and the Chief Medical Officer.

The current Attorney General is Mark Lewis, who took office in April 2011.[9]

There is also a Public Accounts Committee consisting of a chairman and two other members appointed by the Governor (in consultation with the elected MLAs) and two elected members of the Legislative Assembly. Reporting to the Legislative Assembly, the Committee overseas the economy, government expenditure, all public accounts and audit reports on the islands. The Director of Finance is not permitted to be a member of the Public Accounts Committee.

As in many parliamentary democracies, there are no direct elections for the executive branch of the Falkland Islands Government. Instead the people elect the legislature which then advises and forms part of the executive. General elections, which elect the Legislative Assembly, must take place at least once every four years. Suffrage is universal in the Falklands, with the minimum voting age at eighteen. The Legislative Assembly has ten members, eight of which are elected using block voting (five from the Stanley constituency and three from the Camp constituency) and two ex officio members (the Chief Executive and the Director of Finance).

In the last general election, which took place on 7 November 2013, only non-partisans were elected as there are no active political parties in the Falkland Islands. The next elections is due to take place in November 2017 (four years after the last election).