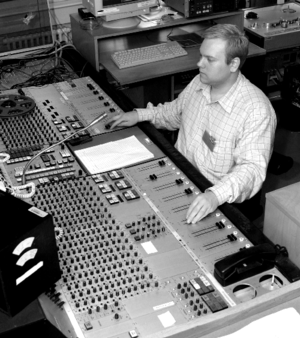 An audio engineer at an audio console.

An audio engineer works on the recording, manipulation using equalization and electronic effects, mixing, reproduction, and reinforcement of sound. Audio engineers work on the "...technical aspect of recording—the placing of microphones, the turning of pre-amp knobs, the setting of levels. The physical recording of any project is done by an engineer ... the nuts and bolts."[1] Many audio engineers creatively use technologies to produce sound for film, radio, television, music, electronic products and computer games.[2] Audio engineers also set up, sound check and do live sound mixing using an audio console and a sound reinforcement system for music concerts, theatre, sports games and corporate events.

Alternatively, the term "audio engineer" can refer to a scientist or professional engineer who holds a B.Sc. or M.Sc. who designs, develops and builds new audio technologies working within the field of acoustical engineering.[3]

Audio engineering concerns the creative and practical aspects of sounds including speech and music, as well as the development of new audio technologies and advancing scientific understanding of audible sound.[3]

Research and development audio engineers invent new technologies, equipment and techniques, to enhance the process and art of audio engineering.[4] They might design acoustical simulations of rooms, shape algorithms for audio signal processing, specify the requirements for a public address systems, carry out research on audible sound for video game console manufacturers, and other advanced fields of audio engineering. They might also be referred to as acoustic engineers.[5][6]

Audio engineers working in research and development may come from backgrounds such as acoustics, computer science, broadcast engineering, physics, acoustical engineering, electrical engineering and electronics. Audio engineering courses at university or college fall into two rough categories: (i) training in the creative use of audio as a sound engineer, and (ii) training in science or engineering topics, which then allows students to apply these concepts while pursuing a career developing audio technologies. Audio training courses give you a good knowledge of technologies and their application to recording studio and sound reinforcement systems, but do not have sufficient mathematical and scientific content to allow you to get a job in research and development in the audio and acoustic industry.[7] 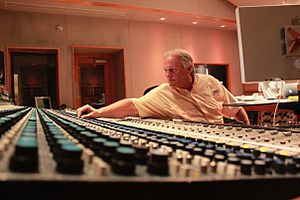 Audio engineers in research and development usually possess a bachelor's degree, master's degree or higher qualification in acoustics, physics, computer science or another engineering discipline. They might work in acoustic consultancy, specializing in architectural acoustics.[8] Alternatively they might work in audio companies (e.g. headphone manufacturer), or other industries that need audio expertise (e.g., automobile manufacturer), or carry out research in a university. Some positions, such as faculty (academic staff) require a Doctor of Philosophy. In Germany a Toningenieur is an audio engineer who designs, builds and repairs audio systems.

The listed subdisciplines are based on PACS (Physics and Astronomy Classification Scheme) coding used by the Acoustical Society of America with some revision.[9]

Audio engineers develop algorithms to allow the electronic manipulation of audio signals. These can be processed at the heart of much audio production such as reverberation, Auto-Tune or perceptual coding (e.g. mp3 or Opus). Alternatively, the algorithms might carry out echo cancellation on Skype, or identify and categorize audio tracks through Music Information Retrieval (e.g., Shazam).[10] 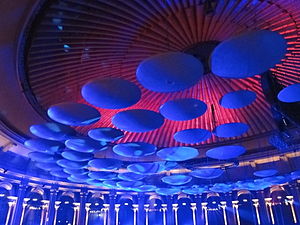 Acoustic diffusing mushrooms hanging from the roof of the Royal Albert Hall. 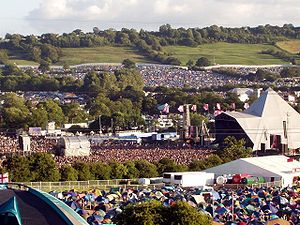 Musical acoustics is concerned with researching and describing the science of music. In audio engineering, this includes the design of electronic instruments such as synthesizers; the human voice (the physics and neurophysiology of singing); computer analysis of audio; music therapy, and the perception and cognition of music.[13]

Psychoacoustics is the scientific study of how humans respond to what they hear. At the heart of audio engineering are listeners who are the final arbitrator as to whether an audio design is successful, such as whether a binaural recording sounds immersive.[10]

The production, computer processing and perception of speech is an important part of audio engineering. Ensuring speech is transmitted intelligibly, efficiently and with high quality; in rooms, through public address systems and through mobile telephone systems are important areas of study.[14] 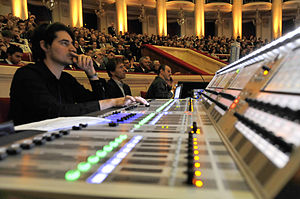 Producer, engineer, and mixer Phil Ek has described audio engineering as the "technical aspect of recording—the placing of microphones, the turning of pre-amp knobs, the setting of levels. The physical recording of any project is done by an engineer ... the nuts and bolts."[1] A variety of terms are used to describe audio engineers who install or operate sound recording, sound reinforcement, or sound broadcasting equipment, including large and small format consoles. Terms such as "audio technician," "sound technician," "audio engineer," "audio technologist," "recording engineer," "sound mixer" and "sound engineer" can be ambiguous; depending on the context they may be synonymous, or they may refer to different roles in audio production. Such terms can refer to a person working in sound and music production; for instance, a "sound engineer" or "recording engineer" is commonly listed in the credits of commercial music recordings (as well as in other productions that include sound, such as movies). These titles can also refer to technicians who maintain professional audio equipment. Certain jurisdictions specifically prohibit the use of the title engineer to any individual not a registered member of a professional engineering licensing body.

In German, the "Tontechniker" (audio technician) is the one who operates the audio equipment and the "Tonmeister" (sound master) is a person who creates recordings or broadcasts of music, who is both deeply musically trained (in classical and non-classical genres), and who also has a detailed theoretical and practical knowledge of virtually all aspects of sound.[citation needed]

Audio engineers come from backgrounds and/or postsecondary training in fields such as audio, fine arts, broadcasting, music, or electrical engineering. Training in audio engineering and sound recording is offered by colleges and universities. Some audio engineers are autodidacts with no formal training, but who have attained professional skills in audio through extensive on-the-job experience.

Audio engineers must have extensive knowledge of audio engineering principles and techniques. They have to understand, to name a few, how to mic different instruments and amplifiers, what types of mics to use, where to place the mics, how to attenuate "hot" instrument signals that are overloading and clipping the channel, how to prevent audio feedback, how to set the audio compression for different instruments and vocals, and how to prevent unwanted distortion of the sound. However, to be a professional sound engineer, an individual needs more than just technical knowledge. She or he must also understand the types of sounds and tones that rock and pop music bands and other musical ensembles expect in different genres. This knowledge of musical styles is typically learned from years of experience listening to and mixing bands in recording and/or live sound contexts. A sound engineer must know, for example, the difference between creating the powerful drum sound that a heavy metal drummer will want for her kit, versus a drummer from a Beatles tribute band.

File:FOH.jpg
At the front of house position, mixing sound for a band

In the recording studio environment, a sound engineer records, edits, manipulates, mixes, or masters sound by technical means to realize the creative vision of the artist and record producer. While usually associated with music production, an audio engineer deals with sound for a wide range of applications, including post-production for video and film, live sound reinforcement, advertising, multimedia, and broadcasting. In larger productions, an audio engineer is responsible for the technical aspects of a sound recording or other audio production, and works together with a record producer or director, although the engineer's role may also be integrated with that of the producer. In smaller productions and studios the sound engineer and producer are often the same person.

According to Women's Audio Mission (WAM), a nonprofit organization based in San Francisco dedicated to the advancement of women in music production and the recording arts, less than 5% of the people creating sound and media are women. Although there are high-achieving female producers, they are less well-known than their male counterparts.[16]"Only three women have ever been nominated for best producer at the Brits or the Grammys" and none won either award.[17] "Women who want to enter the [producing] field face a boys' club, or a guild mentality".[17] The UK "Music Producers' Guild says less than 4% of its members are women" and at the Liverpool Institute of Performing Arts, "...only 6% of the students enrolled on its sound technology course are female."[17]

One of the first women to produce, engineer, arrange and promote music on her own rock and roll music label was Cordell Jackson (1923-2004). Trina Shoemaker is a mixer, record producer and sound engineer who became the first woman to win the Grammy Award for Best Engineered Album in 1998 for her work on The Globe Sessions.[18]

Gail Davies was the '...first female producer in country music, delivering a string of Top 10 hits in the '70s and '80s including "Someone Is Looking for Someone Like You," "Blue Heartache" and "I'll Be There (If You Ever Want Me)." [19] When she moved to Nashville in 1976, men "...didn't want to work for a woman" and she was told women in the city were "...still barefoot, pregnant and [singing] in the vocal booth." [19]

Wendy Waldman, who became a producer after Davies, saw that Davies had a difficult time. When Jonell Polansky arrived in Nashville in 1994, with a degree in electrical engineering and recording experience in the Bay Area, she was told "...[y]ou're a woman, and we already had one"–a reference to Waldman. [19] KK Proffitt, who is a studio "owner and chief engineer" states that men in Nashville do not want to have women in the recording booth. At a meeting of the Audio Engineering Society, Proffitt was told to "shut up" by a male producer when she raised the issue of updating studio recording technologies.[19]Proffitt said she finds "...finds sexism rampant in the industry". [19]

Other notable women include:

There are four distinct steps to commercial production of a recording: recording, editing, mixing, and mastering. Typically, each is performed by a sound engineer who specializes only in that part of production. 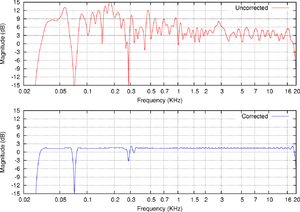 An audio technician is proficient with different types of recording media, such as analog tape, digital multi-track recorders and workstations, and computer knowledge. With the advent of the digital age, it is increasingly important for the audio technician to understand software and hardware integration, from synchronization to analog to digital transfers. In their daily work, audio engineers use many tools, including: