Aurora (/əˈrɔərə/, /əˈrɔːrə/) is a Home Rule Municipality in the U.S. state of Colorado, spanning Arapahoe and Adams counties, with the extreme southeastern portion of the city extending into Douglas County. Aurora is one of the principal cities of the Denver-Aurora-Lakewood, CO Metropolitan Statistical Area (Metro Denver). The city's population was 325,078 in the 2010 census,[7] which made it the third most populous city in the state of Colorado and the 54th most populous city in the United States.

Aurora originated in the 1880s as the town of Fletcher, taking its name from Denver businessman Donald Fletcher who saw it as a real estate opportunity. He and his partners staked out four square miles east of Denver, but the town - and Colorado - struggled mightily after the Silver Crash of 1893. At that point Fletcher skipped town, leaving the community with a huge water debt. Inhabitants decided to rename the town Aurora in 1907, after one of the subdivisions composing the town, and Aurora slowly began to grow in Denver's shadow becoming the fastest-growing city in the United States during the late 1970s and early 1980s. Aurora is composed of hundreds of subdivisions thus carries the name of one of the original development plats from which it sprang.

Although Aurora has long been considered by many[who?] only as one of Denver's larger suburbs, Aurora's growing population in recent decades (now over half the size of Denver) has led to efforts for co-equal recognition with its larger neighbor.[citation needed] Former mayor Dennis Champine once expressed the somewhat whimsical notion that eventually the area would be called the "Aurora/Denver Metropolitan Area". Indeed, since the 2000 Census Aurora has surpassed Denver in land area, and much of Aurora is undeveloped, while Denver is more fully built-out. However, such efforts are somewhat hampered by the lack of a large, historically important central business district in the city. Aurora is largely suburban in character, as evidenced by the city's modest collection of tall buildings.

A large military presence has existed in Aurora since the early 20th century. In 1918, Army General Hospital #21 (later renamed Fitzsimons Army Hospital) opened, with the U.S. government expanding and upgrading the hospital facilities in 1941 just in time to care for the wounded servicemen of World War II. Lowry Air Force Base was opened in 1938, straddling the border of Aurora and Denver. It eventually closed in 1994, and was redeveloped into a master-planned community featuring residential, commercial, business and educational facilities. In 1942, the Army Air Corps built Buckley Field, which over the course of history has been renamed Naval Air Station, Buckley Air National Guard Base and finally Buckley Air Force Base. The base, home of the 460th Space Wing and the 140th Wing Colorado Air National Guard, is Aurora's largest employer.

President Dwight D. Eisenhower recovered from a heart attack at Fitzsimons Army Medical Center for seven weeks during the fall of 1955. In 1943 the hospital was the birthplace of 2004 Democratic presidential candidate John Kerry. Decommissioned in 1999, the facility is part of the Anschutz Medical Campus of the University of Colorado Denver, and the Fitzsimons Life Science District. The Anschutz Medical Campus also includes the University of Colorado Hospital, which moved to Aurora from Denver in 2007, and the Children's Hospital. The first carbon-ion radiotherapy research and treatment facility in the U.S. has been proposed at the site.[10] These facilities will employ a workforce of 32,000 at build-out.

In 1979, it was announced that a science fiction theme park would be built in Aurora using the sets of a 50-million dollar film based on the fantasy novel Lord of Light. However, due to legal problems the project was never completed. The script of the unmade film project, renamed Argo, was used as cover for the "Canadian Caper": the exfiltration of six U.S. diplomatic staff trapped by the Iranian hostage crisis.

In 1993, Cherry Creek State Park on the southwestern edge of Aurora was the location for the papal mass of the 8th World Youth Day with Pope John Paul II, attended by an estimated 500,000 people.[11]

In 2004, Aurora was honored as the Sports Illustrated magazine's 50th Anniversary "Sportstown" for Colorado because of its exemplary involvement in facilitating and enhancing sports. The city attracts more than 30 regional and national sports tournaments annually to Aurora's fields, which include the 220-acre (0.89 km2) Aurora Sports Park opened in 2003. Aurora's active populace is also reflected in the variety of professional athletes hailing from the city. Aurora's first semi-professional sports franchise, the Aurora Cavalry in the International Basketball League, began play in 2006 but folded by season's end due to budget mishaps.[citation needed]

Aurora is split among three counties and lies distant from the respective county seats. A consolidated city and county government was considered in the mid-1990s but failed to win approval by city voters. The issue was reconsidered in 2006.[12] Colorado voters created the City and County of Denver in 1902 and the City and County of Broomfield in 2001. A consolidated city and county of Aurora would likely include areas not within the current city limits, but the new city-county boundaries would be set, restricting future expansion.

In 2008, Aurora was designated an All-America City by the National Civic League.[13]

On July 20, 2012, Aurora was the site of the largest mass shooting in terms of number of casualties in United States history, and the second-deadliest shooting in Colorado since the 1999 Columbine High School massacre.[14] The shooting occurred just after midnight, when James Eagan Holmes opened fire during the midnight premiere of The Dark Knight Rises in a Century movie theater, killing 12 people and injuring 70 others.[15] The shooting drew an international response from world leaders. U.S. President Barack Obama visited victims, as well as local and state officials, and addressed the nation in a televised address from Aurora on July 22. Actor Christian Bale, who plays Batman in the film, also visited some victims in hospitals. The events marked a turning point in recognition and public perception of the city; rather than referring to the site as being in "Denver" or "suburban Denver", as would have been typical before the event, virtually all media accounts of the incident unequivocally named "Aurora" as its location.[16] On August 24, 2015, Holmes was sentenced to life in prison without the possibility of parole.[17][18][19]

Aurora is located at Lua error in Module:Coordinates at line 668: callParserFunction: function "#coordinates" was not found. (39.73, -104.83).[20] The city's official elevation, posted on signs at the city limits, is 5,471 feet (1,668 m). However, the city spans a difference in elevation of nearly 1,000 feet (300 m). The lowest elevation of 5,285 feet (1,611 m) is found at the point where Sand Creek crosses the city limit in the northwest corner of the city, while the highest elevation of 6,229 feet (1,899 m) is on the extreme southern border of the city in Douglas County, near the intersection of Inspiration and Gartrell roads.[21] The city itself has the largest number of enclaves in the state. The city also has four exclaves. 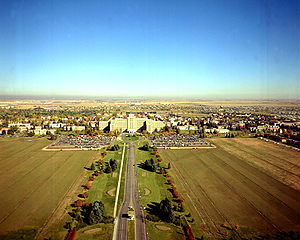 1973 aerial view of Fitzsimons Army Hospital in Aurora, before closure 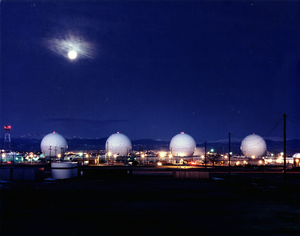 Aurora is composed of dozens of neighborhoods, districts and (current and former) military installations. Among them:[citation needed]

Aurora is a center of Colorado's refugee population. There are about 30,000 Ethiopians and Eritreans living in the Denver-Aurora area. There is also a sizable population of Nepalese refugees.[29][30]

There were 121,191 households out of which 35.5% had children under the age of 18 living with them, 46.9% were married couples living together, 13.1% had a female householder with no husband present, and 34.8% were non-families. 27.4% of all households were made up of individuals and 5.7% had someone living alone who was 65 years of age or older. The average household size was 2.6 and the average family size was 3.2.

According to the Aurora Economic Development Council,[31] the largest public employers in the city are:

According to the Aurora Economic Development Council,[31] the top 10 largest employers in the city are:

Other significant businesses include Mexicana de Aviación,[32] and the Aurora Mental Health Center.

The city of Aurora levies an Occupational Privilege Tax (OPT or Head Tax) on employers and employees.

DeLaney Farm, site of Aurora's famous historic round barn, has 130 acres (0.53 km2) of open space, trails with access to the High Line Canal, an organic garden managed by Denver Urban Gardens, and two structures on the National Register of Historic Places. The Plains Conservation Center, with 1,100 acres (4.5 km2) of native shortgrass prairie, hosts a variety of educational programs.[33]

Twenty-six historic sites and landmarks are managed by the city of Aurora, including the Gully Homestead of 1870, the Victorian-style Centennial House of 1890, the privately owned American War Mothers National Memorial Home, the Art Deco-style KOA Building of 1934, the DeLaney Round Barn of 1902, and Lowry Building 800, the interim headquarters for the U.S. Air Force Academy from 1955 to 1958.[35]

The Aurora Public Library serves its population, providing four main branches, four PC centers, and a variety of events throughout the year to its population.[38]

The city of Aurora operates under a council-manager form of government, where the city manager runs the city's day-to-day operations with general guidance from the city council. The Aurora City Council is composed of a mayor and ten council members. Six members are elected from districts the other four are elected at large. The mayor is elected by the entire city. Aurora's mayor role is largely ceremonial, but the mayor does have direct impact on policy issues as the head of city council.[39]

This full-service city is protected by the Aurora Police Department,[40] one of only 10 law enforcement agencies in Colorado to be accredited by the Commission on Accreditation for Law Enforcement Agencies; the Aurora Fire Department,[41] which is accredited by the Commission on Fire Accreditation International; and a Public Safety Communications dispatch call center.[42] The Aurora Municipal Courts handles a wide variety of offense violations, and the Aurora Detention Center is a 72-hour adult holding facility.[43]

The city of Aurora owns the former Guiraud Ranch in Park County. Now the Buffalo Peaks Ranch, it is located on Colorado State Highway 9 near the ghost town of Garo between Fairplay and Hartsel. The Guiraud Ranch was operated from 1875 until her death in 1909 by the French emigrant, Marie Guiraud.[44]

Aurora straddles Interstate 70, Interstate 225 and the E-470 beltway. The Regional Transportation District's light rail transit system was extended to serve the southwestern edge of Aurora on November 17, 2006. The H Line stops at Aurora's Dayton and Nine Mile Stations; a comprehensive network of feeder buses in southern Aurora serve the latter. An extension of light rail along I-225 through the city is planned to connect with a commuter rail line between downtown Denver and Denver International Airport (DIA), both scheduled for completion by 2017 (see FasTracks). Much of Aurora is more convenient to DIA than Denver itself. This proximity is a factor in the expected growth of the E-470 corridor directly south of DIA, projected to eventually accommodate 250,000 additional Aurora residents.[citation needed]

Aurora has a single sister city, Adama in Ethiopia, which was established in 2014 after Aurora Sister Cities International was resurrected in 2013. Aurora had a previous sister city program from 1988 to 2004.[48]