The Austrian National Library (German: Österreichische Nationalbibliothek, abbreviated ÖNB) is the largest library in Austria, with 7.4 million items in its various collections. The library is located in the Hofburg Palace in Vienna. Since 2005, some of the collections have been relocated within the baroque structure of the Palais Mollard-Clary. Founded by the Habsburgs, the library was originally called the Hof-Bibliothek ("Imperial Library"); the change to the current name occurred in 1920.[1] The library complex includes four museums, as well as multiple special collections and archives. 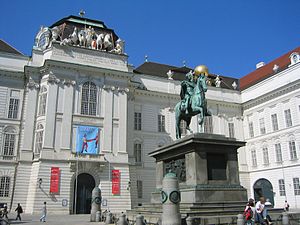 The institution has its origin in the imperial library of the Middle Ages. During the Medieval period, the Austrian Duke Albert III (1349–1395) shifted the books of the Viennese vaults into a library. Albert also organized important works from Latin to be translated into German.[1] In the Hofburg, the treasure of Archduke Albert III had been kept in sacristies inside the south tower of the imperial chapel.[1] The Archduke was a connoisseur of art; he supported the University of Vienna, and he founded a royal workshop for illustrating manuscripts. The oldest book on record at the library, the 1368 golden Holy Gospels, was owned by Albert III; in 1368, Johannes of Troppau, priest at Landskron and canon in Brno, transcribed the four Gospels of the Bible in gold letters with detailed illustrations in the school of Burgundian book art.[1] On scenes depicting the lives of the four Evangelists, four coats of arms show the House of Austria, Tirol, Styria, and Carinthia, the lands which Archduke Albrecht III had ruled at the time.[1]

Frederick III, Holy Roman Emperor (1415–1493), had the goal of summarizing the art treasures among the Habsburg possessions. Among other things, he brought some valuable books into the Vienna, among them the Prager Wenzelsbibel and the document of the golden bull.

Through his marriage with Mary of Burgundy, Maximilian I, Holy Roman Emperor (1459–1519) came into the possession of important books from Burgundy and north France, and brought these to Wiener Neustadt. With a value at that time estimated at 100,000 guldens, these books represented about an eighth of Mary's dowry. Also Maximilian's second wife, Bianca Maria Sforza, brought into the marriage as dowry, among other things, books from Italian workshops.

The books of the library, at that time, were kept partially in Wiener Neustadt, partially in Vienna, and partially in Innsbruck. After the death of Maximilian, the books were sent into the palace at Innsbruck. Besides the valuable books from the public treasury, the Bibliotheca Regia during the 16th century, which collected and categorized scientific works, developed in Vienna. Besides books, that library also contained globes and atlases. The library had expanded, in the course of the time, by donations of the personal libraries of individual scholars.

As the first head librarian, Hugo Blotius was appointed in 1575 by Emperor Maximilian II. His most important task was drawing up the inventory of the library, which had grown to approximately 9,000 books. As a consequence, new works were added systematically, and other libraries were incorporated.

For the first time on August 26, 1624, the delivery was regulated by obligation copies to the library, by order of Ferdinand II. The Imperial Library also grew by purchases. Particularly, the library of Philipp Eduard Fugger led to a major expansion. From the Fugger library, the library currently has about 17,000 sheets of one of the first periodic printing elements, the Fugger newspapers.

In 1722, Charles VI, Holy Roman Emperor authorized the construction of a permanent home for the library in the Hofburg palace, after the plans of Leopold I. The wing was begun by Johann Bernhard Fischer von Erlach and started accommodating the library in the 18th century.

The most valuable addition at that time was the extensive collection of Prince Eugene of Savoy, whose 15,000 volumes included valuable books from France and Italy. The State Hall of the library had housed about 200,000 books at this point.

During the reorganization, for the first time, criticism arose to the fact that the library served mainly as representation rather than for search of knowledge. Doctor Gerard van Swieten, physician to Maria Theresia and his son Gottfried van Swieten, supplemented the collection with numerous scientific works. Thus the library became significant also for scientific work. A success by Gottfried van Swieten was the introduction of the card index. This facilitated the continuous updating of the inventory.

After the Holy Roman Empire of the German nation, the library was again re-organized. Under custodian Paul Strattmann, the library received a program for the first time which described its order; the library gained a three-way viewpoint:

The collection politics of the Imperial Library separated at the beginning the 19th century appreciably due to the requirements of the representation and its attention to scientific works. The multinational condition of the Austrian Empire brought with itself that, not only German-language books were collected, but also books of the Slavic and Hungarian linguistic area. Substantial parts of the Hungarian collection moved to Budapest, however, after reconciliation with Hungary. During the March revolution of 1848, the Imperial Library was in extreme danger, when after the bombardment of Vienna, the Hofburg, in which the Imperial Library was located, burned.

An important addition to the Imperial Library is the papyrus collection, which goes back to the acquisitions of the Viennese of antique dealer Theodor Graf.

After the proclamation of the Republic of Austria, the Imperial Library was renamed in 1920 as the Austrian National Library.[1] The collection politics of intermediate wartime concentrated on "the national literature of those German trunks, which came now under foreign-national rule." The director at that time of the library was Josef Donabaum. Under the line of the general manager, Paul Heigl, during the Nazi period (NS-zeit), hundred of thousands of writings were accommodated here or the library served for majority the worthless, but seized works as transit camps into German libraries.

Renamed again into the Austrian National Library after 1945, small parts were returned again, but the majority remained in the collections. The attention of the collection activity was directed again in small steps toward Central and Eastern Europe.

In 1966, large parts of the collections were moved from the building at Josefsplatz to the premises of the Neue Burg wing at Heldenplatz, where new reading halls were set up. Due to the rising space requirement in 1992, the library opened up to approximately 4 million works. Wider ranges for reading halls were furnished at the same time, so that three levels are currently at the disposal of visitors (two floors of the main reading hall and the magazine reading hall).

For an extensive amount of time, the library used a card-catalog index. Since 1995, an electronic system has been in place, which went online in 1998. As of 2001, books confiscated from Jewish Austrians during World War II have been slowly returned to the heirs. It is estimated that nearly 25,000 works fall into this category.

On January 1, 2002, the library gained the full legal capacity to dismiss staff. This brought the full control to the mechanism in budget and personnel questions. The library has a certain part of its budget funded by the state; additional funds must be raised by sponsorships, reproduction services, and the loaning from the premises. Organizationally, the library uses a central management and has three chief departments (personnel and accounting, inventory structure and treatment, as well as use and information), plus the individual collections.

The head of the library reports to a board of trustees on a quarterly basis. 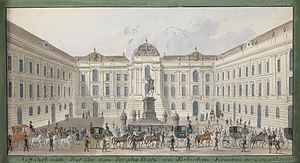 View of the imperial library at Josephsplatz (1835) 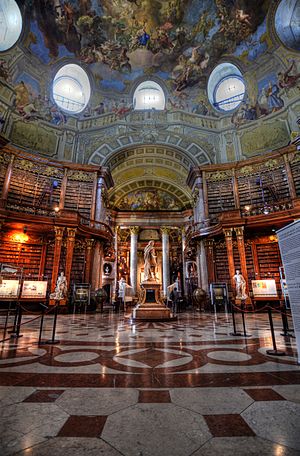 The Prunksaal, center of the old imperial library

The Prunksaal (English: State Hall) is the central structure of the old imperial library and part of the Hofburg palace. The wing is located in-between Josephsplatz to the north and the Burggarten to the south.

The books in the monastery of the Conventual Franciscans (Minoritenkloster) were stored here. The wing was begun in 1721 by Johann Bernhard Fischer von Erlach and finished after his death in 1723 by his son Joseph Emanuel.

The sculptures on the wing are by Lorenzo Mattielli. The hall is divided, after the original list of the books, into two opposite "war" and "peace" sides, which is reflected also in the wall frescoes, from Daniel Gran. The fresco in the central dome represents a kind Apotheosis of Emperor Charles VI, whose image is held by Hercules and Apollo. Around the image of the emperor, several types of allegorical figures meet in a complicated theme, which symbolize the virtues of the Habsburgs and the wealth of their domains.

Located in the hall are marble statues of emperors with the statue of emperor Charles VI in its centre, created by the sculptors Peter Strudel and Paul Strudel. The four large globes are by Vincenzo Coronelli.

During the reign of empress Maria Theresia, cracks started appearing in the dome, in which Court architect Nikolaus Pacassi soon strengthened the dome with an iron ring. The memorial fresco of Gran (in which the trace of a tear can be seen) was restored by Franz Anton Maulbertsch.

Also during her reign, the wing was extended on both ends, connecting the central Prunksaal with the Hofburg and St. Augustine's Church, forming Josefsplatz (Joseph Square).

One of the major tasks of the Austrian National Library is the collection and archiving of all publications appearing in Austria (including electronic media). Depending on the law for the medium, four copies, and by other printing elements, two obligation copies each, must be delivered to the National Library by periodic printing elements appearing in Austria.

In addition, the library collects all works of Austrian authors appearing abroad, as well as such works which concern Austrians or the Austrian spirit and culture. Further publications from the foreign country are taken up with emphasis on the range of the Geisteswissenschaften. Tasks and services of the national library cover the development of the existence and their supply in the form of local-loan, remote-loan, and search services as well as Auskunfts, information and reproduction services.

The legally given general order for education is obeyed also by co-operation with universities, schools and adult education mechanisms.

Altogether, the library has more than seven million objects, of which approximately three million are printed. 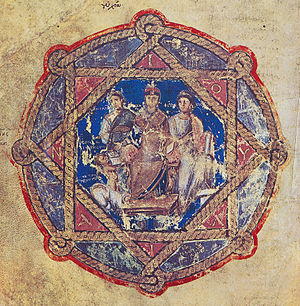 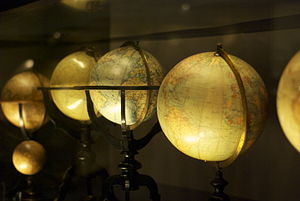 Dating from the 4th century CE to the present, this collection includes antique, medieval and modern manuscripts from almost every literate culture. Notable items in the collection include the Vienna Dioscurides, which was inscribed on UNESCO's Memory of the World Programme Register in 1997 in recognition of its world significance and outstanding universal value.[3]

The map collection includes maps back to the 16th century and it has existed since 1905. After the First World War, the collection of the Habsburgs was taken over, designated as the Habsburg "Family Estate Library" (Familien-Fideikommiss-Bibliothek).

The map collection includes the Globe Museum, containing over 380 globes, some dating back to the 16th century. It is the world's only public globe museum, and has been in existence since 1956. The principal part of the Globe Museum's inventory consists of globes which existed before 1850. There is also technical literature in the collection, plus similar instruments, such as armillary spheres.

The map collection also includes the 17th century Atlas Blaeu-Van der Hem, a 50-volume set that consists of more than 2,400 maps, prints, and drawings and it was inscribed on UNESCO's Memory of the World Programme Register in 2003.[4]

The Papyrus Museum, located in the library in the Neue Burg wing of the Hofburg Palace, has around 200 objects from the collection on display.[6]

Containing old and valuable printings, the collection of Incunabula is one of the five largest collections of historical block printing of the world. As an independent collection, it has existed since 1995 and ranks thereby among the youngest of the library. The collection covers approximately 8,000 incunabula (the fourth largest in existence worldwide), block printings from 1501 to 1850 (e.g. the Fugger newspapers), and bibliophile as well as rare and valuable printings without temporal restriction. The SIAWD collection has also been supplemented with Chinese and Japanese printings.

The Department of Planned Languages and Esperanto Museum incorporates a collection of materials related to planned languages.[7] 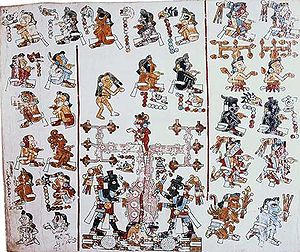