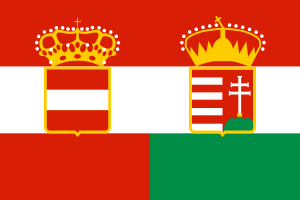 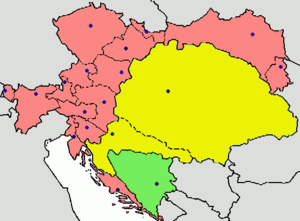 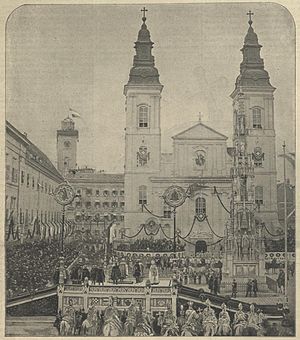 Photo of the coronation oath in Pest 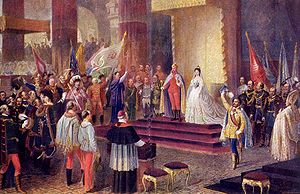 Coronation of Francis Joseph I and Elisabeth Amalie at Matthias Church, Buda, 8 June 1867.

The Austro-Hungarian Compromise of 1867 (German: Ausgleich, Hungarian: Kiegyezés) (alias Composition of 1867) established the dual monarchy of Austria-Hungary. The Compromise re-established partially the sovereignty of the Kingdom of Hungary, separate from, and no longer subject to the Austrian Empire. Under the Compromise, the lands of the House of Habsburg were reorganized as a real union between the Austrian Empire and the Kingdom of Hungary. The Cisleithanian (Austrian) and Transleithanian (Hungarian) regions of the state were governed by separate parliaments and prime ministers. Unity was maintained through rule of a single head of state, reigning as both the Emperor of Austria and King of Hungary, and common monarchy-wide ministries of foreign affairs, defence and finance under his direct authority. The armed forces were combined with the Emperor-King as commander-in-chief.

The names conventionally used for the two realms were derived from the river Leitha, or Lajta, a tributary of the Danube and the traditional border between Austrian and Magyar lands. The Leitha however did not form the entire border nor was its whole course part of the border: the Cis- and Trans- usage was by force of custom rather than geographical accuracy.

According to Emperor Franz Joseph I of Austria only three people contributed to the compromise: "There were three of us who made the agreement: Deák, Andrássy and myself."[1]

In the Middle Ages Austria was a quasi-independent state within the Holy Roman Empire, ruled by the House of Habsburg, while the Kingdom of Hungary was a sovereign state outside the empire. In 1526 at the Battle of Mohács, Hungary was defeated and partially conquered by the Ottoman Empire. The crown of Hungary was inherited by the Habsburgs. The Ottomans were subsequently driven out of Hungary in 1699. From 1526 to 1804, Austria and Hungary were a personal union under the Habsburgs, but remained nominally and legally separate.

In 1804 the Holy Roman Emperor Francis II, who was also ruler of the lands of the Habsburg Monarchy, founded the Empire of Austria, in which all his lands were included. In doing so he created a formal overarching structure for the Habsburg Monarchy, which had functioned as a composite monarchy for about three hundred years. Until the 1848 revolution, the workings of the overarching structure and the status of its component lands stayed much the same as they had been under the composite monarchy that existed before 1804. This was especially demonstrated by the status of the Kingdom of Hungary, a country which had always been considered a separate realm—a status that was affirmed by Article X, which was added to Hungary's constitution in 1790 during the phase of the composite monarchy and described the state as a Regnum Independens. Hungary's affairs remained administered by its own institutions (King and Diet) as they had been beforehand. Thus under the new arrangements no Imperial institutions were involved in its internal government.[2][3][4] The Holy Roman Empire was abolished in 1806.

In the failed Hungarian Revolution of 1848, the Magyars came close to regaining independence, and were defeated by the Austrian Empire only with the aid of the Russian Empire. Prime Minister Félix von Schwarzenberg and his government, operating since November 1848, pursued radically new imperial policy. It wanted to develop a uniform empire in the spirit of the imperial constitution issued by Franz Joseph I in Olmütz on 4 March 1849, and as a result, Hungary's constitution and her territorial integrity were abolished and she became subsumed into the hereditary lands. After the 1848-49 Hungarian War of Independence, a military dictatorship was created in Hungary. Every aspect of Hungarian life was put under close scrutiny and governmental control. The territory of the country was partitioned into crown lands, and the Hungarian government and Hungarian parliament were suspended. This started an era of absolutist rule in Hungary.[5]

German became the official language of public administration. The edict issued on 9 October 1849[6] placed education under state control, the curriculum was prescribed and controlled by the state, the education of national history was confined, and history was taught from a Habsburg viewpoint.[7] Even the bastion of Hungarian culture, the Academy was kept under control: the institution was staffed with foreigners, mostly Germans, and the institution was practically defunct until the end of 1858.[8][9][10] Hungarians responded with passive resistance. Anti-Habsburg and anti-German sentiments were strong. In the following years, the empire instituted several reforms, but failed to resolve these problems.[11]

In 1866, Austria was completely defeated in the Austro-Prussian War and its position as the leading state of Germany ended forever, as the remaining German minor states were soon absorbed into the German Empire created by Prussia. Austria also lost almost all of its remaining claims and influence in Italy, which had been its chief foreign policy interest.

The state needed to redefine itself to maintain unity in the face of nationalism.[12]

As a consequence of the Franco-Austrian War, and the Austro-Prussian War the Habsburg Empire was on the verge of collapse in 1866, as these military endeavours resulted in monumental state debt, and a financial crisis.[13]

The Habsburgs were forced to reconcile with Hungary to save their empire and dynasty. The Habsburgs and part of the Hungarian political elite arranged the Austro-Hungarian Compromise of 1867, despite the fact that the overwhelming majority of the populace wanted full independence.

Hungarian statesman Ferenc Deák (Francis Deak) is considered the intellectual force behind the Compromise. Deák initially wanted independence for Hungary and supported the 1848 Revolution, but he broke with hardline nationalists and advocated a modified union under the Habsburgs. Deák took the line that, while Hungary had the right to full internal independence, questions of defence and foreign affairs were "common" to both Austria and Hungary under the Pragmatic Sanction. He also felt that Hungary benefited through continued unity with wealthier, more industrialized Austria, and that the Compromise would end the pressures on Austria of continually choosing between the Magyar and Slav populations of the Kingdom of Hungary.[14] Imperial Chancellor Beust quickly negotiated the Compromise with the Hungarian leaders.[15] Beust was particularly eager to renew the conflict with Prussia, and thought a quick settlement with Hungary would make that possible.[16] Franz Joseph and Deák signed the Compromise, and it was ratified by the restored Diet of Hungary on 29 May 1867.[17]

The Compromise was negotiated and legitimised by only a very small part of Hungarian society (suffrage was very limited: less than 8 percent of the population had voting rights), and was seen by a very large part of the population as a betrayal of the Hungarian cause and the heritage of the 1848-49 War of Independence. The Compromise was very unpopular and the government resorted to force to suppress civil dissent. The Compromise caused deep and lasting schisms in Hungarian society.[18]

Under the Compromise, Austria and Hungary had separate parliaments that met in Vienna and Buda (later Budapest), respectively, that passed and maintained separate laws. Each region had its own government, headed by its own prime minister. The "dual monarchy" consisted of the emperor-king, and the common ministers of foreign affairs, defence, and finance in Vienna. The monetary and economic terms of the Compromise were renegotiated every ten years.

Under the terms of the Compromise Hungary took over a large part of the towering Austrian state debt.[20]

This meant a strong reduction in Hungarian sovereignty and autonomy even in comparison with the pre-1848 status quo.

Despite Austria and Hungary sharing a common currency, they were fiscally sovereign and independent entities.[21]

The resulting system was maintained until the dissolution of the dual monarchy following World War I. The favoritism shown to the Magyars, the second largest ethnic group in the dual monarchy after the Germans, caused discontent on the part of other ethnic groups like the Slovaks and Romanians.[22] Although a "Nationalities Law" was enacted to preserve the rights of ethnic minorities, the two parliaments took very different approaches to this issue.

The basic problem in the later years was that the Compromise with Hungary only encouraged the appetites of non-Hungarian minorities in Hungary that were historically within the boundaries of the Hungarian Kingdom. The majority of Hungarians felt they had accepted the Compromise only under coercion. The Austrian Archduke, separately crowned King of Hungary, had to swear in his coronation oath not to revise or diminish the historic imperial (Hungarian) domains of the Hungarian nobility, magnates, and upper classes. These Hungarian groups never acquiesced to granting "their" minorities the recognition and local autonomy which the Austrians had given to the Magyars themselves in the Compromise.

In the Kingdom of Hungary, several ethnic minorities faced increased pressures of Magyarization.[23] Further, the renegotiations that occurred every ten years often led to constitutional crises. Ultimately, although the Compromise hoped to fix the problems faced by a multi-national state while maintaining the benefits of a large state, the new system still faced the same internal pressures the old had. To what extent the dual monarchy stabilized the country in the face of national awakenings and to what extent it alleviated, or aggravated, the situation are debated even today.

In a letter of February 1, 1913, to Berchtold, his Foreign Minister, Archduke Franz Ferdinand said that "irredentism in our country ... will cease immediately if our Slavs are given a comfortable, fair and good life" instead of being trampled on (as they were being trampled on by the Hungarians).[24]

With the political agenda dominated by war and imminent defeat, in the middle of October 1918 the Hungarian government, with the agreement of King Charles IV of Hungary (who was also the Austrian Emperor Charles I), gave notice of termination. The 1867 compromise was formally terminated on 31 October 1918. Shared institutions such as the Council of Ministers remained formally in force until 2 November 1918, but by this time for all practical purposes power had devolved from Budapest to the various emerging nationally based regions that would form the basis for the redrawing of the map of middle Europe at the Paris Peace Conference, 1919 which formally began its own work early in 1919.