The Krone or korona (German: Österreichisch-ungarische Krone, Hungarian: osztrák-magyar korona, Czech: rakousko-uherská koruna, Slovak: rakúsko-uhorská koruna) was the official currency of the Austro-Hungarian Empire from 1892 (when it replaced the gulden, forint, florén or zlatka as part of the adoption of the gold standard) until the dissolution of the empire in 1918. The subunit was one hundredth of the main unit, and it was called Heller in the Austrian and fillér (or halier in Slovak) in the Hungarian part of the Empire. 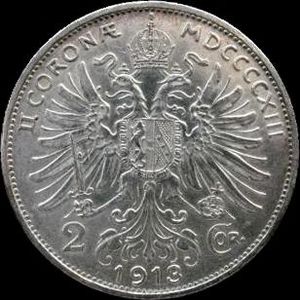 The official name of the currency was Krone (pl. Kronen) in Austria and Osztrák–magyar korona in Hungary. The Latin form Corona (plural Coronæ), abbreviated to Cor. on the smaller coins, was used for the coinage of the mostly German-speaking part of the empire, known as Cisleithania. Currency names in other ethnic languages were also recognised and appeared on the banknotes: koruna (pl. korun) in Czech, korona (pl. korony) in Polish, корона, korona (pl. корон, koron) in Ukrainian, corona (pl. corone) in Italian, krona (pl. kron) in Slovene, kruna (pl. kruna) in Croatian, круна, kruna (singular and plural) in Serbian,koruna (pl. korún) in Slovak, and coroană (pl. coroane) in Romanian. Its counterpart in English is crown.

The symbol of the currency was its abbreviation: K. or sometimes Kr.

After several earlier attempts the Austro-Hungarian Empire adopted the gold standard in 1892 according to the plan of Sándor Wekerle minister of finance. This plan included the introduction of the new currency, the Krone. It consisted of 100 Heller (Austria) or Fillér (Hungary). The value of the Krone was set at 2 Kronen = 1 Gulden (Florin, or forint in Hungarian) of the previous silver-based currency. From 1900 onwards, Krone notes were the only legal banknotes of the Empire.

The value of the currency depreciated sharply as a result of the First World War, which was financed mostly by the issue of War Bonds rather than through taxation. Consumer prices rose sixteenfold during the war, as the government had no hesitation in running the Austro-Hungarian Bank's printing presses to pay its bills and triggering a higher inflation rate than in the other combatant countries. 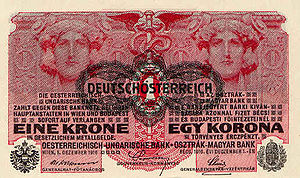 A note overstamped to restrict its circulation to the new Republic of Austria. High inflation led to a change of currency from the old Krone to the new Schilling in 1924

After the end of the First World War it was initially hoped that the Krone could continue as a common currency of the Empire's successor states, but in January 1919 the Kingdom of Serbs, Croats, and Slovenes (later Yugoslavia) became the first successor state to overstamp the Austro-Hungarian Bank's notes to limit their validity to its own territory. Czechoslovakia followed suit in February 1919, and on 12 March 1919 the new Republic of Austria stamped the notes circulating in its territory with "DEUTSCHÖSTERREICH".

The Austrian economy did not stabilise after the war, and a period of hyperinflation followed: money supply increased from 12 to 30 billion Kronen in 1920, to about 147 billion Kronen at the end of 1921. In August 1922, consumer prices were 14 000 times greater than before the start of the war eight years earlier. The highest value banknote issued was for 500 000 Kronen, in 1922. Faith in the currency had been lost, and money was spent as fast as it was received. In October 1922 Austria secured a loan of 650 million gold Kronen from the League of Nations, with a League of Nations Commissioner supervising the country's finances. This had the effect of stabilizing the currency at a rate of 14,400 paper Kronen to 1 gold Krone. On 2 January 1923 the Austrian National Bank (Österreichische Nationalbank) started operations, and took over control of the currency from the Austro-Hungarian Bank which had gone into liquidation.

In December 1923 the Austrian Parliament authorised the government to issue silver coins of 5000, 10 000, and 20 000 kronen which were to be designated half-Schilling, Schilling, and double Schilling. The Schilling became the official Austrian currency on 20 December 1924, at a rate of 10 000 Kronen to 1 Schilling.

Croatia, Slovenia and Bosnia and Hercegovina

In these parts of Austria-Hungary, which became part of the Kingdom of the Serbs, Croats and Slovenes (later Yugoslavia) in 1918, Krone banknotes were stamped by the new authorities and became issues of the Serb, Croat and Slovene krone. This was replaced in 1920 by the dinar at the rate of 1 dinar = 4 Kronen.

In Czechoslovakia, the currency was superseded by the koruna, at par. The name of the Austro-Hungarian Krone and Heller currency is still echoed in the contemporary koruna and haléř currency of the Czech Republic as well as the pre-2009 koruna and halier currency of Slovakia. 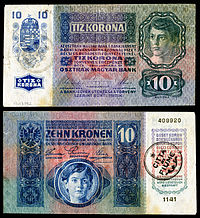 In Hungary the Austro-Hungarian currency was overstamped and then replaced by the Hungarian korona at par. This new currency was in circulation only for a few years and was subject of hyperinflation - due to the consequences of World War I and the Treaty of Trianon. The currency was replaced by the pengő on 21 January 1927, at a rate of 12 500 korona to 1 pengő. 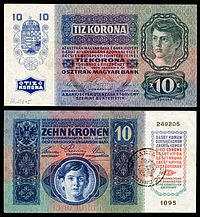 Krone / korona banknotes were designed and printed in Vienna from 1900. All banknotes issued by the Austro-Hungarian Bank were bilingual, and the denomination was indicated in ethnic languages, too. The same banknotes were used all over the Monarchy. Until World War I, all banknotes had a German and a Hungarian side; under the war, some banknotes were issued with text in both languages on one side. Most important designers: Koloman Moser, Rudolf Rössler, Josef Pfeiffer, László Hegedűs. Engraver: Ferdinand Schirnböck.