Austro-Tai is a hypothesis that the Tai–Kadai and Austronesian language families of southern China and the Pacific are genealogically related. Related proposals include Austric (Wilhelm Schmidt 1906) and Sino-Austronesian (Laurent Sagart 2005b).

The Tai–Kadai languages contain numerous similar forms with Austronesian which were noticed as far back as Schlegel in 1901.[1] These are considered to be too many to explain as chance resemblance.[2] The question then is whether they are due to language contact—i.e. borrowing—or to common descent—i.e. a genealogical relationship. 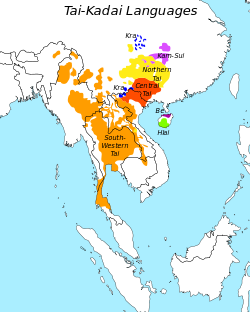 The first proposal of a genealogical relationship was that of Paul Benedict in 1942, which he expanded upon through 1990. This took the form of an expansion of Wilhelm Schmidt's Austric phylum, and posited that Tai–Kadai and Austronesian had a sister relationship within Austric, which Benedict then accepted. Benedict later abandoned Austric but maintained his Austro-Tai proposal. This remained controversial among linguists, especially after the publication of Benedict (1975) whose methods of reconstruction were idiosyncratic and considered unreliable. For example, Thurgood (1994) examined Benedict's claims and concluded that since the sound correspondences and tonal developments were irregular, there was no evidence of a genealogical relationship, and the numerous cognates must be chalked up to early language contact.

However, the fact that many of the Austro-Tai cognates are found in core vocabulary, which is generally resistant to borrowing, continued to intrigue scholars. There were later several advances over Benedict's approach: Abandoning the larger Austric proposal; focusing on lexical reconstruction and regular sound correspondences; including data from additional branches of Tai–Kadai, Hlai and Kra; using better reconstructions of Tai–Kadai; and reconsidering the nature of the relationship, with Tai–Kadai possibly being a branch (daughter) of Austronesian.

Sagart (2005a) cited a core of regular sound correspondences relating words belonging to the basic vocabulary in Benedict’s work. He pointed out the lack of a substantial body of shared cultural words. He took these facts as indications that Benedict’s Austro-Tai cannot be explained as a contact phenomenon. He further listed a number of specifically Malayo-Polynesian features in the vocabulary shared by Tai-Kadai and Austronesian, concluding that Tai-Kadai is a subgroup within, rather than a related group of, Austronesian.

Ostapirat (2000) reconstructed proto-Kra, one of the least-well attested branches of Tai–Kadai. In (Ostapirat 2005) he presents fifty core vocabulary items found in all five branches of Tai–Kadai, and demonstrated that half of them—words such as child, eat, eye, fire, hand, head, I, you, louse, moon, tooth, water, this, etc.—can be related to proto-Austronesian by regular sound correspondences, a connection which Reid (2006) finds convincing.[3]

Austronesian is characterized by disyllabic roots, whereas Tai–Kadai is predominantly monosyllabic. It appears that in Tai–Kadai, the first vowel reduced and then dropped out, leaving a consonant cluster which frequently reduced further to a single consonant. For example, the proto-Austronesian root *qudip "live, raw" corresponds to proto-Kra (k-)Dep > Laha ktʰop and Tai dip "id." (the *-D- consonant is Ostapirat's voiced plosive of undetermined quality, probably alveolar as opposed to dental articulation[4]).

In proto-Tai–Kadai, there appear to have been three tones in words ending in a sonorant (vowel or nasal consonant), labeled simply A, B, C, plus words ending in an stop consonant, D, which did not have tone. In general, Austronesian words ending in a sonorant correspond to A, and words ending in a stop correspond to D. This accounts for most of the words. There are also a few cognates with B and C tone. From Indic borrowings it appears that tone B was originally a final h in Tai–Kadai, and some of the corresponding Austronesian roots also end in h, such as AN *qəmpah "chaff", Kam–Sui paa-B (Mulam kwaa-B), though there are few examples to go on. Tone C seems to have originally been creaky voice or a final glottal stop. It may correspond to *H, a laryngeal consonant of uncertain manner, in proto-Austronesian (AN *quluH "head", Thai klau-C), but again the number of cognates is too low to draw firm conclusions.

Sagart (2004) presented data from a newly described Kra language, Buyang, which—like many other Kra languages—retains the disyllabic roots characteristic of Austronesian. Some examples are:

Among scholars who accept the evidence as definitive, there is disagreement as to the nature of the relationship. Benedict attempted to show that Tai–Kadai has features which cannot be accounted for by proto-Austronesian, and that therefore it must be a separate family coordinate with Austronesian (a sister relationship). Ostapirat concluded that these reconstructed linguistic features are spurious. However, he could not rule out the possibility that Tai–Kadai tone cannot be explained, and so leaves the question open pending further reconstruction of proto-Austronesian. He supports the consensus hypothesis of several scholars that proto-Austronesian was spoken on Formosa or adjacent areas of coastal China, and that the likely homeland of proto-Tai–Kadai was coastal Fujian or Guangdong as part of the neolithic Longshan culture[citation needed]. The spread of the Tai–Kadai peoples may have been aided by agriculture, but any who remained near the coast were eventually absorbed by the Chinese.

Sagart, on the other hand, holds that Tai–Kadai is a branch of Austronesian which migrated back to the mainland from northeastern Formosa long after Formosa was settled, but probably before the expansion of Malayo-Polynesian out of Formosa. The language was then largely relexified from what he believes may have been an Austroasiatic language.

However, Ostapirat maintains that Tai–Kadai could not descend from Malayo-Polynesian in the Philippines, and likely not from the languages of eastern Formosa either. His evidence is in the Tai–Kadai sound correspondences, which reflect Austronesian distinctions that were lost in Malayo-Polynesian and even Eastern Formosan. These are proto-AN *t and *C, also *n and *N, which were distinct in proto-Tai–Kadai but which fell together as *t and *n in proto-MP and Eastern Formosan; and *S, which is *s in proto-Tai–Kadai but *h in proto-MP. There are also Austro-Tai roots which are not attested from Malayo-Polynesian, such as *Cumay "bear". (Western MP has *biRuaŋ.) Such roots are retentions from Proto-Austronesian shared by Tai-Kadai and Formosan, and lost in Malayo-Polynesian, in Sagart's view.

Sagart (2005b) proposes an Eastern Formosan–Malayo-Polynesian connection with Tai–Kadai, based on words such as proto-Tai–Kadai *maNuk and Eastern Formosan *manuk "bird", as compared to proto-Austronesian, where the word for "bird" was *qayam, and *maNuk meant "chicken" (cf. English "fowl", which once meant "bird" but has come to usually refer to chickens and other birds raised for meat), and a few other words such *-mu "thou" which have not been reconstructed for proto-Austronesian. However, Ostapirat notes Tai–Kadai retains the Austronesian *N in this word, which had been lost from Eastern Formosan and Malayo-Polynesian, and that a change in meaning from "chicken" to "bird" could easily have happened independently, for example among proto-Tai–Kadai speakers when they borrowed the mainland word *ki "chicken" (cognate with Old Chinese *kej and Miao /qai/).

Sagart (2004) presents a distinct argument for subgrouping Tai-Kadai with Malayo-Polynesian: he argues that the numerals 5–10, shared by Tai-Kadai, Malayo-Polynesian and three southeastern Formosan languages, are post-proto-Austronesian innovations. Part of the problem of evidence may be due to the loss of the ancestral languages in the Philippines: the uniformity of Philippine languages suggests widespread language replacement after the expected time of the Tai–Kadai split.

Sagart (2005b) suggests that Austronesian (including Tai-Kadai) is ultimately related to the Sino-Tibetan languages, forming a Sino-Austronesian family. The Proto-Sino-Austronesian speakers would have originated from the Neolithic communities of the coastal regions of prehistoric North China or East China. Ostapirat disputes this view, noting that the apparent cognates are rarely found in all branches of Tai–Kadai, and almost none in core vocabulary. Apparent connections with Austroasiatic languages, per Benedict, may be due to language contact when the ancestral Tai–Kadai language reached the mainland.

Roger Blench notes that Daic-speaking and Austronesian-speaking peoples had many customs in common.[8]