From Infogalactic: the planetary knowledge core
Jump to: navigation, search
Not to be confused with Austronesian languages.

The Austroasiatic languages,[2] in recent classifications synonymous with Mon–Khmer,[3] are a large language family of continental Southeast Asia, also scattered throughout India, Bangladesh, Nepal and the southern border of China. The name Austroasiatic comes from the Latin words for "south" and "Asia", hence "South Asia". Of these languages, only Vietnamese, Khmer, and Mon have a long-established recorded history, and only Vietnamese and Khmer have official status (in Vietnam and Cambodia, respectively). The rest of the languages are spoken by minority groups. Ethnologue identifies 168 Austroasiatic languages. These form thirteen established families (plus perhaps Shompen, which is poorly attested, as a fourteenth), which have traditionally been grouped into two, as Mon–Khmer and Munda. However, one recent classification posits three groups (Munda, Nuclear Mon-Khmer and Khasi-Khmuic)[4] while another has abandoned Mon–Khmer as a taxon altogether, making it synonymous with the larger family.[5]

Austroasiatic languages have a disjunct distribution across India, Bangladesh, Nepal and Southeast Asia, separated by regions where other languages are spoken. They appear to be the autochthonous languages of Southeast Asia, with the neighboring Indo-Aryan, Tai–Kadai, Dravidian, Austronesian, and Sino-Tibetan languages being the result of later migrations.[6]

The Austroasiatic languages are well known for having a "sesquisyllabic" pattern, with basic nouns and verbs consisting of a reduced minor syllable plus a full syllable. Many of them also have infixes. The Austroasiatic languages are further characterized as having unusually large vowel inventories and employing some sort of register contrast, either between modal (normal) voice and breathy (lax) voice or between modal voice and creaky voice.[7] Languages in the Pearic branch and some in the Vietic branch can have a three- or even four-way voicing contrast. However, some Austroasiatic languages have lost the register contrast by evolving more diphthongs or in a few cases, such as Vietnamese, tonogenesis.

Paul Sidwell (2005) reconstructs the consonant inventory of Proto-Mon–Khmer as follows:

This is identical to earlier reconstructions except for *ʄ. *ʄ is better preserved in the Katuic languages, which Sidwell has specialized in. Sidwell (2011) suggests that the likely homeland of Austroasiatic is the middle Mekong, in the area of the Bahnaric and Katuic languages (approximately where modern Laos, Thailand, and Cambodia come together), and that the family is not as old as frequently assumed, dating to perhaps 2000 BCE.[6]

Linguists traditionally recognize two primary divisions of Austroasiatic: the Mon–Khmer languages of Southeast Asia, Northeast India and the Nicobar Islands, and the Munda languages of East and Central India and parts of Bangladesh. However, no evidence for this classification has ever been published.

Each of the families that is written in boldface type below is accepted as a valid clade. By contrast, the relationships between these families within Austroasiatic is debated. In addition to the traditional classification, two recent proposals are given, neither of which accept traditional "Mon–Khmer" as a valid unit. However, little of the data used for competing classifications has ever been published, and therefore cannot be evaluated by peer review.

In addition, there are suggestions that additional branches of Austroasiatic might be preserved in substrata of Acehnese in Sumatra (Diffloth), the Chamic languages of Vietnam, and the Land Dayak languages of Borneo (Adelaar 1995).[8] 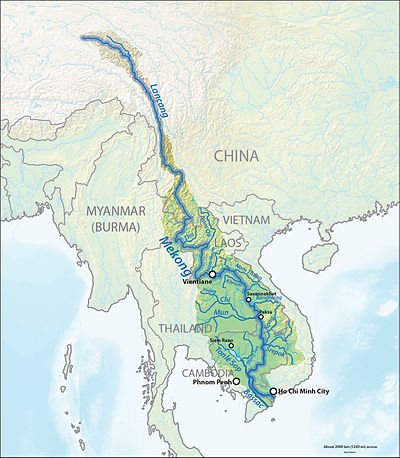 Paul Sidwell and Roger Blench propose that the Austroasiatic phylum had dispersed via the Mekong River drainage basin.

Paul Sidwell (2009a), in a lexicostatistical comparison of 36 languages which are well-known enough to exclude loan words, finds little evidence for internal branching, though he did find an area of increased contact between the Bahnaric and Katuic languages, such that languages of all branches apart from the geographically distant Munda and Nicobarese show greater similarity to Bahnaric and Katuic the closer they are to those branches, without any noticeable innovations common to Bahnaric and Katuic. He therefore takes the conservative view that the thirteen branches of Austroasiatic should be treated as equidistant on current evidence. Sidwell & Blench (2011) discuss this proposal in more detail, and note that there is good evidence for a Khasi–Palaungic node, which could also possibly be closely related to Khmuic.[6] If this would the case, Sidwell & Blench suggest that Khasic may have been an early offshoot of Palaungic that had spread westward. Sidwell & Blench (2011) suggest Shompen as an additional branch, and believe that a Vieto-Katuic connection is worth investigating. In general, however, the family is thought to have diversified too quickly for a deeply nested structure to have developed, since Proto-Austroasiatic speakers are believed by Sidwell to have radiated out from the central Mekong River valley relatively quickly.

Roger Blench (2009)[9] also proposes that there may have been other primary branches of Austroasiatic that are now extinct, based on substrate evidence in modern-day languages.

Other languages with proposed Austroasiatic substrata are:

Diffloth compares reconstructions of various clades, and attempts to classify them based on shared innovations, though like other classifications the evidence has not been published. As a schematic, we have:

Or in more detail,

Aslian: 19 languages of peninsular Malaysia and Thailand.
Monic: 2 languages, the Mon language of Burma and the Nyahkur language of Thailand.

This family tree is consistent with recent studies of migration of Y-Chromosomal haplogroup O2a1-M95. However, the dates obtained from by Zhivotovsky method DNA studies are several times older than that given by linguists.[15] The route map of the people with haplogroup O2a1-M95, speaking this language can be seen in this link.[16] Other geneticists criticise the Zhivotovsky method.

Peiros is a lexicostatistic classification, based on percentages of shared vocabulary. This means that a language may appear to be more distantly related than it actually is due to language contact. Indeed, when Sidwell (2009a) replicated Peiros's study with languages known well enough to account for loans, he did not find the internal (branching) structure below. 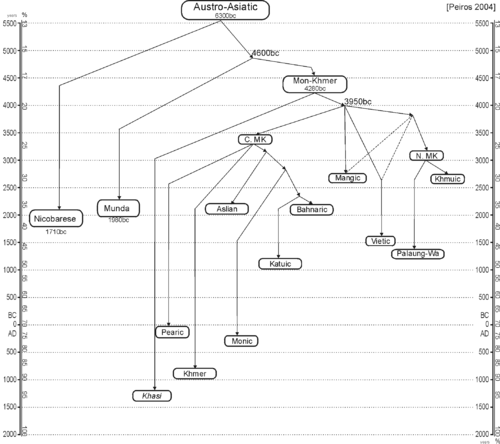 Diffloth's widely cited original classification, now abandoned by Diffloth himself, is used in Encyclopædia Britannica and—except for the breakup of Southern Mon–Khmer—in Ethnologue.