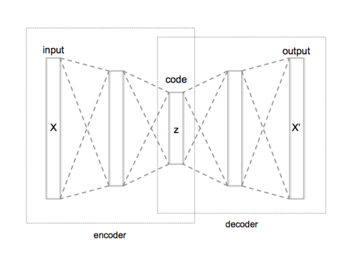 Schematic structure of an autoencoder with 3 fully-connected hidden layers.

An autoencoder, autoassociator or Diabolo network[1]:19 is an artificial neural network used for learning efficient codings.[2][3] The aim of an autoencoder is to learn a representation (encoding) for a set of data, typically for the purpose of dimensionality reduction. Recently, the autoencoder concept has become more widely used for learning generative models of data.[4][5]

Architecturally, the simplest form of an autoencoder is a feedforward, non-recurrent neural net which is very similar to the multilayer perceptron (MLP), with an input layer, an output layer and one or more hidden layers connecting them. The differences between autoencoders and MLPs, though, are that in an autoencoder, the output layer has the same number of nodes as the input layer, and that, instead of being trained to predict the target value

, autoencoders are trained to reconstruct their own inputs

An autoencoder always consists of two parts, the encoder and the decoder, which can be defined as transitions

In the simplest case, where there is one hidden layer, an autoencoder takes the input

and maps it onto

This is usually referred to as code or latent variables (latent representation). Here,

is an element-wise activation function such as a sigmoid function or a rectified linear unit. After that,

is mapped onto the reconstruction

of the same shape as

Autoencoders are also trained to minimise reconstruction errors (such as squared errors):

If the feature space

has less dimensionality than the input space

, then the feature vector

can be regarded as a compressed representation of the input

. If the hidden layers are larger than the input layer, an autoencoder can potentially learn the identity function and become useless. However, experimental results have shown that autoencoders might still learn useful features in these cases.[1]:19

Various techniques exist to prevent autoencoders from learning the identity function and to improve their ability to capture important information and learn richer representations.

Denoising autoencoders take a partially corrupted input whilst training to recover the original undistorted input. This technique has been introduced with a specific approach to good representation.[6] A good representation is one that can be obtained robustly from a corrupted input and that will be useful for recovering the corresponding clean input. This definition contains the following implicit assumptions:

To train an autoencoder to denoise data, it is necessary to perform preliminary stochastic mapping

in order to corrupt the data and use

as input for a normal autoencoder, with the only exception being that the loss should be still computed for the initial input

Variational autoencoder models inherit autoencoder architecture, but make strong assumptions concerning the distribution of latent variables. They use variational approach for latent representation learning, which results in an additional loss component and specific training algorithm called Stochastic Gradient Variational Bayes (SGVB).[4] It assumes that the data is generated by a directed graphical model

denote the parameters of the encoder (recognition model) and decoder (generative model). The objective of the variational autoencoder in this case has the following form:

stands for the Kullback–Leibler divergence of the approximate posterior from the prior, and the second term is an expected negative reconstruction error. The prior over the latent variables is set to be the centred isotropic multivariate Gaussian

Relationship with Other Methods

If linear activations are used, or only a single sigmoid hidden layer, then the optimal solution to an autoencoder is strongly related to principal component analysis (PCA).[7]

The training algorithm for an autoencoder can be summarized as

For each input x,

Do a feed-forward pass to compute activations at all hidden layers, then at the output layer to obtain an output

Measure the deviation of

An autoencoder is often trained using one of the many variants of backpropagation (such as conjugate gradient method, steepest descent, etc.). Though these are often reasonably effective, there are fundamental problems with the use of backpropagation to train networks with many hidden layers. Once errors are backpropagated to the first few layers, they become minuscule and insignificant. This means that the network will almost always learn to reconstruct the average of all the training data.[citation needed] Though more advanced backpropagation methods (such as the conjugate gradient method) can solve this problem to a certain extent, they still result in a very slow learning process and poor solutions. This problem can be remedied by using initial weights that approximate the final solution. The process of finding these initial weights is often referred to as pretraining.

Geoffrey Hinton developed a pretraining technique for training many-layered "deep" autoencoders. This method involves treating each neighboring set of two layers as a restricted Boltzmann machine so that the pretraining approximates a good solution, then using a backpropagation technique to fine-tune the results.[8]