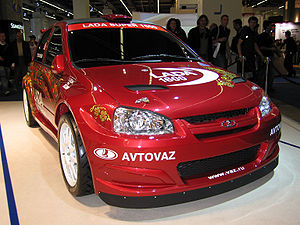 A Lada Kalina Super 1600, painted in khokhloma national ornaments. Lada is the brand of AvtoVAZ, the largest Russian car manufacturer.

Automotive production is a significant industry in Russia, directly employing around 600,000 people or 1% of the country's total workforce. Russia was at Nr 15 of car producing nations in 2010, and accounts for about 2% of the worldwide production. In 2009 the industry produced 599,265 cars,[1] down from 1,469,429 in 2008[2] due to the global financial crisis, and 1,895,474 vehicles in 2014.[3] The largest companies are light vehicle producers AvtoVAZ and GAZ, while KamAZ is the leading heavy vehicle producer. Eleven foreign carmakers have production operations or are constructing their plants in Russia. 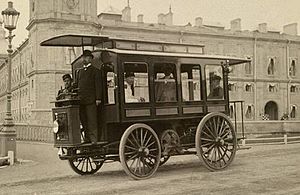 The Russian Empire had a long history of progress in the development of machinery. As early as in the eighteenth century Ivan I. Polzunov constructed the first two-cylinder steam engine in the world,[4] while Ivan P. Kulibin created a human-powered vehicle that had a flywheel, a brake, a gearbox, and roller bearings.[5] One of the world's first tracked vehicles was invented by Fyodor A. Blinov in 1877.[6] In 1896, the Yakovlev engine factory and the Freze carriage-manufacturing workshop manufactured the first Russian petrol-engine automobile, the Yakovlev & Freze.[7] The turn of the nineteenth and twentieth centuries was marked by the invention of the earliest Russian electrocar, nicknamed the “Cuckoo”, which was created by the engineer Hippolyte V. Romanov in 1899. Romanov also constructed a battery-electric omnibus.[8] In the years preceding the 1917 October Revolution, Russia produced a growing number of Russo-Balt, Puzyryov, Lessner, and other vehicles, held its first motor show in 1907[9] and had car enthusiasts who successfully participated in international motor racing. A Russo-Balt car placed 9th in the Monte Carlo Rally of 1912, despite the extreme winter conditions that threatened the lives of the driver and riding mechanic on their way from Saint Petersburg,[10] 2nd in the San Sebastián Rally and covered more than 15,000 km in Western Europe and Northern Africa in 1913. The driver of the car, Andrei P. Nagel, was personally awarded by Emperor Nicholas II for increasing the prestige of the domestic car brand.[11] In 1916, as part of the government program of building six large automobile manufacturing plants, the Trading House Kuznetsov, Ryabushinsky & Co. established AMO (later renamed to First State Automobile Factory, ZIS, and ZIL), but none of the plants were finished due to the political and economic collapse that followed in 1917. 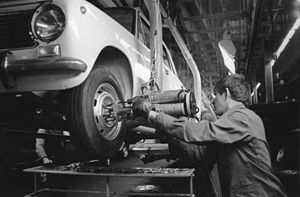 The AvtoVAZ assembly line in 1969

The Soviet Union possessed a large automotive industry. In late 1987, the industry produced 2 million cars, satisfying 45% of the domestic demand.[12] But after the dissolution of the Soviet Union Russian automakers were integrated into a market economy and immediately hit by a crisis due to the loss of financial support, economic turmoil, criminal activities[13][14][15] and stiffer competition in the domestic market during the 1990s. Some of them, like AvtoVAZ, turned to cooperation with other companies (such as GM-AvtoVAZ) in order to obtain substantial capital investment and overcome the crisis.[16] By 1993, total output was down 14% compared to 1990 levels. Lada's declining sales during the 1990s, and toughening European Union emissions requirements, saw exports to Western Europe discontinued by the end of the decade. Lada had enjoyed particularly strong sales in Britain, peaking at more than 30,000 sales a year in the late 1980s, but had failed to remain competitive with other budget brands over the subsequent few years. In 1997, the production of cars in the Russian Federation increased by 13.2 percent in comparison with 1996 and achieved 981 thousands. AvtoVAZ and UAZ extended their output by 8.8 and 52 percent respectively, whereas KamAZ doubled it. The overall truck production in Russia increased by 7 percent, reaching 148 thousands in 1997[17] and 184 thousands in 2000.[18] The overall production of cars rose from about 800,000 in 1993 to more than 1.16 million in 2000,[19] or 965,000[20] (969,235 according to OICA[21]) excluding commercial vehicles. 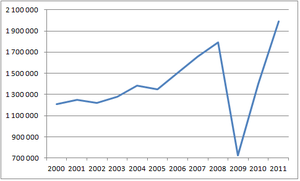 To boost the market share of locally produced vehicles, the Russian government implemented several protectionist measures and launched programs to attract foreign producers into the country. In late 2005, the Russian leadership enacted legislation to create special economic zones (SEZ) with the aim of encouraging investments by foreign automotive companies. The benefits of operating in the special economic zones include tax allowances, exemption from asset and land taxes and protection against changes in the tax regime. Some regions also provide extensive support for large investors (over $100 million.) These include Saint Petersburg/Leningrad Oblast (Toyota, GM, Nissan) and Kaluga Oblast (VW). Kaluga has been especially successful in attracting foreign companies, as has been Kaliningrad Oblast.[23]

Since the 2000s, foreign companies have been flocking to enter Russia, seeing it as a local production location and export powerhouse. Russia's labour, material and energy costs are only 1/6 compared to those in Western Europe.[24][25] 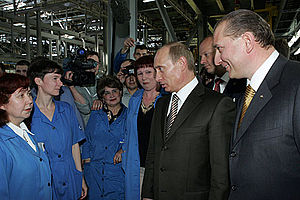 President Vladimir Putin meeting with AvtoVAZ employees in the company's factory in Tolyatti.

In late 2008, the Russian government introduced protectionist measures, worth $5 billion, to improve the situation in the industry. This included $2 billion of bailouts for troubled companies and $3 billion of credits for buyers of Russian cars.[27] Prime minister Vladimir Putin described the move as vital in order to save jobs.[28] The tariffs for imported foreign cars and trucks were increased to a minimum of 50% and go up to 100%. The tariffs are linked to the engine size of the vehicle. The increased duties led to protests in Russian cities, most notably in Vladivostok, where the importation of Japanese cars is an important sector of the city's economy.[29] To compensate for the losses of the Vladivostok businesses, Prime Minister Putin ordered the car manufacturing company Sollers to move one of its factories from Moscow to Vladivostok. The move was completed in 2009, and the factory now employs about 700 locals. It was planned to produce 13,200 cars in Vladivostok in 2010.[30]

The most efficient anti-crisis measure executed by the Russian government was the introduction of a car scrappage scheme in March 2010. Under the scheme, buyers of new cars could receive a subsidy of up to 600,000 rubles (20,000 USD).[31] Sales of Russia's largest carmaker Avtovaz doubled in the second quarter of 2010 as a result, and the company returned to profit.[32][33] 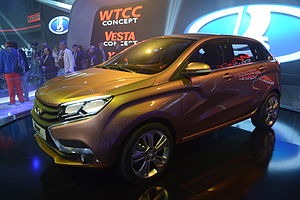 In 2010, Russia was the world's 15th largest producer of cars. The Russian automotive industry currently (as of 2010) accounts for about 2% of worldwide car production.[37] 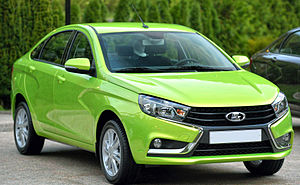 Lada Vesta went into production in 2015

The Russian automotive industry can be divided into four types of companies: local brand producers, foreign OEMs, joint ventures and Russian companies producing foreign brands.[38] In 2008, there were 5,445 companies manufacturing vehicles and related equipment in Russia. The volume of production and sales amounted to 1,513 billion rubles.[26] 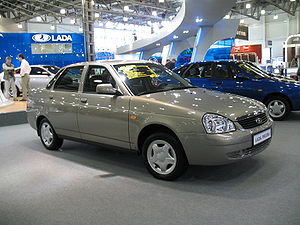 The Lada Priora, made by AvtoVAZ, was the most sold car in Russia in 2009

The four most popular cars in Russia in 2009 were all AvtoVAZ models. The economy car Lada Priora topped the list with 84,779 sold units. Lada Samara was second with 77,679 units sold in Russia, and the classic Lada 2105/2107 was third with sales of 57,499. Lada 2105 was expected to considerably increase sales following the car scrappage scheme launched in March 2010. The higher-end Lada Kalina was the fourth most sold car in Russia in 2009, selling 52,499 units that year.[39]

In the light commercial vehicle sector, the GAZelle van, manufactured by GAZ has been very popular, occupying a market share of 49% in 2009 and selling 42,400 units. The Avtoperevozchik magazine declared GAZelle as the most successful vehicle of 2009 in the Russian automotive market.[40] 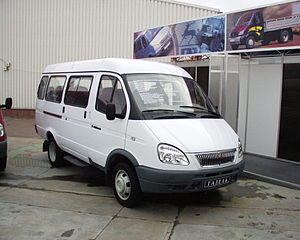 The GAZelle van, produced by GAZ, is popular on the light commercial vehicle market

The largest company of Russia's automotive industry is Avtovaz, located in the city of Tolyatti. It currently employs more than 130,000 people, and its Lada models dominate the Russian car market. Avtovaz models account for about 50% of Russia's total car production.[31]

Avtoframos, the third largest car manufacturer, produced 49,500 cars in 2009. Its plant is located in the south-east part of the city of Moscow. Avtoframos is a joint venture between France's Renault and the Moscow city administration, but is majority owned by Renault.[31] The company manufactures Renault Logan and Renault Sandero models. The ratio of Russian-made parts is 54%. The figure is expected to rise to 74% by 2012.[41]

The fourth and fifth largest carmakers in Russia are Volkswagen and Ford, respectively. In total, the five largest companies of the industry account for 80% of all cars made in Russia.[31] 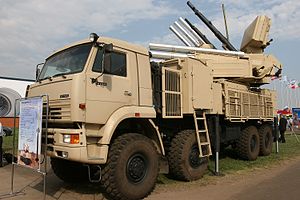 In the heavy vehicle sector, the largest company is the truckmaker KaMAZ. It is also one of the largest companies in the whole Russian automotive industry. In 2010, KaMAZ sold a total of 32,293 trucks; 28,254 in Russia and 4,039 in foreign countries.[42]

Another very important company is GAZ, which makes vans, trucks and busses, among other products. Its most popular product is the GAZelle van, which has a market share of 49% in the light commercial vehicle market. In 2009, the company launched an improved version, called GAZelle Business. In the bus sector, GAZ occupied a market share of 77%. It sold 6,169 buses in the small-class, 1,806 in the medium class and 1,156 in the large class.[40]

Russia's largest tractor maker, and one of the largest machine building companies in the world, is Concern Tractor Plants, located in Cheboksary. The company employs around 45,000 people. 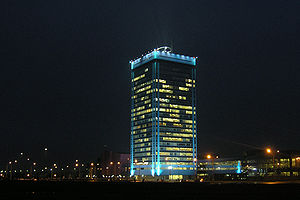 The main administration building of Avtovaz in Togliatti

Russia's automotive industry is a significant economic sector. It directly employs 600,000 people and supports around 2–3 million people in related industries.[35] It is politically a very important part of the country's economy: firstly, due to the large number of employed people and secondly, because many citizens depend on the social services provided by automotive companies. For example, the well-being of the giant AvtoVAZ factory in Tolyatti is massively important to the city or to the region of Samara Oblast.[43] Tolyatti is a typical monotown, a city whose economy is dependent on a single company. The factory employs around 100,000 people of the city's population of 700,000.[44]

In 2009, former President Dmitry Medvedev launched the Medvedev modernisation programme, which aims to diversify Russia's raw materials and energy-dominated economy, turning it into a modern high-tech economy based on innovation. Following this, Russia's automotive industry has been in the spotlight due to its great potential for modernisation.

Former Prime Minister and current President Vladimir Putin has taken a personal interest in the automotive industry. In a symbolic gesture of support, Putin made a highly publicized road trip on the new Amur Highway in August 2010, driving 2,165 kilometers in a Lada Kalina Sport.[45] Putin described the car as "excellent, even beyond my expectations", and praised it as "comfortable" and "almost noise-free."[46] The event was intended to show support for AvtoVAZ, which was recovering from the serious economic crisis.[47]

The Scientific Automobile & Motor Institute (NAMI). Founded in 1920 and located in Moscow, it created the first original Soviet car NAMI-I, which was produced in small numbers by the Spartak State Automobile Factory in Moscow, between 1927 and 1931,[48] and played a key role in the development of most Soviet vehicles. Today it is engaged in the creation of innovative environment-friendly cars, integrated engineering, standardisation and certification.[49]

The NAMI Proving Ground (NITsIAMT of NAMI). Founded in 1964, located in Dmitrov. It is the largest specialised research and testing organisation in Russia and Europe that conducts researches in car safety, aerodynamics, vibroacoustics, ergonomics, performs extensive on-road test programs of prototypes and mass-produced vehicles, car systems and vehicle parts in order to make them meet current and future regulatory requirements and improve their characteristics. The proving ground includes a variety of roads with different types of coatings, devices for crash tests, a wind tunnel, a vibroacoustic camera, an engine test bench, and a corrosion chamber.[50] 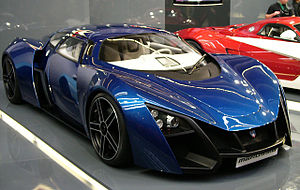 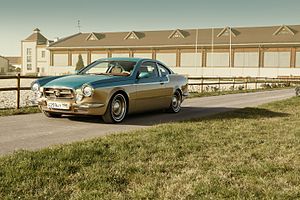 Another short-lived project was the Yo-mobile, a city car that could burn both gasoline and natural gas and was connected to a pair of electric motors. The car was introduced on 13 December 2010 in Moscow, a product of a joint venture between Yarovit, a producer of trucks based in St. Petersburg, Russia and the Onexim investment group, headed by Mikhail Prokhorov, who was the leader and financier of the project.[54][55] In 2014 the entire project was sold to the Russian government for a nominal sum, thus signalling the abandonment of the idea.[56] No actual vehicles other than a few concept cars were ever produced.