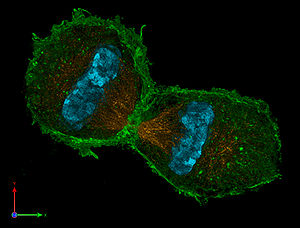 3D representation of a living cell during the process of mitosis, example of an autopoietic system.

The term "autopoiesis" (from Greek αὐτo- (auto-), meaning "self", and ποίησις (poiesis), meaning "creation, production") refers to a system capable of reproducing and maintaining itself. The term was introduced in 1972 by Chilean biologists Humberto Maturana and Francisco Varela to define the self-maintaining chemistry of living cells. Since then the concept has been also applied to the fields of systems theory and sociology.

The original definition can be found in Autopoiesis and Cognition: the Realization of the Living (1st edition 1973, 2nd 1980):

Page xvii: - It was in these circumstances...in which he analyzed Don Quixote's dilemma of whether to follow the path of arms (praxis, action) or the path of letters (poiesis, creation, production), I understood for the first time the power of the word 'poiesis' and invented the word that we needed: autopoiesis. This was a word without a history, a word that could directly mean what takes place in the dynamics of the autonomy proper to living systems.

Page 78: - An autopoietic machine is a machine organized (defined as a unity) as a network of processes of production (transformation and destruction) of components which: (i) through their interactions and transformations continuously regenerate and realize the network of processes (relations) that produced them; and (ii) constitute it (the machine) as a concrete unity in space in which they (the components) exist by specifying the topological domain of its realization as such a network.[1]

Page 89:- [...] the space defined by an autopoietic system is self-contained and cannot be described by using dimensions that define another space. When we refer to our interactions with a concrete autopoietic system, however, we project this system on the space of our manipulations and make a description of this projection.[2]

Autopoiesis was originally presented as a system description that was said to define and explain the nature of living systems. A canonical example of an autopoietic system is the biological cell. The eukaryotic cell, for example, is made of various biochemical components such as nucleic acids and proteins, and is organized into bounded structures such as the cell nucleus, various organelles, a cell membrane and cytoskeleton. These structures, based on an external flow of molecules and energy, produce the components which, in turn, continue to maintain the organized bounded structure that gives rise to these components (not unlike a wave propagating through a medium).

An autopoietic system is to be contrasted with an allopoietic system, such as a car factory, which uses raw materials (components) to generate a car (an organized structure) which is something other than itself (the factory). However, if the system is extended from the factory to include components in the factory's 'environment', such as supply chains, plant / equipment, workers, dealerships, customers, contracts, competitors, cars, spare parts, and so on, then as a total viable system it could be considered to be autopoietic.

Though others have often used the term as a synonym for self-organization, Maturana himself stated he would "[n]ever use the notion of self-organization [...]. Operationally it is impossible. That is, if the organization of a thing changes, the thing changes".[3] Moreover, an autopoietic system is autonomous and operationally closed, in the sense that there are sufficient processes within it to maintain the whole. Autopoietic systems are "structurally coupled" with their medium, embedded in a dynamic of changes that can be recalled as sensory-motor coupling. This continuous dynamic is considered as a rudimentary form of knowledge or cognition and can be observed throughout life-forms.

In the context of textual studies, Jerome McGann argues that texts are "autopoietic mechanisms operating as self-generating feedback systems that cannot be separated from those who manipulate and use them".[6] Citing Maturana and Varela, he defines an autopoietic system as "a closed topological space that 'continuously generates and specifies its own organization through its operation as a system of production of its own components, and does this in an endless turnover of components'", concluding that "Autopoietic systems are thus distinguished from allopoietic systems, which are Cartesian and which 'have as the product of their functioning something different from themselves'". Coding and markup appear allopoietic", McGann argues, but are generative parts of the system they serve to maintain, and thus language and print or electronic technology are autopoietic systems.[7]

In his discussion of Hegel, the philosopher Slavoj Zizek argues that "Hegel is - to use today's terms - the ultimate thinker of autopoiesis, of the process of the emergence of necessary features out of chaotic contingency, the thinker of contingency's gradual self-organisation, of the gradual rise of order out of chaos."[8]

"This generalized view of autopoiesis considers systems as self-producing not in terms of their physical components, but in terms of its organization, which can be measured in terms of information and complexity. In other words, we can describe autopoietic systems as those producing more of their own complexity than the one produced by their environment".[10]

An extensive discussion of the connection of autopoiesis to cognition is provided by Thompson.[11] The basic notion of autopoiesis as involving constructive interaction with the environment is extended to include cognition. Initially, Maturana defined cognition as behavior of an organism "with relevance to the maintenance of itself".[12] However, computer models that are self-maintaining but non-cognitive have been devised, so some additional restrictions are needed, and the suggestion is that the maintenance process, to be cognitive, involves readjustment of the internal workings of the system in some metabolic process. On this basis it is claimed that autopoiesis is a necessary but not a sufficient condition for cognition.[13] Thompson (p. 127) takes the view that this distinction may or may not be fruitful, but what matters is that living systems involve autopoiesis and (if it is necessary to add this point) cognition as well. It can be noted that this definition of 'cognition' is very restricted, and does not necessarily entail any awareness or consciousness by the living system.

A second question is whether autopoiesis can provide a bridge between these concepts. Thompson discusses this issue from the standpoint of enactivism. An autopoietic cell actively relates to its environment. Its sensory responses trigger motor behavior governed by autopoiesis, and this behavior (it is claimed) is a simplified version of a nervous system behavior. The further claim is that real-time interactions like this require attention, and an implication of attention is awareness.[15]

There are multiple criticisms in relation to the use of the term in both its original context, as an attempt to define and explain the living, and its various expanded usages, such as applying it to self-organizing systems in general or social systems in particular.[16] Critics have argued that the term fails to define or explain living systems and that, because of the extreme language of self-referentiality it uses without any external reference, it is really an attempt to give substantiation to Maturana's radical constructivist or solipsistic epistemology,[17] or what Danilo Zolo[18][19] has called instead a "desolate theology". An example is the assertion by Maturana and Varela that "We do not see what we do not see and what we do not see does not exist".[20] or that reality is an invention of observers. The autopoietic model, said Rod Swenson,[21] is "miraculously decoupled from the physical world by its progenitors [...] (and thus) grounded on a solipsistic foundation that flies in the face of both common sense and scientific knowledge".