Averroism is a school of Islamic philosophy that arose from the influence of the twelfth century Al-Andalus Muslim philosopher Averroës, who worked on reconciling Aristotelianism with Islam. Alternatively, the term Averroism may refer to the application of these ideas by thirteenth-century scholastic philosophers in the Latin Christian and Jewish intellectual traditions, such as Siger of Brabant, Boetius of Dacia and Maimonides. The term was used by the theologian Thomas Aquinas in a restricted sense to mean monopsychism and radical Aristotelianism.[1]

Latin translations of Averroes' work became widely available at the universities which were springing up in Western Europe in the thirteenth century. His work and commentaries on Aristotle were responsible for the development of scholasticism, a school of thought of Christianity which examined Christian doctrines through reasoning and intellectual analysis. Scholasticism marked the golden age of philosophy in medieval Europe.[2]

Averroes at the time of Dante Alighieri "was probably the most widely condemned thinker in the medieval Christian world... Averroism became virtually synonymous with atheism in the late Middle Ages and early Renaissance."[3] As an historiographical category it was first developed by Ernest Renan in Averroès et l'averroïsme (1852). Later historians applied the name to significant uses and expressions of elements of Averroes' doctrines and to the exegetical tradition of Aristotle by Jewish and Christian thinkers as it had come down through the Latin and Hebrew traditions. "Averroist" can therefore describe a range of positions, up to and including scholars interested in the historical phenomenon of Averroes' influence.[citation needed]

The main ideas of the earlier philosophical concept of Averroism — found in Averroës' commentaries to Aristotle — were[citation needed]:

The standpoints listed above resulted in two condemnations in 1270 and 1277 by bishop Etienne Tempier of the Roman Catholic Church. Tempier specified 219 different unacceptable Averroist theses. It has been pointed out[5] that Tempier's main accusations are almost identical to those brought by Al-Ghazali against philosophers in general in his Incoherence of the Philosophers, which Averroës had tried to demonstrate to be unjustified in The Incoherence of the Incoherence.

To resolve the problem, Siger of Brabant claimed that there existed a "double truth": a factual or "hard" truth that is reached through science and philosophy, and a "religious" truth that is reached through religion. This idea differed from that of Averroës : he taught that there is only one truth, but reached in two different ways, not two truths. He did however believe that Scripture sometimes uses metaphorical language, but that those without the philosophical training to appreciate the true meaning of the passages in question were obliged to believe the literal meaning. 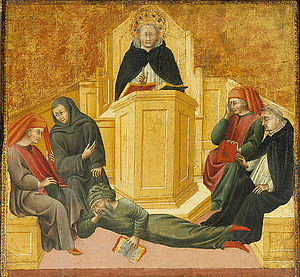 The later philosophical concept of Averroism —along with the thesis proclaimed by William of Ockham—, was the idea that the philosophical and religious worlds are separate entities. However, upon scrutinizing the 219 theses condemned by Tempier, it was obvious that not many of them originated in Averroës. Radical Aristotelianism and heterodox Aristotelianism were the terms commonly used for a while to refer to the actual philosophical movement started by Siger and Boëthius and differentiate it from Averroism; nowadays most scholars just call it Averroism as well.

Thomas Aquinas specifically attacked the doctrine of monopsychism and panpsychism in his book De unitate intellectus contra Averroistas. In this context, the term Averroism is used correctly.

Although condemned in 1277, many Averroistic theses survived to the sixteenth century and can be found in the philosophies of Giordano Bruno, Pico della Mirandola, and Cesare Cremonini. These theses talk about the superiority of philosophers to the common people and the relation between the intellect and human dignity.

There was no formal school or movement of Rushdiyya ("Averroism") in the Islamic tradition. However, according to Anke von Kuelgegen's study of modern Arab Nationalist discourse,[6] Averroes has been the central and symbolic figure in arguments over the decline and revitalization of Islamic society. This discourse is operating within or descending from the framework developed by the nineteenth-century French thinker Ernest Renan, whose depiction of Averroes, Averroism, Islam and Medieval Renaissance reintroduced the topic of the Islamic tradition's contributions to the Western world.[7]

Nevertheless, there have been periodic calls to resurrect Averroism per se. The most notable of these calls was from the Moroccan philosopher Mohammed Abed al-Jabri.[8]

Baruch Spinoza was also notably influenced by Averroism, his panentheism flowing from Averroistic monopsychism, as was Spinoza's belief in the higher state of the philosophers and tendencies toward secularism. Arguably, Spinozan Averroism went on to influence Jewish Conservatism and Reconstructionism[citation needed].