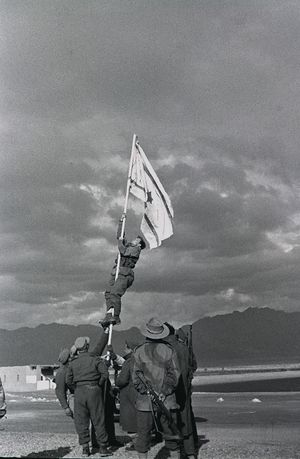 Adan (seen on the pole) raising the Ink Flag

Adan was born in Kfar Gileadi, British Mandate Palestine, in 1926 as Avraham Eidelson.[2] He joined the Palmach in 1943.[2] During the 1948 Arab–Israeli War he was a company commander in the 8th Battalion of the Negev Brigade, and participated in Operation Uvda, in which the brigade captured the Jordanian outpost of Umm Rashrash, now known as Eilat, at the southernmost tip of the newly created country.[3] It was he who raised the Ink Flag claiming the territory for Israel, as depicted in the famous photograph of the event. The iconic image has been compared to Raising the Flag on Iwo Jima.[4]

Major General Adan was defending the northern portion of the Israeli defense along the Suez Canal when the October 1973 Yom Kippur War broke out.[4] As the commander of the 162nd Division, his division suffered severe losses from 6 to 8 October, in repeated attempts to stop the Egyptian attack and push it back across the canal. Later on during the war he led his unit across the canal into Egyptian territory just north of the Great Bitter Lake, during Operation Stouthearted Men. He then maneuvered his unit southward to Suez City, where his unit surrounded the Egyptian Third Army.

From 1974 to 1977 he served as the Armed Forces Attaché at the Israeli embassy in Washington, DC.[2]

Adan was among the founders of Kibbutzim Nirim and Gevulot.[4]