From Infogalactic: the planetary knowledge core
Jump to: navigation, search
This article is about formal recognitions. For other uses, see Award (disambiguation).
See also: Prize and Title 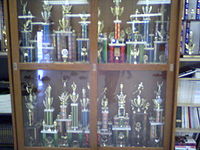 Some of the trophies earned by the NJROTC unit of Port Charlotte High School.

An award is something given to a person, a group of people, or an organization to recognize their excellence in a certain field; a certificate of excellence. Awards are often signified by trophies, titles, certificates, commemorative plaques, medals, badges, pins, or ribbons. An award may carry a monetary prize given to the recipient; for example, the Nobel Prize for contributions to society or the Pulitzer Prize for literary achievements. An award may also simply be a public acknowledgment of excellence, without any tangible token or prize.

Awards can be given by any person or institution, although the prestige of an award usually depends on the status of the awarder. Usually, awards are given by an organization of some sort, or by the office of an official within an organization or government. For instance, a special presidential citation (as given by the President of the United States) is a public announcement giving an official place of honor (e.g., President Ronald Reagan gave a special presidential citation in 1984 to the Disney Channel for its excellent children's television programming.)

However, there are exceptions like some quality labels, for which it is neither person nor organizations that are rewarded, but products. This is the case for the World Quality Selections organized by Monde Selection. These international awards are assigned to beverages, foods, cosmetics and diet products, which stand out for their quality.

People who have won certain prestigious awards, such as the Nobel Prize, a championship title in a sport, or an Academy Award (Oscar), can have the award become their identity, thereafter being known primarily for winning the award, rather than for any other achievement or occupation. To distinctly be categorized as an 'Award', rather than some other type of ceremonial or arbitrary recognition, there should be a clear process of nominations, award criteria and appropriate judging process. Generally, recognition by a set of peers, acknowledging quality of work, rather than a 'popularity contest' is considered to be an authentic award. Some prestigious and authentic awards include:

Mock awards, which typically recognize failures or atypical achievements, are also popular.[7] They are usually given by people and organizations of lower or average prestige, such as comical organizations and individual writers. Popular mock awards include:

One common type of award in the United States is the Employee of the Month award, where typically the recipients' names are listed in a prominent place in the business for that month. A common mock award is the wooden spoon, given to an individual or team which has come last in a competition.

Some awards are given only after a fee is paid by the recipient, such as the German Design Award.

An honorable mention is an award or recognition given to something that does not make it to a higher standing but is worth mentioning in an honorable way.