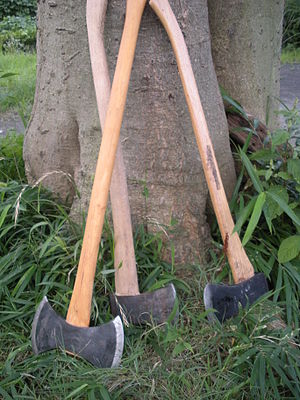 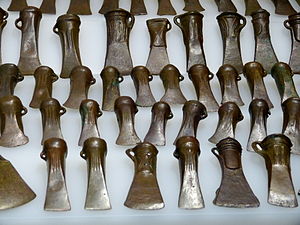 A hoard of bronze socketed axes from the Bronze Age found in modern Germany. This was the top tool of the period, and also seems to have been used as a store of value

An axe (in American English also spelled ax) is an implement that has been used for millennia to shape, split and cut wood; to harvest timber; as a weapon; and as a ceremonial or heraldic symbol. The axe has many forms and specialised uses but generally consists of an axe head with a handle, or helve.

Before the modern axe, the stone-age hand axe was used from 1.5 million years BP without a handle. It was later fastened to a wooden handle. The earliest examples of handled axes have heads of stone with some form of wooden handle attached (hafted) in a method to suit the available materials and use. Axes made of copper, bronze, iron, and steel appeared as these technologies developed. Axes are usually composed of a head and a handle.

The axe is an example of a simple machine, as it is a type of wedge, or dual inclined plane. This reduces the effort needed by the wood chopper. It splits the wood into two parts by the pressure concentration at the blade. The handle of the axe also acts as a lever allowing the user to increase the force at the cutting edge—not using the full length of the handle is known as choking the axe. For fine chopping using a side axe this sometimes is a positive effect, but for felling with a double bitted axe it reduces efficiency.

Generally, cutting axes have a shallow wedge angle, whereas splitting axes have a deeper angle. Most axes are double bevelled, i.e. symmetrical about the axis of the blade, but some specialist broadaxes have a single bevel blade, and usually an offset handle that allows them to be used for finishing work without putting the user's knuckles at risk of injury. Less common today, they were once an integral part of a joiner and carpenter's tool kit, not just a tool for use in forestry. A tool of similar origin is the billhook. However, in France and Holland the billhook often replaced the axe as a joiner's bench tool.[citation needed]

Most modern axes have steel heads and wooden handles, typically hickory in the US and ash in Europe, although plastic or fibreglass handles are also common. Modern axes are specialised by use, size, and form. Hafted axes with short handles designed for use with one hand are often called hand axes but the term hand axe refers to axes without handles as well. Hatchets tend to be small hafted axes often with a hammer on the back side (the poll). As easy-to-make weapons, axes have frequently been used in combat.

History of an axe 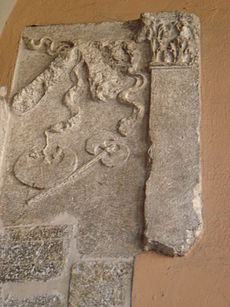 Roman axe in an ancient Roman relief in Brescia, Italy

Initially axes were tools of stone called hand axes, used without handles (hafts), and had knapped (chipped) cutting edges of flint or other stone. Axes made with ground cutting edges are known since the Neolithic period ending 4,000 to 2,000 BC. The first true hafted axes are known from the Mesolithic period (ca. 6000 BC). Few wooden hafts have been found from this period, but it seems that the axe was normally hafted by wedging. Birch-tar and raw-hide lashings were used to fix the blade.

Sometimes a short section of deer antler (an "antler sleeve") was used, which prevented the splitting of the haft and softened the impact on the stone blade itself, helping absorb the impact of each axe blow and lessening the chances of breaking the handle. The antler was hollowed out at one end to create a socket for the axehead. The antler sheath was then either perforated and a handle inserted into it or set in a hole made in the handle instead.

The distribution of stone axes is an important indication of prehistoric trade. Thin sectioning is used to determine the provenance of the stone blades. In Europe, Neolithic 'axe factories', where thousands of ground stone axes were roughed out are known from many places, such as:

Stone axes are still produced and in use today in parts of Irian Jaya, New Guinea. The Mount Hagen area was an important production centre.

From the late Neolithic/Chalcolithic onwards, axes were made of copper or copper mixed with arsenic. These axes were flat and hafted much like their stone predecessors. Axes continued to be made in this manner with the introduction of Bronze metallurgy. Eventually the hafting method changed and the flat axe developed into the 'flanged axe,' then palstaves, and later winged and socketed axes.

The Proto-Indo-European word for "axe" may have been pelek'u- (Greek pelekus πέλεκυς, Sanskrit parashu, see also Parashurama), but the word was probably a loan, or a Neolithic wanderwort, ultimately related to Sumerian balag, Akkadian pilaku- .[citation needed] 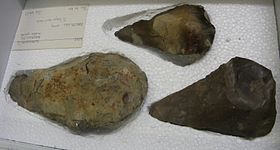 Hand axes from Swanscombe at the British Museum that belongs to Swanscombe Man who lived 200,000–300,000 years ago 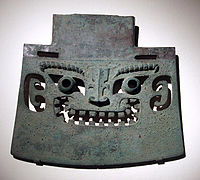 A bronze axe from the Chinese Shang Dynasty, 12th to 11th centuries BC

At least since the late Neolithic, elaborate axes (battle-axes, T-axes, etc.) had a religious significance and probably indicated the exalted status of their owner. Certain types almost never show traces of wear; deposits of unshafted axe blades from the middle Neolithic (such as at the Somerset Levels in Britain) may have been gifts to the deities. 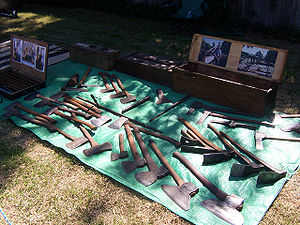 In Minoan Crete, the double axe (labrys) had a special significance, used by priestesses in religious ceremonies. And the symbol refers to deification ceremonies; part of the leaping over the bull symbol also found at Crete; whereby aspirant becomes able to speak as a god to create any reality; the symbol being really a sky map.[citation needed]

In 1998 a labrys, complete with an elaborately embellished haft, was found at Cham-Eslen, Canton of Zug, Switzerland. The haft was 120 cm long and wrapped in ornamented birch-bark. The axe blade is 17.4 cm long and made of antigorite, mined in the Gotthard-area. The haft goes through a biconical drilled hole and is fastened by wedges of antler and by birch-tar. It belongs to the early Cortaillod culture.

In folklore, stone axes were sometimes believed to be thunderbolts and were used to guard buildings against lightning, as it was believed (mythically) that lightning never struck the same place twice. This has caused some skewing of axe distributions.

Steel axes were important in superstition as well. A thrown axe could keep off a hailstorm, sometimes an axe was placed in the crops, with the cutting edge to the skies to protect the harvest against bad weather. An upright axe buried under the sill of a house would keep off witches, while an axe under the bed would assure male offspring.

Basques, Australians and New Zealanders have developed variants of rural sports that perpetuate the traditions of log cutting with axe. The Basque variants, splitting horizontally or vertically disposed logs, are generically called aizkolaritza (from aizkora: axe).

In Yorùbá mythology, the oshe (double-headed axe) symbolises Shango, Orisha (god) of thunder and lightning. It is said to represent swift and balanced justice. Shango altars often contain a carved figure of a woman holding a gift to the god with a double-bladed axe sticking up from her head.

The Arkalochori Axe is a bronze, Minoan, axe from the second millennium BC thought to be used for religious purposes. Inscriptions on this axe have been compared with other ancient writing systems.

Parts of the axe

A diagram showing the main points on an axe

The axe has two primary components: the axe head, and the haft.

The axe head is typically bounded by the bit (or blade) at one end, and the poll (or butt) at the other, though some designs feature two bits opposite each other. The top corner of the bit where the cutting edge begins is called the toe, and the bottom corner is known as the heel. Either side of the head is called the cheek, which is sometimes supplemented by lugs where the head meets the haft, and the hole where the haft is mounted is called the eye. The part of the bit that descends below the rest of the axe-head is called the beard, and a bearded axe is an antiquated axe head with an exaggerated beard that can sometimes extend the cutting edge twice the height of the rest of the head.

The axe haft is sometimes called the handle. Traditionally, it was made of a resilient hardwood like hickory or ash, but modern axes often have hafts made of durable synthetic materials. Antique axes and their modern reproductions, like the tomahawk, often had a simple, straight haft with a circular cross-section that wedged onto the axe-head without the aid of wedges or pins. Modern hafts are curved for better grip and to aid in the swinging motion, and are mounted securely to the head. The shoulder is where the head mounts onto the haft, and this is either a long oval or rectangular cross-section of the haft that's secured to the axe head with small metal or wooden wedges. The belly of the haft is the longest part, where it bows in gently, and the throat is where it curves sharply down to the short grip, just before the end of the haft, which is known as the knob. 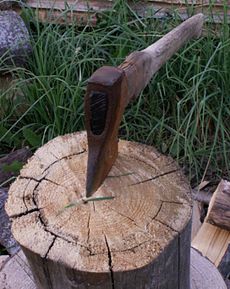 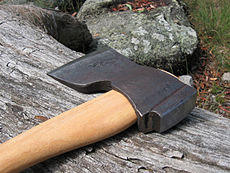 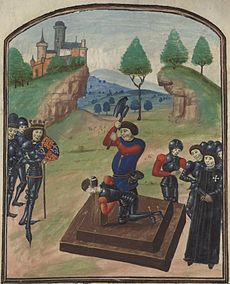 Hammer axes (or axe-hammers) typically feature an extended poll, opposite the blade, shaped and sometimes hardened for use as a hammer. The name axe-hammer is often applied to a characteristic shape of perforated stone axe used in the Neolithic and Bronze Ages. Iron axe-hammers are found in Roman military contexts, e.g. Cramond, Edinburgh, and South Shields, Tyne and Wear.[citation needed]

Today they are used in many different fields of work, completing all jobs from splitting wood to removing engines from vans. Tungsten is often added for weight as an upgrade, as well as six foot handles for the heavier jobs that require added force and "massive blows" such as cutting automobile frames, slicing brake rotors, rough body work, home construction, home de-construction, etc.[citation needed]