Ay-O (靉嘔, Aiō?, Takao Iijima, born May 19, 1931) is a Japanese artist who has been associated with Fluxus since its international beginnings in the 1960s.

Probably, the best reference to understand the early years of Ay-O is the autobiographical retrospective book in the references "Ay-O, Over the Rainbow, Ay-O Restrospective 1950-2006." In a nutshell: Ay-O started his career in the Demokrato Artist Association (デモクラート美術家協会), created by Ei-Q. This association promoted artistic freedom and independence in making art. The influence of these values with Ay-O can be seen in a series of early paintings over which he painted a large X because he thought they were not original enough. Another independent movement was close to Democrato in Japan: Sōzō Biiku (創造美育) by the collector Sadajirō Kubo (久保貞次郞） promoting nurturing freedom when teaching art. Both movements started Fukui Prefecture in Japan and explain the special bound Ay-O developed with the Fukui Prefecture. Sōzō Biiku's approach is a challenge of the traditional Japanese Master-Student relationship. As such, like naive art, the movement promotes ways independent to the culturally established ones. Kubo also created the "Small Collector Society" (小コレクターの会) to spread art collection in society.

Ay-O was introduced to George Maciunas by Yoko Ono in 1961 and formally joined Maciunas in Fluxus in 1963. Ay-O was known for his Finger Boxes and for his performance events when he was active in Fluxus. He worked closely with fellow Fluxus artists Maciunas, Emmett Williams, Dick Higgins and Nam June Paik. He lived in the same fluxus style coop as Nam June Paik in Soho at the time.

Ay-O established a reputation in the avant-gardes of Japan, Europe and the United States. In Japan, he is known as the "Rainbow Man" for his use of colorful, rainbow-striped motifs in his artwork. In its purest form, some paintings are simple gradations of the rainbow, with up to 192 gradations. 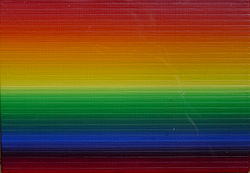 Ay-O represented Japan at the Venice Biennale in 1966 and at the São Paulo Biennale in 1971. He also built the famed "Tactile Rainbow" at the Osaka World's Fair in 1970. In 1971, true to his Demokato debut, he adapted 10 American Naïve paintings and created a rainbow version that he called Nashville Skyline. Ay-O's attachement to Douanier Rousseau's work is another proof of his interest for naïve art. In 1987 he did a series of Rainbow Happenings, with Rainbow Happening #17 being a 300m Rainbow Eiffel Tower project in Paris.

One of his projects in English was a Collective Portrait of George Maciuanas, that he co-edited with Emmett Williams and Ann Noel. In the recent decade Ay-O has exhibited regularly at the Emily Harvey Gallery in (1996, 2001) and Gallery Itsutsuji (1996,2005,2007,2012) and Gallery Goto (1999,2004) in Japan. In Japan Ay-O is part of the collection of the National Museum of Modern Art in Tokyo and Kyoto (see 2005 Tokyo exhibition in the links). In 2001 Ay-O had a room in the special exhibit "La fluxus Constellation" in the Museum of Contemporary Art in Genoa. He was also represented in various other Fluxus exhibitions around the world as "Centraal Fluxus Festival" Centraal Museum, Utrecht (2003), "Fluxus & Non Fluxus Fluxus" Randers kunstmuseum (2006). Ay-O was one of the "Twelve Japanese Artists from the Venice Biennale 1952-2001," in Art Tower Mito ATM, Mito. At the Mori Art Museum, Tokyo, Ay-O was part of two exhibitions: "Tokyo-Berlin / Berlin-Tokyo" in 2005 and "All about laughter" in 2007. Finally in 2012 the MUSEUM OF CONTEMPORARY ART TOKYO (MOT) showed a large retrospective exhibition: "Over the Rainbow once more."[1][2] [3] [4] This was followed by the retrospective being shown at the Hiroshima City Museum of Contemporary Art through to 14.1.2013.[5][6][7][8]. The 300m Rainbow from Happening #17 was part of the show [9]. Hiroshima's MOCA exhibit was the occasion of one more happening performed by Ay-O and his team : a Fluxus revival performance, succession of 30 shorts representing each a different Fluxus artists Video on YouTube. This was Ay-O's way to celebrate the 50's birthday of Fluxus, and a Japanese echo the Wiesbaden events [10]. In 2012 the MOMA produced the an exhibit titled : Tokyo 1955-1970 Avant Garde where Ay-O's work in that period are presented.[11]

Ay-O did his most complete retrospective exhibition in the Fukui Art Museum in 2006. This exhibition was the occasion for the artist to write a bilingual book "Over the Rainbow, Ay-O Restrospective 1950-2006," in which he provides an overview of his work. In 2012 similar retrospective augmented by recent works "Ay-O: Over the Rainbow Once More" is shown in various locations in Japan - the inaugural exhibit was in the Tokyo MOT. 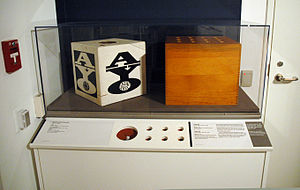 Ay-O's Tactile Box and Finger Box on display in the exhibition Art, Anti-Art, Non-Art: Experimentations in the Public Sphere in Postwar Japan, 1950–1970 at the Getty Center in Los Angeles. In front of the case is a simulator of the artworks within, where visitors can insert their hands (for the Tactile Box) or fingers (for the Finger Box).

The Finger Boxes are works of art by Ay-O that are the most tactile works of art in the Fluxus project. Ay-O first produced them in 1964. There are rumors that they were invented before WWII, however this is unconfirmed. It is said that all of the original Finger Boxes were destroyed during the fighting. Ay-O is said to have learned of this and claimed the invention for himself.[1]The artworks comprise largely identical hollow cubical wooden boxes with finger-sized holes in one face. As tactile works of art, it is necessary to touch them to perceive them, by placing one's finger into the hole to feel the material that is hidden within the box. The hidden contents of the boxes comprise such various things as beads, bristle brushes, hair, cotton balls, nails, and sponges.[2]

The artist's intent, by including things such as nails, which can potentially prick the finger, in the possible contents of the box is to ensure that the user touches the box with an "enquiring, learning gesture". The finger boxes are also intended to be touched by multiple people at a time, promoting a shared, social, experience of perceiving the work.[3]

Several versions of the Finger Box exist, including one set of boxes in a briefcase (entitled Finger Box (valise edition)) which is in the Gilbert and Lila Silverman Fluxus Collection in Detroit, and a version (included in Fluxus I) that uses sealed envelopes that have been slit open instead of boxes.[4]

In the 2012 Japan retrospective, "Over the Rainbow once More" - a larger work is presented around the finger boxes—it is a cubic room in which the viewer/toucher enters. The wall of this room is paved with square rainbow motifs - where concentric squares with the colors of the rainbow are painted around a hole in the wall. Behind each hole a finger box as been appended on the other side.