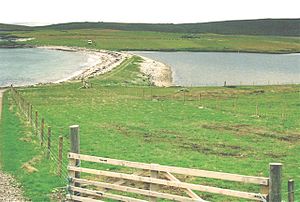 Ayre is the name used for shingle beaches in Orkney and Shetland.[1][2] The word is derived from the Old Norse "eyrr" meaning a shingle beach or gravelly place [3] and may be applied to ordinary beaches, to cliff-foot beaches (such as the Lang Ayre in Northmavine, Shetland http://www.landforms.eu/shetland/lang%20ayre.htm ) to spits, bars and tombolos, but only if formed of shingle. More than 130 such shingle beaches are named on Ordnance Survey maps of Shetland, but far fewer in Orkney, where most beaches are formed of sand. The word in its Old Norse form is common in Iceland and it also occurs in a few place names in the north and west of the Scottish mainland which had a strong Norse influence, such as Eriboll ("a homestead on a shingle beach"). Churchill Barrier number 4 in Orkney used a shingle spit, the Ayre of Cara on South Ronaldsay, as its southern landfall. The ayre is still named on maps, despite its having all but vanished under the causeway and the sand dunes that have accumulated on its eastern side.

The term "ayre" is sometimes wrongly applied to sand tombolos (e.g. St. Ninian's tombolo in Shetland) and to the lakes and lagoons impounded by bay-head bars, which are more properly called oyces [4] in Orkney and houbs in Shetland