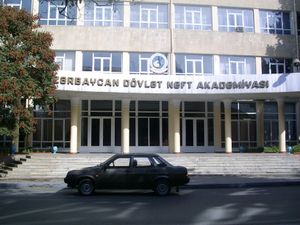 One of the buildings of the academy

The rise of what became ASUOI is tied to the rise of the petroleum industry in the Baku region. By 1887 the preparatory technical school that would become Baku Polytechnicum was established in Baku. By 1910 it had integrated a curriculum related to the growing oil industry. However, the ratio of Azeris to non-Azeris was so skewed that, of the 494 students studying at the school in 1916, only 20 were Azeri. On November 14, 1920, after the invasion of the Red Army and the establishment of the fledgling Azerbaijan SSR, the new government decreed that Baku Polytechnicum would close and be replaced by Baku Polytechnical Institute, a more traditional polytechnic institute and the beginnings of the current incarnation. The new school focused on training engineers in a broad range of industries, from agriculture to oil. By 1923 the school graduated its first three students; by 1927 it had risen to 289 graduates.

The new school went through many name changes over the years as its emphasis changed to meet the needs of Azerbaijan. In 1923 the school changed its name to Azerbaijan Polytechnical Institute. In 1929 the agriculture department was spun off into a separate Agriculture Institute and the university changed its name to the Azerbaijan Oil Institute (AOI) in 1930. However, the expanding need for engineers in areas outside oil resulted in expansion in the school's curriculum. The school changed names again in 1934, this time to the Azerbaijan Industrial Institute (Az.I.I.).

World War II taxed the Soviet Union and schools like Az.I.I. struggled to stay open. At the end of the war, there was great demand for oil engineers in the Soviet Union and the school trained them in great numbers. In 1952, the government founded a separate Azerbaijan Polytechnical Institute and moved much of the non-petrochemical curricula to the new school so that Az.I.I. could focus on the oil industry. On February 12, 1959 the school was renamed the Azerbaijan Oil and Chemistry Institute (AzOCI). In the early 1960s an evening program was developed. This program developed into its own, separate public university in 1992, reusing the name Azerbaijan Industrial Institute and becoming Sumgait State University. On March 21, 1992, after the independence of Azerbaijan from the Soviet Union, the university changed its name to the current ASUOI.

In 1993 the school changed its curricula into a more Western model, with its first bachelor's and master's degree candidates graduating in 1999.

On April 30, 2009, a shooting spree occurred at the academy in which thirteen people were killed.[2] The perpetrator was Farda Gadirov, a Georgian citizen of Azerbaijani descent.

The campus is on Azadlıq Prospekti (Liberty Avenue) in Baku.

The university is run by a management body of prorectors, supervised by the Scientific Council and the rector Mustafa Babanli.

Since the breakup of the Soviet Union, ASOA has worked with a dozen Western universities to Westernize and modernize its programs, in particular with Georgia State University to develop a modern Masters of Business Administration program.[3]

The Academy has its own sports complex with swimming pool, tennis courts and all-weather football pitch. The "Neftçi" (~"Oilers") run teams in 12 sports including football, swimming, handball, basketball, athletics, judo, boxing and wrestling.

The academy is a member of the Caucasus University Association.[4]