The Azerbaijan SSR was established on 28 April 1920 after the surrender of the government of the Azerbaijan Democratic Republic to local Bolsheviks led by Mirza Davud and Nariman Narimanov and the invasion of the Bolshevik 11th Red Army.

Borders of Azerbaijan and Armenia, like elsewhere in the USSR, were redrawn several times, yet neither side was completely satisfied with the results.

On 12 March 1922 the leaders of Azerbaijan, Armenian, and Georgian Soviet Socialist Republics established a union known as the Transcaucasian SFSR. This was the first attempt at a union of Soviet republics, preceding the USSR. The Union Council of TSFSR consisted of the representatives of the three republics – Nariman Narimanov (Azerbaijan), Polikarp Mdivani (Georgia), and Aleksandr Fyodorovich Miasnikyan (Armenia). The First Secretary of the Transcaucasian Communist Party was Sergo Ordzhonikidze.

In December 1922 TSFSR agreed to join the union with Russia, Ukraine, and Belarus, thus creating the Union of Soviet Socialist Republics which would last until 1991. The TSFSR, however, did not last long. In December 1936, the Transcaucasian Union was finally dismantled when the leaders in the Union Council found themselves unable to come to agreement over several issues. Azerbaijan, Armenia, and Georgia then became union Republics of the Soviet Union directly.

In the spring of 1921, a general change-over from revkoms and kombeds to Soviets took place. In order to help the Azerbaijani oil industry the Supreme Council of the National Economy decided in the same year to provide it with everything necessary out of turn. The new oilfields, like Ilyich Bay, Qara-Chukhur, Lok-Batan and Kala have been discovered. In 1929 a great kolkhoz movement had developed and Azerbaijan became the second Soviet tea producer after the Georgian SSR for the first time. On 31 March 1931 the oil industry of the Azerbaijan SSR, which supplied over 60% of the total Soviet oil production at the time, was awarded the Order of Lenin. The republic gained the second Order on 15 March 1935 during the observation of its 15th anniversary. At the end of the second five-year plan (1933–1937) Azerbaijan appeared at 3rd place in the Soviet Union by its capital investment size. In 1938, the Azerbaijani alphabet was changed from Latin to Cyrillic alphabet.

During the period 17 September 1939 to 21 June 1941, the Soviet Union was Nazi Germany's most important ally. In April, 1940, intelligence flights by the British and French Air Forces passed over the Absheron Peninsula. Great Britain and France seriously considered the possibility of bombing the Republic's oil fields.

This changed when Germany invaded the Soviet Union on 22 June 1941. In the first year of the Soviet-German War, Azerbaijan produced 25,4 million tons of oil – a record for the entire history of its oil industry.[citation needed] By the end of 1941, thousands of Azerbaijanis had joined the People's Volunteer Corps. Mobilization affected all spheres of life, particularly the oil industries. A week after fighting began, the oil workers themselves took the initiative to extend their work to 12-hour shifts, with no days off, no holidays, and no vacations until the end of the war. Meanwhile, in September 1942 Hitler's generals presented him with a large decorated cake which depicted the Caspian Sea and Baku. Baku then became the primary strategic goal of Hitler's 1942 Fall Blau offensive. This offensive was unsuccessful, however. The German army reached the mountains of the Caucasus, but was at the same time decisively defeated at the Battle of Stalingrad and so forced to retreat from the area, abandoning all hopes for a Reichskommissariat Kaukasus. In 1942 Azerbaijan also became the second largest tea producer of the Soviet Army. By the decree of the Supreme Soviet of the USSR in February 1942, the commitment of more than 500 workers and employees of the oil industry of Azerbaijan was awarded orders and medals. Of the estimated 600,000 Azerbaijanis who were recruited into the Soviet Army during the war, 290,000 died.

An event that greatly impacted Azerbaijanis on both sides of the border was the Soviet occupation of Iranian Azerbaijan in the summer of 1941. The Soviet military presence south of the Aras River led to a revival of Pan-Azerbaijani nationalism. During the Soviet occupation a revival of the Azerbaijani literary language, which had largely been supplanted by Persian, was promoted with the help of writers, journalists, and teachers from Soviet Azerbaijan. In November 1945, with Soviet backing, an autonomous "Azerbaijan People's Government" was set up at Tabriz under Jafar Pishevari, the leader of the Azerbaijani Democratic Party. Secular cultural institutions and education in Azerbaijani blossomed throughout Iranian Azerbaijan, and speculation grew rife about a possible unification of the two Azerbaijan's, under Soviet control. As it turned out, the issue of Iranian Azerbaijan became one of the first conflicts of the Cold War, and under pressure by the Western powers, the Soviet army was withdrawn. The Iranian government regained control over Iranian Azerbaijan by the end of 1946 and Democratic Party leaders took refuge in Soviet Azerbaijan. Jafar Pishevari, who was never fully trusted by Stalin, soon died under mysterious circumstances. 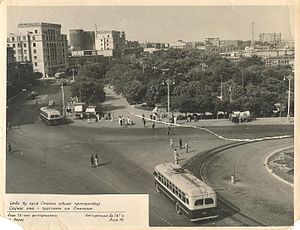 Apart from the Oil Rocks, Azerbaijan's first offshore oil field was opened in the early 1950s. Policies of de-Stalinization and improvement after the 1950s led to better education and welfare conditions for most of Azerbaijan. This also coincided with the period of rapid urbanization and industrialization. During this period of change, a new anti-Islamic drive and return to a policy of Russification, under the policy of sblizheniye (rapprochement), was instituted in order to merge all the peoples of the USSR into a new monolithic Soviet nation.

In the 1960s, signs of a structural crisis in the Soviet system began to emerge. Azerbaijan's crucial oil industry lost its relative importance in the Soviet economy, partly because of a shift of oil production to other regions of the Soviet Union and partly because of the depletion of known oil resources accessible from land, while offshore production was not deemed cost effective. As a result, Azerbaijan had the lowest rate of growth in productivity and economic output among the Soviet republics, with the exception of Tajikistan. Ethnic tensions, particularly between Armenians and Azerbaijanis began to grow, but violence was suppressed. In an attempt to end the growing structural crisis, the government in Moscow appointed Heidar Aliyev as the first secretary of the Communist Party of Azerbaijan in 1969. Aliyev temporarily improved economic conditions and promoted alternative industries to the declining oil industry, such as cotton. He also consolidated the republic's ruling elite, which now consisted almost entirely of ethnic Azerbaijanis, thus reverting the previous trends of sblizheniye. In 1982 Aliyev was made a member of the Communist Party's Politburo in Moscow. In 1987, when Perestroika was implemented, he was forced to retire by Soviet leader Mikhail Gorbachev, whose reform policies he opposed.

The late 1980s, during the Gorbachev era, were characterized by increasing unrest in the Caucasus, initially over the Nagorno-Karabakh issue. The ethnic strife revealed the shortcomings of the Communist Party as a champion of national interests and, in the spirit of glasnost, independent publications and political organizations began to emerge. Of these organizations, by far the most prominent was the Popular Front of Azerbaijan (PFA), which by the fall of 1989 seemed poised to take power from the Communist Party. The PFA soon experienced a split between a conservative-Islamic wing and a moderate wing. The split was followed by an outbreak of anti-Armenian violence in Baku and intervention by Soviet troops.

Unrest culminated in a pogrom of Armenians in Baku, followed by an unsuccessful attempt by the Red Army to restore order, in which the army killed at least 132 demonstrators in Baku on 20 January 1990. Azerbaijan adopted its declaration of independence on 30 August 1991, before the dissolution of the Soviet Union on 25 December 1991; however Azerbaijan became part of the Commonwealth of Independent States later, in September 1993. By the end of 1991 fighting in Nagorno-Karabakh had escalated into a full-scale war, which culminated into a tense 1994 cease-fire that has persisted into the 21st century. Although a cease-fire was achieved, the negotiations by both sides have so far resulted in a stalemate, as Armenian troops retained their positions in Karabakh as well as corridors taken from Azerbaijan that connect the region to Armenia.

The state of the Azerbaijan SSR (renamed the "Republic of Azerbaijan") formally ceased to exist on 12 November 1995, with the adoption of the new constitution by popular referendum.

Chairmen of the Central Executive Committee

Chairmen and the Presidium of the Supreme Soviet

Under the military structure of the former Soviet Union, Azerbaijan shortly before gaining independence was host to over 60,000 Soviet military personnel deployed throughout the country in units of the Ground Forces, Air Forces, Air Defense Forces, and Navy. The primary combat formation of Ground Forces in Azerbaijan was the 4th Army, which housed its headquarters and various support units in Baku. In addition to the independent surface-to-air missile (SAM), artillery, and SCUD brigades, the principal combat elements of the Fourth Army were the 23rd (Ganja), 295th (Lenkaran), 60th (Baku) and 75th (Nakhchivan) motorized rifle divisions (MRD), and the Ganja Helicopter Assault Regiment (Mi-24 Hinds and Mi-8 Hips). The only ground forces training establishment in Azerbaijan was the Combined Arms Command School at Baku.

Azerbaijan has the largest agricultural basin in the region. About 54.9 percent of Azerbaijan is agricultural lands. At the beginning of 2007 there were 4,755,100 hectares of utilized agricultural area. In the same year the total wood resources counted 136 million m³. Azerbaijan's agricultural scientific research institutes are focused on meadows and pastures, horticulture and subtropical crops, green vegetables, viticulture and wine-making, cotton growing and medicinal plants. In some lands it is profitable to grow grain, potatoes, sugar beets, cotton and tobacco. Livestock, dairy products, and wine and spirits are also important farm products.[1] The Caspian fishing industry is concentrated on the dwindling stocks of sturgeon and beluga. In 2002 the Azerbaijani merchant marine had 54 ships.