The Azerbaijan Navy (Azerbaijani: Azərbaycan Hərbi Dəniz Qüvvələri) is the Naval component of the Azerbaijani Armed Forces operating in the Caspian Sea. 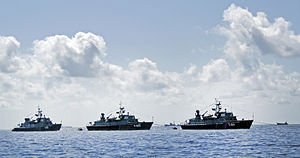 Jane's Fighting Ships said in their entry for the Azeri Navy in their 2001-2002 edition that 'the Coast Guard was formed in July 2002 with ships transferred from the Caspian Flotilla and the Border Guard. By 1995 overall control had been resumed by the Russians in order to provide adequate maintenance and support. The aim is to be independent again in due course.'[1] It named the navy's commander at the time as Captain Rafig Asgarov. Currently, the navy is led by Vice Admiral Shahin Sultanov.[3] 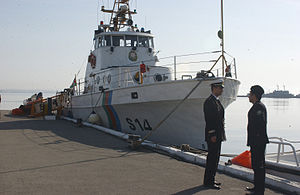 In 2001, Azerbaijan created a special forces unit which was established with cooperation with the Turkish Navy. The training and organisation structure of the unit may be similar to Turkish special forces, Su Altı Taarruz and United States Special Forces who have a training relationship with them.[4]

In 2004 a U.S. Navy SEAL team from Little Creek Amphibious Base, Va., participate in joint exercises with the Azeri Navy’s 641st Special Warfare Naval Unit, headquartered at the Azeri Naval Station outside Baku.[5] The unit has been described as an 'impressive new maritime special forces unit.[6] 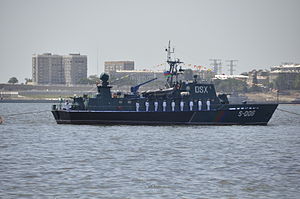 Azerbaijani Navy personnel during a military parade in Baku.

In 2006, the U.S. Government donated three motorboats to the Azerbaijani Navy. There is also an agreement to provide U.S. support to refurbish Azerbaijani warships in the Caspian Sea.

On May 19, 2006, the Azerbaijani and Turkish Navy held a joint military exercise on safeguarding the security of oil and gas pipelines in Baku. The training session was observed by Azerbaijan Navy commander Shahin Sultanov and Turkish Armed Forces attaché Seyhan Ceyhan. The activities aimed to ensure the safety of the Baku-Tbilisi-Ceyhan pipeline (BTC), the main export pipeline to take Caspian oil to Turkey and further on to world markets, as well as on expanding cooperation between the two countries’ military. The exercises started with the clearance of mines on the seabed. This was followed by rendering harmless the traps planted in the area by symbolic terrorists. The training concluded with the practice of maritime and air operations.[8]

In 2007, an agreement between the Azerbaijani Navy and a U.S. military company was concluded, which stated that a part of the Azerbaijani Navy would be equipped with advanced laser marksmanship devices/systems. U.S. company specialists were also due to give training for the use of this new equipment.[9] 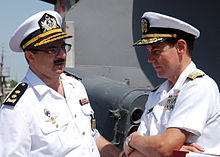 The Caspian Guard Initiative is a framework program designed to coordinate activities in Azerbaijan and Kazakhstan with those of U.S. Central Command and other U.S government agencies to enhance Caspian security. The initiative assists the two countries in improving their ability to prevent and, if needed, respond to terrorism, nuclear proliferation, drug and human trafficking, and other transnational threats in the Caspian region. EUCOM is responsible for operations in Azerbaijan.[10]