From Infogalactic: the planetary knowledge core
(Redirected from Bön)
Jump to: navigation, search
This article is about Tibetan religion. For other uses, see Bon (disambiguation). 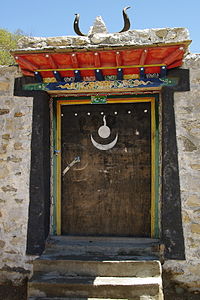 Bon or Bön[1] (Tibetan: བོན་, Wylie: bon, Lhasa dialect IPA: [pʰø̃̀]) is a Tibetan religious tradition or sect, being distinct from Buddhist ones in its particular myths, although many of its teachings, terminology and rituals resemble Tibetan Buddhism. It arose in the eleventh century[2] and established its scriptures mainly from termas and visions by tertöns such as Loden Nyingpo.[3] Though Bon terma contain myths of Bon existing before the introduction of Buddhism in Tibet, "in truth the 'old religion' was a new religion."[3]

As Bon only arose in the eleventh century through the work of tertons, Sam van Schaik states it is improper to refer to the pre-Buddhist religion of Tibet as Bon:

Though some people call the old pre-Buddhist religion of Tibet ‘Bon’, it is unlikely that before Buddhism the Tibetans had a clear sense of practising a religion as such, or a speciﬁc name for these practices. In fact, the Bonpo religion only started to take shape alongside the revival of Buddhism in the eleventh century. And when the scriptures of the Bonpo started to appear in Tibet, it was mainly through the work of tertons.[3]

Three Bon scriptures--mdo 'dus, gzer mig, and gzi brjid--relate the mythos of Tonpa Shenrab Miwoche. The Bonpos regard the first two as gter ma rediscovered around the eleventh century and the last as nyan brgyud (oral transmission) dictated by Loden Nyingpo, who lived in the fourteenth century.[4] In the fourteenth century, Loden Nyingpo revealed a terma known as The Brilliance (Wylie: gzi brjid), which contained the story of Tonpa Shenrab. He was not the first Bonpo tertön, but his terma became one of the definitive scriptures of Bon religion.[3] It states that Shenrab established the Bon religion while searching for a horse stolen by a demon. Tradition also tells that he was born in the land of Tagzig Olmo Lung Ring (considered[by whom?] an axis mundi) which is traditionally identified as Mount Yung-drung Gu-tzeg (“Edifice of Nine Sauwastikas”), possibly Mount Kailash, in western Tibet. Due to the sacredness of Tagzig Olmo Lungting and Mount Kailash, the Bonpo regard both the swastika and the number nine as auspicious and as of great significance.

Tonpa Shenrab Miwoche visited Kongpo and found people whose practice involved spiritual appeasement with animal sacrifice. He taught them to substitute offerings with symbolic animal forms made from barley flour. He only taught according to the student's capability with lower shamanic vehicles to prepare; until with prayer, diligence, devotion and application they could incarnate to achieve sutra, tantra and Dzogchen.[5]

Bon teachings feature Nine Vehicles, which are pathway-teaching categories with distinct characteristics, views, practices and results. Medicine, astrology, and divination are in the lower vehicles; then sutra and tantra, with Dzogchen great perfection being the highest. Traditionally, the Nine Vehicles are taught in three versions: as Central, Northern and Southern treasures. The Central treasure is closest to Nyingma Nine Yānas teaching and the Northern treasure is lost. Tenzin Wangyal Rinpoche elaborated the Southern treasure with shamanism.[5]

“A Cavern of Treasures” (mdzod phug)

“A Cavern of Treasures” (Tibetan: མཛོད་ཕུག, Wylie: mdzod phug) is a Bon terma uncovered by Shenchen Luga (Tibetan: གཤེན་ཆེན་ཀླུ་དགའ, Wylie: gshen chen klu dga') in the early 11th century.[6] Martin[7] identifies the importance of this scripture for studies of the Zhang-Zhung language:

For students of Tibetan culture in general, the mDzod phug is one of the most intriguing of all Bon scriptures, since it is the only lengthy bilingual work in Zhang-zhung and Tibetan. (Some of the shorter but still significant sources for Zhang-zhung are signalled in Orofino 1990.)[8]

The Dzungar people invaded Tibet in 1717 and deposed a pretender to the position of Dalai Lama who had been promoted by Lhabzang, the titular King of Tibet. This met with widespread approval. However, they soon began to loot the holy places of Lhasa, which brought a swift response from the Kangxi Emperor in 1718, but his military expedition was annihilated by the Dzungars not far from Lhasa.[9][10]

Many Nyingmapas and Bonpos were executed and Tibetans visiting Dzungar officials were forced to stick their tongues out so the Dzungars could tell if the person recited constant mantras, which was said to make the tongue black or brown. This allowed them to pick the Nyingmapas and Bonpos, who recited many magic-mantras.[11] A habit of sticking one's tongue out as a mark of respect on greeting someone has remained a Tibetan custom into modern times.[citation needed]

In the 19th century, Shardza Tashi Gyaltsen, a Bon master whose collected writings comprise eighteen volumes significantly rejuvenated the tradition. His disciple Kagya Khyungtrul Jigmey Namkha trained many practitioners to be learned in not only the Bon religion, but in all Tibetan schools.

According to the Bonpo, eighteen enlightened entities will manifest in this aeon and Tönpa Shenrab Miwoche, the founder of Bon, is considered the enlightened Buddha of this age (compare yuga and kalpa). The 33rd lineage holder of Menri Monastery, Menri Trizin Lungtog Tenpei Nyima and Lopön Tenzin Namdak are important current lineage holders of Bon.

More than three hundred Bon monasteries had been established in Tibet prior to Chinese annexation. Of these, Menri Monastery and Shurishing Yungdrung Dungdrakling Monastery were the two principal monastic universities for the study and practice of Bon knowledge and science-arts. 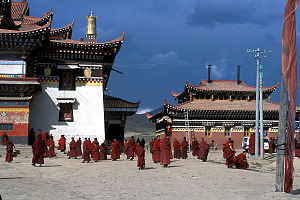 The Bon monastery of Nangzhik Gompa at Ngawa Town, in Sichuan.

Ethnic Tibet is not confined culturally to the Tibet Autonomous Region. The broader area of ethnic Tibet also includes, to the east, parts of the Chinese provinces of Sichuan, Qinghai, Gansu and Yunnan; to the west, the Indian regions of Ladakh, Lahaul and Spiti and the Baltistan region of Pakistan; the extreme north-west of Assam; and to the south, Bhutan, Sikkim, and parts of northern Nepal, such as Mustang and Dolpo, the regions in northeastern Nepal inhabited by Sherpa and Tamang peoples, and extreme northern Burma (Myanmar). Even parts of modern Bangladesh was once a part of this "Greater Tibet."

Bonpos cultivate household gods in addition to other deities:

Traditionally in Tibet divine presences or deities would be incorporated into the very construction of the house making it in effect a castle (dzongka) against the malevolent forces outside it. The average Tibetan house would have a number of houses or seats (poe-khang) for the male god (pho-lha) that protects the house. Everyday [sic] the man of the house would invoke this god and burn juniper wood and leaves to placate him. In addition the woman of the house would also have a protecting deity (phuk-lha) whose seat could be found within the kitchen usually at the top of the pole that supported the roof.[12]

Another set of deities are the White Old Man, a sky god, and his consort. They are known by a few different names, such as the Gyalpo Pehar called “King Pehar” (Wylie: pe har rgyal po). Pehar is featured as a protecting deity of Zhangzhung, the center of the Bon religion. Reportedly, Pehar is related to celestial heavens and the sky in general. In early Buddhist times, Pehar transmogrified into a shamanic bird to adapt to the bird motifs of shamanism. Pehar’s consort is a female deity known by one of her names as Düza Minkar (Wylie: bdud gza smin dkar, Stein1954 in Hummel 1962). 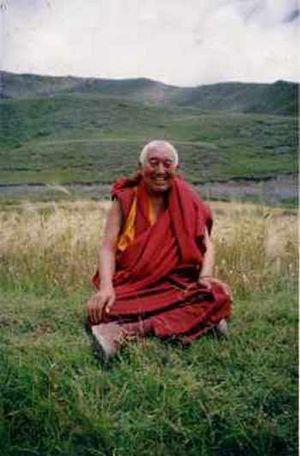 Lopön Tenzin Namdak, abbot of a Bon monastery in Nepal

The present spiritual head of the Bon is Lungtok Tenpa'i Nyima (b. 1929), the thirty-third Abbot of Menri Monastery (destroyed in the Cultural Revolution, but now rebuilt), who now presides over Pal Shen-ten Menri Ling in Dolanji in Himachal Pradesh, India, for the abbacy of which monastery he was selected in 1969.

A number of Bon establishments also exist in Nepal; Triten Norbutse Bonpo Monastery is one on the western outskirts of Kathmandu. Bon's leading monastery is the refounded Menri Monastery in Dolanji, Himachal Pradesh, India.

Many Bon elements are in the Hangui (韩规) religion of the Pumi people.[13]

Lobsang Yeshe, recognised as the 5th Panchen Lama by the 5th Dalai Lama, was a member of the Dru family, an important family of the Bon religion. Under Lozang Gyatso, Bon became respected both philosophically and politically.[14] However, the Bonpo remained stigmatised and marginalised until 1977, when they sent representatives to Dharamsala and the 14th Dalai Lama, who advised the Parliament of the Central Tibetan Administration to accept Bon members.

Since then, Bon has had official recognition of its status as a religious group, with the same rights as the Buddhist schools. This was re-stated in 1987 by the Dalai Lama, who also forbade discrimination against the Bonpos, stating that it was both undemocratic and self-defeating. He even donned Bon ritual paraphernalia, emphasizing "the religious equality of the Bon faith."[15]

However, Tibetans still differentiate between Bon and Buddhism, referring to members of the Nyingma, Shakya, Kagyu and Gelug schools as nangpa, meaning "insiders," but to practitioners of Bon as "Bonpo," or even chipa ("outsiders").[16][17]