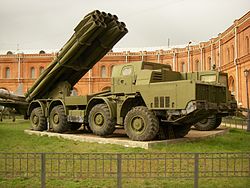 The BM-30 Smerch (Russian: Смерч, "whirlwind") or 9A52-2 Smerch-M is a Soviet heavy multiple rocket launcher. The system is designed to defeat personnel, armored, and soft-skinned targets in concentration areas, artillery batteries, command posts and ammunition depots. It was created in the early 1980s and entered service in the Soviet Army in 1989.[1] When first observed by the West in 1983, it received the code MRL 280mm M1983. It is expected to be superseded by the 9A52-4 Tornado.

The first confirmed combat uses of the Smerch were in two war zones in 2014. Syrian military forces used the system against rebel forces in 2014 during the Syrian civil war.[2] It was also used by Ukrainian government forces to deliver explosive and cluster munitions to Donetsk and Lugansk cities during the War in Donbass.[3][4] Several have been seen in use by pro-Russian rebels.[5][6] The Russian Ground Forces used the BM-30 in Syria in October 2015 during the Russian intervention in Syria.[7]

The main components of the RSZO 9K58 "Smerch" system are the following:

The 300mm rockets with a firing range of 70 and 90 km and various warheads have been developed for the Smerch MLRS.

The 9A52-2 vehicle with the automated system ensures: 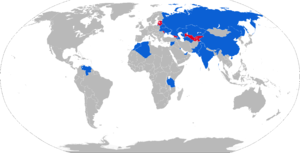 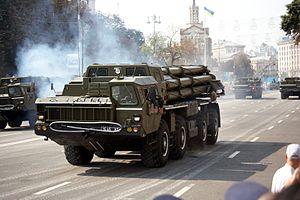 Kuwaiti BM-30 Smerch launchers during a military parade in Kuwait 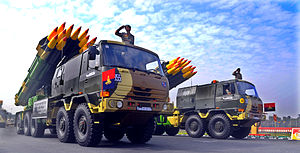 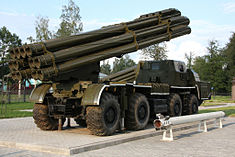 BM-30 Smerch with projectile as a monument to A.N. Ganichev in Tula city