From Infogalactic: the planetary knowledge core
Jump to: navigation, search
This article is about the Soviet infantry fighting vehicle. For other uses, see BMP-2 (disambiguation).

The BMP-2 (Boyevaya Mashina Pekhoty, Russian: Боевая Машина Пехоты; infantry combat vehicle[2]) is a second-generation, amphibious infantry fighting vehicle introduced in the 1980s in the Soviet Union, following on from the BMP-1 of the 1960s.

Although the BMP-1 was a revolutionary design, its main armament, the 2A28 Grom and the 9S428 ATGM launcher capable of firing the 9M14 Malyutka (NATO: AT-3A Sagger A) and the 9M14M Malyutka-M (NATO: AT-3B Sagger B) ATGMs, quickly became obsolete. Therefore, the Soviet Union decided to produce an updated and improved version of the BMP-1. The main emphasis was put on improving the main armament. In 1972, work got under-way to develop an improved version of the BMP-1.

During its combat debut in the Yom Kippur War, Egyptian and Syrian BMPs proved vulnerable to .50 calibre machine-gun fire in the sides and rear, and to 106 mm recoilless rifles. The 73 mm gun proved inaccurate beyond 500 metres, and the AT-3 Sagger missile could not be guided effectively from the confines of the turret.

Several Soviet technical teams were sent to Syria in the wake of the war to gather information. These lessons combined with observations of western AFV developments resulting in a replacement program for the original BMP in 1974. The first product of this program was the BMP-1P upgrade, which was intended as a stopgap to address the most serious problems with the existing design. Smoke grenade launchers were added to the rear of the turret and the manually guided AT-3 Sagger missile system was replaced with the semi-automatically guided AT-4 Spigot and AT-5 Spandrel system. The BMP-1P was in production by the late 1970s and existing BMP-1s were gradually upgraded to the standard during the 1980s.

The BMP-2 is broadly similar to the BMP-1. The most significant changes are:

In the centre of the vehicle is the welded steel turret, which seats the commander and gunner, both of whom have hatches. The commander sits to the right and has three day vision periscopes, a 1PZ-3 day-sight designed for anti-aircraft use with 1x, 2x and 4x magnification, an OU-3GA2 infra-red searchlight, a TNP-165A designator and a TKN-3B binocular sight with 4.75x day magnification and 4x night-sight magnification.

The gunner sits to the commander's left and has a smaller rectangular hatch with a rearward-facing day periscope, additionally there are three other day periscopes facing forward and left. The gunner has a BPK-1-42 binocular sight with a moon/starlight vision range of 650 metres, or 350 metres using the infra-red searchlight, and a TNPT-1 designator. An FG-126 infra-red searchlight is mounted coaxially to the 30 mm cannon.

The driver sits in the front left of the vehicle, with the engine in a separate compartment to his right. The driver has his own entry hatch above him, with three day periscopes. The centre TNPO-170A periscope can be replaced with either a TNPO-350B extended periscope for amphibious operation or a TVNE-1PA night vision scope. An infantryman sits immediately behind the driver, and has a firing port and vision block. TNPO-170A periscopes are used throughout the vehicle and are electrically heated.

The BMP-1 and BMP-2 share the same chassis and have almost identical road performance. The BMP-2 is heavier but also has a more powerful engine to compensate.

The BMP-2 is amphibious with little preparation, using hydrodynamic fairings to convert track momentum into water jets. Peacetime regulations require that any BMPs entering water must have a working radio set, since its bearings are not airtight and it can be carried away by currents in case of loss of engine power (the vehicle lacks an anchor).

The main armament is a stabilized 30 mm 2A42 autocannon with dual ammunition feeds which provide a choice of 3UBR6 AP-T and 3UOR6 HE-T / 3UOF8 HE-I ammunition. The gun has a selectable rate of fire, either slow at 200 to 300 rounds per minute or fast at 550 rounds per minute. The original stabilization provides reasonable accuracy up to a speed of about 35 kilometres per hour.

The commander's 1PZ-3 sight is specifically designed for anti-aircraft operation and combined with the high maximum elevation of 74 degrees, it allows the 30 mm cannon to be used effectively against helicopters and slow flying aircraft. The turret traverse and elevation are powered and it can traverse 360 degrees in 10.28 seconds and elevate through 74 degrees in 12.33 seconds.

Reloading the BMP-2's 30 mm cannon can be somewhat problematic, and can take up to two hours, even if the ammunition is prepared. Additionally, the cannon is normally only used on the slow rate of fire, otherwise fumes from the weapon would build up in the turret faster than the extractor fan can remove them.[citation needed]

A coaxial 7.62 mm PKT machine gun is mounted to the left of the 30 mm cannon, and 2,000 rounds of ammunition are carried for it. On the roof of the turret is an ATGM launcher, on Russian vehicles this fires AT-5 Spandrel missiles, but on export models it normally fires AT-4 Spigot missiles. A ground mount for the missile is also carried, allowing it to be used away from the vehicle. The missiles are a substantial improvement on the AT-3 Sagger missiles used on the BMP-1, in both range and accuracy.

Behind the turret is the troop compartment that holds six troops, the seventh sits just behind the driver. The troops sit back to back, along the centre of the vehicle. Down each side of the compartment are three firing ports with periscopes. Access to the compartment is by the two rear doors, which also hold fuel tanks, both doors have integral periscopes and the left door has a firing port.

In addition to the main weapons, it can carry a man-portable surface-to-air missile launcher and two missiles, and an RPG launcher and five rounds. The vehicle is fitted with a PAZ overpressure NBC system and fire suppression system, and carries a GPK-59 gyrocompass.

The original BMP-1 had a significant shortcoming in its protection scheme, which only became obvious during the war in Afghanistan. The one-man-turret fighting vehicle seated its driver and commander in tandem layout, in the front-left side of the hull alongside the diesel engine. When a BMP-1 hit the obsolete kind of tilt-rod anti-tank land mine, its steeply sloped lower front glacis armour plate allowed the mine's arming rod to tilt with little resistance until the maximum deflection was reached, at which time the mine was already well under the chassis. When it subsequently detonated, the blast usually killed both the driver and the vehicle commander, causing a significant loss of specialist personnel in the Soviet Army.

This shortcoming was addressed in the BMP-2 design, where the tank commander shares the well-armoured two-man turret with the gunner. The driver's station has been enlarged and he is provided with an armoured driver's seat, in addition to extra belly-armour in the lower front.

The BMP-2's armour is broadly similar to the original BMP-1. Its frontal and side armour is not effective against the most recent .50-calibre SLAP (Sabotted Light Anti-armour Projectile) and the 25 mm cannon of the US M2 Bradley MICV or the British GKN Warrior IFV's 30 mm RARDEN. Like the BMP-1, the rear doors of the BMP-2 are filled with diesel fuel offering some risk from incendiary rounds. These additional fuel tanks are shut off from the fuel system when in combat.

The basic hull armour on the BMP-2 can be easily penetrated by any shaped-charge missile, from the 66 mm LAW on up. One important modification carried out as the result of operational experience in Afghanistan was the fitting of a second layer of stand-off armour, usually a high resistant ballistic rubber-like material, to act as spaced armour around the top of the hull sides and around the attack. 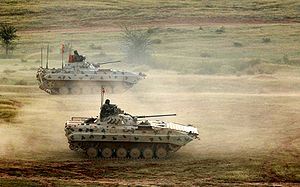 In the Soviet Army, BMPs were typically issued to the motor rifle battalions of tank regiments. In a typical motor-rifle division, one motor-rifle regiment had BMPs, the other two had wheeled BTRs.

Proliferation varied greatly among the rest of the Warsaw Pact nations. For example, at least some East German motor-rifle divisions were recorded to have all three motor-rifle regiments with BMPs, ranging down to the Romanian and Bulgarian Armies, some of whose divisions had no BMPs at all.[3]

Poland planned to replace its BWP-1 with BWP-2 (BMP-2 and BMP-2D); but, because of financial problems, only ordered 62 vehicles in 1988, which were delivered in 1989. Since obtaining sufficient number of BWP-2 vehicles after political changes of 1989 became impossible, Poland was forced to abandon this plan. 62 BWP-2 that Poland bought were sold in 1995 to Angola.[4][5][6] 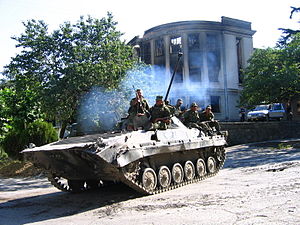 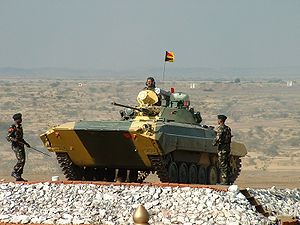 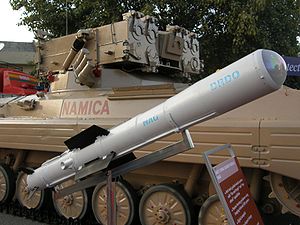 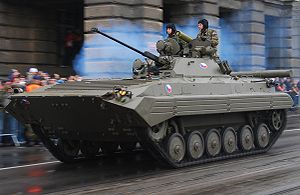 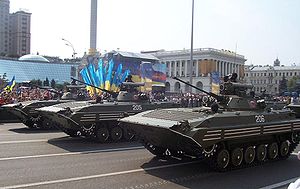