The BPM-97 (Boyevaya Pogranichnaya Mashina - "Battle Vehicle of the Border Guard") or Выстрел (Vystrel) is the Russian military designation for the KAMAZ 43269 Vystrel 4×4 wheeled mine-resistant, ambush protected (MRAP) vehicle. It is produced fitted with several different turrets like the one of the BTR-80A. The vehicle is based on the KAMAZ-43269 and as the name suggests was designed for the Russian Border Guards. The latest model has bulletproof side windows and no gun turret. It has been ordered by Kazakhstan and by the MVD Internal Troops, Federal Prison Service and EMERCOM.

Development began in 1997 at the initiative of the head of the Russian Border Guard Service Andrei Nikolaev. Armored vehicle meant to replace the border guards' main transport GAZ-66. But after a government funding default in 1998, the much delayed public funding of the project finally stopped. In order to offset the cost of the development in the absence of government orders, machines were allowed to be sold to civilian companies. The armored vehicle was used for the transportation of explosives, money and valuable goods. After receiving permission in 2005, some cars were sold to the Ministry of Internal Affairs of Kazakhstan and Azerbaijan. Production of the "Vystrel" is ongoing at the JSC "Remdizel" plant in Naberezhnye Chelny, where the armoured body and KAMAZ 4326 truck chassis are integrated.[3] Armored Car "Shot" entered service in the Russian Defense Ministry in 2009. Antiterrorist units of all divisions of the Strategic Missile Forces equipped with armored vehicles "KAMAZ-43269" ("The Shot"), reported on May 3, 2013 the official representative of the press and information service of the Russian Ministry of Defense for Strategic Missile Forces Colonel Igor Egorov.[4]

The vehicle is divided into the engine compartment and separate crew areas. The body has both side and rear doors, and roof hatches for exiting.

Armament varies, the BPM-97 is available with pintle mounted or turret mounted 7.62 mm, 12.7 mm machine guns such as the Kord 12.7mm, 14.5 mm KPV heavy machine guns in a BTR-80 type turret, and a combination turret fitted with a sighting device with 30 mm cannon and 30 mm AGS-30 automatic grenade launchers. 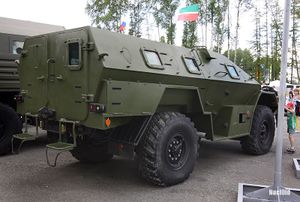 In 2008, KamAZ planned to create a similar three-and four-axle vehicle designed for 13 and 18 men, respectively.[6]

In 2010, JSC "Krasnodar Instrument Factory Cascade" in exhibition MVSV 2010 was announced 15M107 machine based on KAMAZ-43269 "The Shot",[10] intended for remote search and clearance of minefields, having in its composition electronic administration circuits. 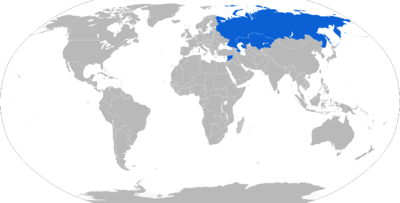 Map of BPM-97 operators in blue