The BTR-152 (also known as BTR-140) was a non-amphibious Soviet wheeled armored personnel carrier (БТР, from Бронетранспортер/Bronetransporter, literally "armoured transporter") †[dead link]) that entered Soviet service in 1950. By the early 1970s, it had been replaced in the infantry vehicle role by the BTR-60. However, it remained in service in the Soviet Army and the Russian Army until 1993 in a variety of other roles. It was also exported to many Third World countries.

During the Second World War, the Soviet tacticians incorporated joint infantry and tank attacks against German forces, both serving in roles to protect the other. Performance was less than desirable as the infantry lacked the armored protection and rapid mobility of the tank, and thus unarmoured troops were vulnerable to enemy fire. This led to the employment of armoured infantry carriage vehicles known as APCs which overcame these shortcomings.(Perrett 1987:65)

After the war, the Soviet military analysed the high infantry casualty rate of combined infantry-tank attacks and concluded that the lack of APCs was a major cause. A remedy to this vulnerability in maneuver warfare was given high priority. The Soviet military industrial complex had Lend-Lease vehicles, such as the M3 Half-track and captured German Hanomag SdKfz 251s, to serve as references. (Perrett 1987:65)

The BTR-152 was one of the first Soviet armoured infantry vehicle after the Second World War. It was developed from November 1946 at ZiS plant by a team (it included K. M. Androsov, A. P. Petrenko, V. F. Rodionov and P. P. Chernyaev)[1] led by B. M. Fitterman. The first two prototypes were completed in May 1947 and were followed by three experimental series. The vehicle was adopted by the Soviet Army on 24 March 1950. The vehicle was based on the existing ZiS-151 truck chassis. Despite an improved engine, the addition of 5 tons of armour resulted in the vehicle having insufficient mobility.

Several upgraded versions, which later entered production, were designed by V. F. Rodionov and N. I. Orlov.[1] These rectified many problems, such as the open roof and the mobility issue. A central tire pressure regulation system was added to allow tire pressure to be adjusted to optimize traction in varying terrain. 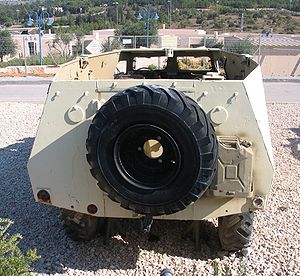 BTR-152 APC in Yad La-Shiryon Museum, Latrun. 2005. A spare tire mounted on the rear of the vehicle is visible.

The BTR-152, based on a truck chassis, has the engine located in the front, the crew behind the engine, and an open-topped troop compartment in the rear. The vehicle has all-welded steel construction with sloped armour. The windscreen is protected by twin armoured shutters with integral vision blocks. Driver and commander enter and exit the vehicle via the doors on each side of the crew compartment. The upper part of the doors can be opened without opening the entire door, allowing both crew members a side view. Additionally, both driver and commander can view the battlefield using periscopes mounted over the doors. The vehicle's armour varies from 15 mm thick on the front to 9 mm thick on the sides, to just 4 mm thick on the floor. This provides modest protection from small arms fire and small shell fragments, but does nothing against larger artillery fragments or heavy machinegun fire. The BTR-152's tires are not protected by armour and are particularly vulnerable to puncture from gunfire of all kinds. The vehicle is sometimes fitted with a winch that has a maximum capacity of 5 tonnes and a 70 m cable.[2][4]

The BTR-152 can tow heavy guns, transport 1.9 tonnes of cargo, or a half platoon of infantry. In the APC role, infantrymen can fire their individual weapons from the relative protection of the vehicle, and can exit through the rear doors or by jumping over the sides.[1][4][7]

The troop compartment is open-topped, although later versions were enclosed. It can be covered with a tarpaulin to protect the transported cargo or troops from rain and snow; however, it would then be impossible for troops to disembark over the sides of the vehicle or mount any of the 7.62 mm SGMB medium machine guns. The transported troops sit on two wooden benches. Twin doors at the rear of the hull provide access to the compartment. There are three firing ports on each side of the hull, and a further two in the rear. The driver and gunner are the only ones that have overhead protection. The BTR-152K is the only APC variant to have an armoured roof over the troop compartment and an NBC protection system. All other BTR-152 variants lack NBC protection. 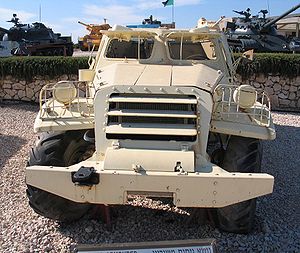 The BTR-152 APC is armed with a single pintle-mounted 7.62 mm SGMB medium machine gun, which was a typical armament for APCs of its time. It can also mount a 12.7 mm DShK 1938/46 heavy machinegun. The machinegun can traverse 45 degrees and elevate between -6 and +24 degrees.[4]

Because the original BTR-152 APC used components from the ZiS-151, it shared that truck's maintenance problems and poor cross-country mobility. Later variants, using ZiL-157 components, had more power and larger, single tires that reduced the vehicle's shortcomings but did not entirely eliminate them. Serviceability and reliability remained low.[7] The lack of an amphibious capability was also a significant weakness.

Armoured shutters controlled by the driver protect the radiator from hostile fire. Closing the shutters can result in sudden overheating of the engine during combat and can force the driver to reduce speed to avoid damaging the engine. The vehicle therefore becomes a slow, unmaneuverable target on the battlefield.[4]

The vehicle entered active service with the Soviet Army on 24 March 1950 and was first publicly shown during a parade in Moscow in 1951. It was phased out as an APC between the late 1960s and early 1970s and was replaced by the BTR-60. It remained in service with the Soviet Army and later post-soviet Russian Army until 1993 in a variety of roles, including command vehicles, mobile radio stations and ambulances. It was also exported to many Third World countries where some still remain in service.

The BTR-152 first saw combat use during Hungarian Revolution of 1956. They were later used during the Six Day War in 1967. Dozens of Egyptian and Syrian BTR-152 APCs were captured by the Israeli Army. A few saw combat during the Soviet invasion of Czechoslovakia in 1968 by the Soviet Army and other Warsaw Pact armies. They also were used in a number of local conflicts in Africa, including the South African Border War and Zimbabwe's 1981 Entumbane Uprising.[8][9] 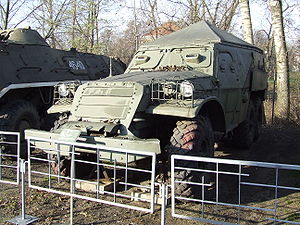 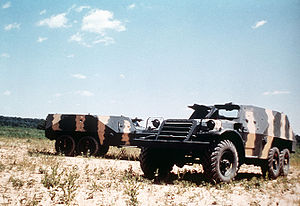 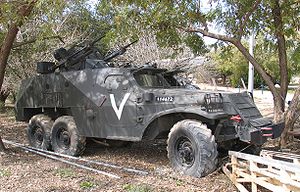 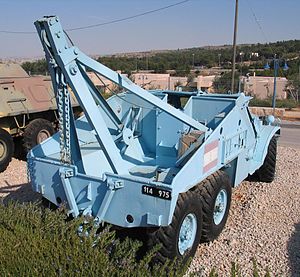 BTR-152 converted into an ARV by Lebanese Militia next to a BTR-60 APC in Yad la-Shiryon Museum, Latrun, 2005. 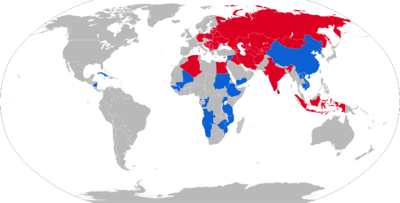