The BTR-50 (BTR stands for Bronetransporter (БТР, Бронетранспортер, literally "armored transporter") [2] is a Soviet amphibious armored personnel carrier (APC) based on the PT-76 light tank. The BTR-50 is tracked, unlike most in the BTR series, which are wheeled. The BTR-50 shares many similarities with two other APCs, the OT-62 TOPAS and the Type 77. While the OT-62 is an improved copy of the BTR-50 developed jointly by Czechoslovakia and Poland, the Type 77, based on the Type 63 amphibious light tank developed by the People's Republic of China (PRC), is not a copy of the BTR-50. 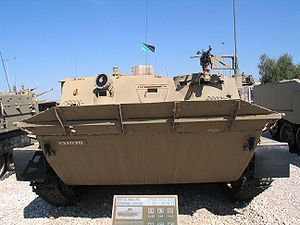 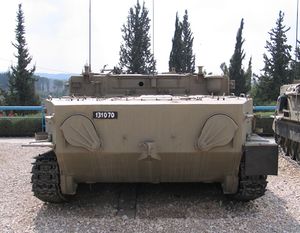 Rear view of the same APC. The two water-jets have their lids closed.

Like the PT-76, the BTR-50 has a flat, boat-shaped hull. Unlike the PT-76, it has a new superstructure added to the front of the vehicle. The hull of the BTR-50 is made of all-welded steel with the crew compartment in the front, the troop compartment in the center and the engine compartment at the rear. It has the ability to transport up to 20 fully equipped infantrymen, who sit on benches that run across the full width of the troop compartment. They mount and dismount the APC by climbing over the sides of the hull. The driver sits in the center of the front of the hull and has three vision blocks and periscopes located at the top of the sloping glacis plate. During night operations, the center periscope can be swapped for the TVN-28 night vision device, which gves the driver clear vision up to 60 meters. The driver also has a small hatch that opens upwards - while it cannot be used to leave the vehicle, it can be opened in relatively safe areas for extra vision. In combat, the hatch is closed and the driver can use a vision block. There is an emergency hatch under the driver's seat. The commander, who sits on the left side of the vehicle at the front, has three vision blocks and periscopes in a projecting bay. On top of this bay is a cupola that opens forward and can be locked vertically; it has a vision block facing forward. The vehicle can operate in temperatures from -40 °C to +40 °C.[3]

The torsion bar suspension consists of six evenly spaced large rubber-tired road wheels with a drive sprocket at the rear and an idler at the front. The road wheels are hollow to assist its amphibious capabilities. These wheels increase the APC's buoyancy by 30%. There are no track-return rollers. The first and last road wheels have a hydraulic shock absorber, the steel tracks have a single pin and 96 links each when new. There is a small, thin, horizontal skirt over each track. The BTR-50 is powered by a V-6 6-cylinder 4-stroke in line water-cooled diesel engine developing 240 hp (179 kW) at 1800 rpm. This gives it a road speed of 44 km/h with a cruising range of 400 km. The vehicle can negoiate 30° side slopes, ascend 60° gradients, cross 1.1 m high vertical obstacles and 2.8 m wide trenches. The engine has a cooling system and a pre-heater (intended for ignition when the air temperature is −20 °C or below). The APC has a five gear manual shaft-type transmission system similar to that in the T-34/85 medium tank. The gearbox has four forward and one reverse gear. The vehicle has a side clutch that enables it to make turns, mechanical transmission and a bandbrake. The vehicle has three fuel tanks, two on the right at the front of the engine compartment and one at the rear. The total fuel capacity is 400 liters. The vehicle has four mounts for additional external fuel tanks located on the rear of the hull; the two on the hull corners are for a flat external tanks, whereas the two in the center are for a drum-type of tank.[1]

The BTR-50 is amphibious thanks to its flat, boat-shaped hull, which is hermetically sealed and ensures minimal resistance when the APC is afloat. It can swim after switching on the two electric bilge pumps; erecting the trim vane which improves the stability and displacement of the vehicle in the water and prevents water from flooding over the bow of the APC. Swapping the driver's periscope for a swimming periscope enables the driver to see over the trim vane. There is also a manual bilge pump for emergency use. In the water, it is propelled by two hydrojets, one on each side of the hull, the inlets are under the hull, the outlets are at the rear. There are also additional assistant water-jet inlets on both sides of the hull over the last road wheels. The rear outlets have lids that can be fully or partially closed, redirecting the water stream to the forward-directed outlets at the sides of the hull, thus enabling the vehicle to turn. This system was designed by N. Konowalow. It is the same system as the one used in the PT-76. The vehicle's low freeboard of 15 to 20 cm and lack of a snorkel means that it can only swim in the calmest waters.

Its armor is composed of homogeneous, cold rolled, welded steel - it is very thin by modern standards, 13 mm at the front, 10 mm on the sides and top and 7 mm at the rear. While its maximum armor protects it fully against small arms fire and small artillery shell fragments, it cannot protect it against large shell fragments and .50-caliber machine gun bullets. Although its front armor might protect it against 7.62 mm small arms fire, that same fire can sometimes penetrate the sides. The vehicle is equipped with an IR driving light and an IR searchlight. It lags behind other Soviet armored fighting vehicles as it has no fire protectiuon systems and, with the exception of the BTR-50PK variant, it has no nuclear, biological or chemical (NBC) protection systems, which significantly reduces its effectiveness. The only variant to have a NBC protection system is the .[4] 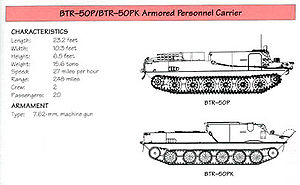 A US Army recognition poster.

The BTR-50 was developed in 1952 and entered service with the Soviet Army in 1954. It was first shown in public in November 1957. It served in the motorized rifle regiments of tank divisions and mechanized brigades in the Soviet and East German armies.[1] A typical mechanized brigade consisted of three battalions,each of which had 30 APCs and a command vehicle. They were replaced in front line service by the BMP-1 IFV. Command vehicle variants were employed by many Warsaw Pact armies.[1]

BTR-50s were used by Egypt and Syria during the Six-Day War (1967), a number of which were captured by Israel.[5] Some vehicles were then re-used by the Israeli Army. Both sides used BTR-50s during the War of Attrition (1968-1970). During Operation "Raviv" (September 8–9, 1969), an amphibious raid across the Suez Canal, three T-54 tanks and six BTR-50s were used to wreak havoc behind Egyptian lines.[6] BTR-50s were again employed by Egypt, Syria and Israel during the Yom Kippur War (1973). During this conflict, BTR-50s, along with T-54s and T-55s, were used by the IDF during the fighting in and around the city of Suez. The Yom Kippur War also witnessed Israel capture additional BTR-50s from the Egyptians and Syrians.[5] Some of Israel's BTR-50s were later transferred to the South Lebanon Army. 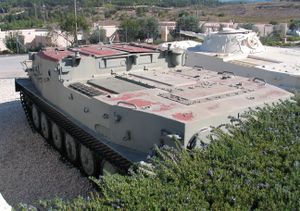 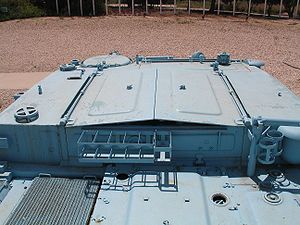 Close-up of the top hatches. 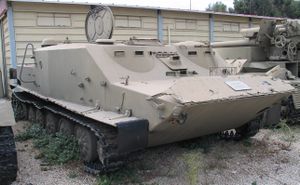 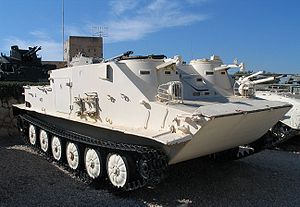 An OT-62 TOPAS APC in Yad la-Shiryon Museum, Israel. 2005. Note the second bay and the side hatch. 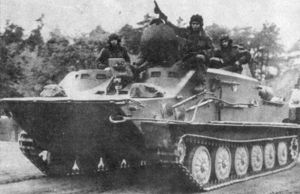 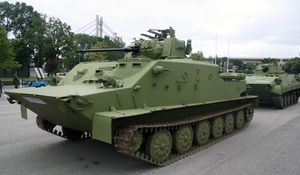 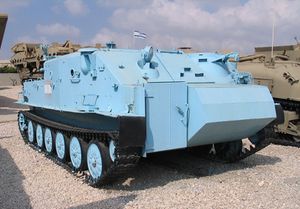 Improvements in firepower are achieved by adding one of two new fighting modules (turrets), both of which are armed with one 30 mm ZTM1 or 2A72 autocannon, one 7.62 mm KT or PKT coaxial machine gun, one 9K113 Konkurs (NATO: AT-5 Spandrel) ATGM and one 30 mm AGS-17 automatic grenade launcher. Both main guns are stabilized in the vertical axis (the second variant has a two axis stabilization) and have electro-mechanical aiming drives. Both have a maximum effective range of 4,000 m and can be elevated or depressed between −10° and +60° or −4° and +60°. The vehicle carries 150 rounds (the second variant carries 350 rounds).[3]

The vehicle uses a number of instruments with its armament. These include the TKN-5 day/night sight with a laser rangefinder, the PZU-7 day sight for firing at air and ground targets and the 9Sh119M1 anti-tank guided missile system sight.[3]

Mobility is improved by replacing the Soviet-built engine with the UTD-20 6-cylinder 4-stroke V-type water-cooled diesel engine built in the Ukraine, replacing the gearbox with a planetary system and installing hydraulic volumetric transmission. The suspension has also been improved by adding three return rollers. The vehicle has a new system of air intakes and exhausts on the left hand side of the front of the engine deck. This upgrade can also be applied to BTR-50PU vehicles. This vehicle has a greater combat capability, lower fuel consumption and a higher power-to-weight ratio. The vehicle can operate in temperatures between −40 °C and +55 °C and has an increased road speed of 75 km/h.[3][4]

There are also additional improvements which can be carried out at customer's request. Those include adding kevlar-type spall liner to improve vehicle's protection, navigation system for improving tactical mobility and air conditioning system for improving crew comfort and allowing easier operation in hot climate.[3] 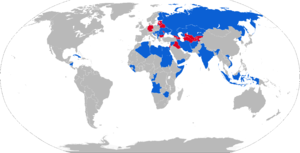 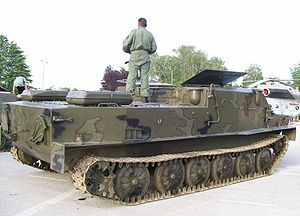 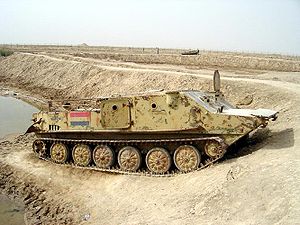