The BTR-D is a Soviet airborne multi-purpose tracked armoured personnel carrier which was introduced in 1974 and first seen by the West in 1979 during the Soviet war in Afghanistan. BTR-D stands for Bronetransportyor Desanta (БТР, Бронетранспортер Десанта, literally "armoured transporter of the Airborne").[14] It is based on BMD-1 airborne IFV. NATO gave it the designation BMD M1979.[1][2][3][4][5][10]

In 1969, the BMD-1 airborne IFV entered service with the Soviet Army. The vehicle had many flaws, but the biggest one was the fact the troop compartment was extremely cramped and could only transport up to four infantrymen; in fact, this number was often shortened to three because it was impractical for four infantrymen to operate inside the troop compartment and dismount the vehicle. Because of that, in the beginning of the 1970s, the Volgograd Tractor Factory design bureau, who designed the BMD-1, began designing a new airborne APC based on the BMD-1. The prototype was ready in 1974 and in the same year it entered production and service with the Soviet Army as the BTR-D.

The crew consists of the driver, the commander and the left bow mounted machine gun gunner, all of whom are in the same positions and have the same equipment as in the BMD-1.

The BTR-D is powered by the same engine as the BMD-1, however, its suspension is longer because the entire vehicle has been lengthened by 60 mm. Because of this, the vehicle has six roadwheels on each side instead of five. It also has five return rollers on each side unlike the BMD-1, which has four.

The armour protection is slightly better on the BTR-D than on the BMD-1. That's because the upper front armour has a dual slanted angle.[3][4][5] Also, its armour is made out of aluminium,[10] which proved to be much better than the armour on the BMD-1, which was made out of a cast magnesium alloy that caught fire and burned fiercely, often killing the crew, if hit with a weapon such as an RPG.

Because the turret has been removed, the troop compartment has been enlarged and can carry up to ten fully equipped soldiers. It's also linked with the crew compartment in the front. Also, there are two firing ports in the sides and one in the rear, two of which are for RPK-74 light machine guns.[1][3][4][5]

The BTR-D has all the same equipment as the BMD-1, but also has towing equipment for ZU-23-2 twin AA autocannon.[10]

The BTR-D entered service with the Soviet Army in 1974 and was used by Soviet airborne troops during the Soviet war in Afghanistan, where it was seen for the first time by the West in 1979.

As of now, the BTR-D and vehicles based on it are used by the following units of Russian Army or are stationed in following bases: 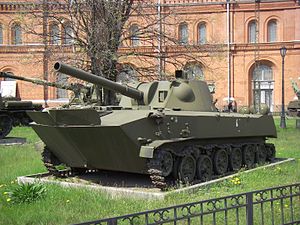