From Infogalactic: the planetary knowledge core
Jump to: navigation, search
File:SubZone.jpg
Cross-section through the shallow part of a subduction zone showing the relative positions of an active magmatic arc and back-arc basin, such as the southern part of the Izu-Bonin-Mariana Arc.

Back-arc basins are geologic features, submarine[citation needed] basins associated with island arcs and subduction zones. They are found at some convergent plate boundaries, presently concentrated in the Western Pacific ocean. Most of them result from tensional forces caused by oceanic trench rollback (the oceanic trench is wandering in the seafloor direction) and the collapse of the edge of the continent. The arc crust is under extension/ rifting as a result of the sinking of the subducting slab. Back-arc basins were initially a surprising result for plate tectonics theorists, who expected convergent boundaries to be zones of compression, rather than major extension. However, they are now recognized as consistent with this model in explaining how the Earth loses heat. 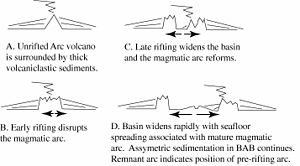 Back-arc basins are typically very long (several hundreds to thousands of kilometers) and relatively narrow (a few hundred kilometers). The restricted width of back-arc basins is probably because magmatic activity depends on water and induced mantle convection and these are both concentrated near the subduction zone. Spreading rates vary from very slow spreading (Mariana Trough), a few centimeters per year, to very fast (Lau Basin), 15 cm/year. These ridges erupt basalts that are similar to those erupted from the mid-ocean ridges; the main difference is that back-arc basin basalts are often very rich in magmatic water (typically 1-1.5 weight % H2O), whereas mid-ocean ridge basalt magmas are very dry (typically <0.3 weight % H2O). The high water contents of back-arc basin basalt magmas is derived from water carried down the subduction zone and released into the overlying mantle wedge. Additional source of water could be the eclogitization of amphiboles and micas in the subducting slab. Similar to mid-ocean ridges, back-arc basins have hydrothermal vents and associated chemosynthetic communities. 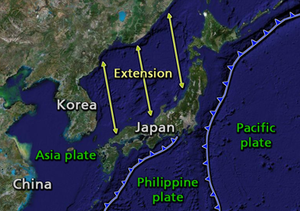 Back-arc basins are different from normal mid-ocean ridges because they are characterized by asymmetric seafloor spreading, but this is quite variable even within single basins. For example, in the central Mariana Trough current spreading rates are 2-3 times greater on the western flank[1] whereas at the southern end of the Mariana Trough the position of the spreading center adjacent to the volcanic front suggests that overall crustal accretion has been nearly 100% asymmetric there.[2] This situation is mirrored to the north where a large spreading asymmetry is also developed.[3] Other back-arc basins such as the Lau Basin have undergone large rift jumps and propagation events that have transferred spreading centers from arc-distal to more arc-proximal positions [4] although recent spreading rates appear to be relatively symmetric with perhaps small rift jumps.[5] The cause of asymmetric spreading in back-arc basins remains poorly understood. General ideas invoke asymmetries relative to the spreading axis in arc melt generation processes and heat flow, hydration gradients with distance from the slab, mantle wedge effects, and evolution from rifting to spreading.[6][7][8]

Back-arc basins are hypothesized to form as a result of trench rollback (also, hinge rollback). This is the backward motion of the subduction zone relative to the motion of the plate which is being subducted. As the subduction zone and its associated trench pull backward, the overriding plate is stretched, thinning the crust which is manifest in the back-arc basin. Sedimentation is strongly asymmetric, with most of the sediment supplied from the active magmatic arc which regresses in step with the rollback of the trench. 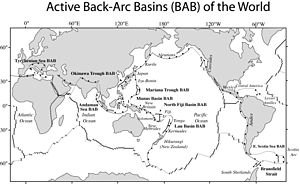 The active back-arc basins of the world

With the development of plate tectonic theory, geologists thought that convergent plate margins were zones of compression, thus zones of strong extension above subduction zones (back-arc basins) were not expected. The hypothesis that some convergent plate margins were actively spreading was developed by Dan Karig (1970) while a graduate student at the Scripps Institution of Oceanography.[9] This resulted from several marine geologic expeditions to the Western Pacific.