In personal computer microprocessor architecture, a back-side bus (BSB), or backside bus, is a computer bus used to connect the CPU to CPU cache memory, usually L2. If a design utilizes it along with a front-side bus (FSB), it is said to use a dual-bus architecture, or in Intel's terminology Dual Independent Bus (DIB)[1] architecture. 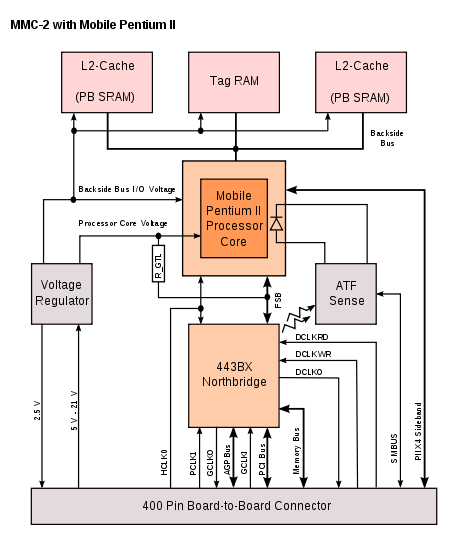 BSB is an improvement over the older practice of using a single system bus, because a single bus typically became a severe bottleneck as CPUs and memory speeds increased. Due to its dedicated nature, the back-side bus can be optimized for communication with cache, thus eliminating protocol overheads and additional signals that are required on a general-purpose bus. Furthermore, since a BSB operates over a shorter distance, it can typically operate at higher clock speeds, increasing the computer's overall performance.

Cache connected with a BSB was initially external to the microprocessor die, but now is usually on-die.[2] In the latter case, the BSB clock frequency is typically equal to the processor's,[3] and the back-side bus can also be made much wider (256-bit, 512-bit) than either off-chip or on-chip FSB.