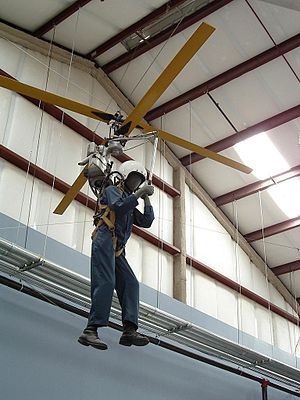 A backpack helicopter is a helicopter motor and rotor and controls assembly that can be strapped to a person's back, so that they can walk about on the ground wearing it, and can use it to fly. It uses a harness like a parachute harness and should have a strap between the legs (so that the pilot does not fall out of the harness during flight). Some designs may use a ducted fan design to increase upward thrust. Several inventors have tried to make backpack helicopters, with mixed results.

Typically, a backpack helicopter differs from a conventional helicopter in two main ways:

First, there is no tail rotor, and the main rotors are contra-rotating. Yaw is controlled by fine adjustment of a differential gear in the rotor drive transmission. When one rotor is adjusted to spin slightly faster than the other, it induces yaw (turning motion).

Second, the rotors are fixed pitch, which assists with simplicity; this means, however, that in the event of engine failure autorotation is impossible. Usually, a ballistic parachute would be incorporated for safety.

An edition of Popular Science magazine in 1969 featured a backpack helicopter that used small jet engines in a tip jet configuration instead of contra-rotating rotors. This design could function in autorotation. Related are devices like a backpack helicopter which also include a seat and leg supports, which are small, open-topped helicopters. In theory, a helicopter would be more efficient than a rocket-powered jetpack, possessing a greater specific impulse, and being more suited to hovering, due to the lower velocities of the propelled gases. 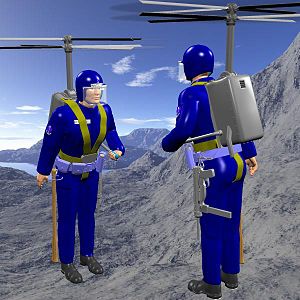 A possible design for a helibackpack with contra-rotating twin rotors

Backpack helicopters are a popular gadget in fiction. The SoloTrek XFV has appeared in spy films, such as the 2003 film Agent Cody Banks.

Several action figures come equipped with backpack helicopters. Such an accessory was released as part of the G.I. Joe toyline for any figure to use. The Annihilator figure had a helicopter back-pack as part of its accessories. Another vertical example is the Turbo-Copter unit for the popular Action Man toy figure.