Baffin Island (Inuktitut: ᕿᑭᖅᑖᓗᒃ, Qikiqtaaluk IPA: [qikiqtaːluk], French: Île de Baffin or Terre de Baffin, Old Norse: Helluland), in the Canadian territory of Nunavut, is the largest island in Canada and the fifth largest island in the world. Its area is 507,451 km2 (195,928 sq mi) and its population is about 11,000 (2007 estimate). Named after English explorer William Baffin,[2] it is likely that the island was known to Pre-Columbian Norse explorers from Greenland and Iceland and may be the location of Helluland, spoken of in the Icelandic sagas (the Grœnlendinga saga and the Saga of Erik the Red, Eiríks saga rauða). 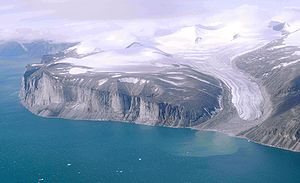 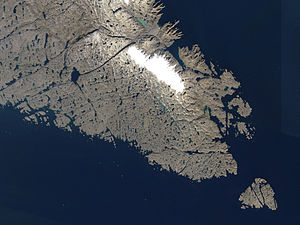 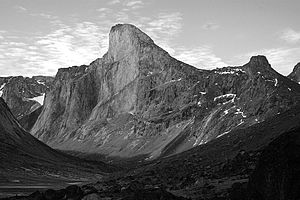 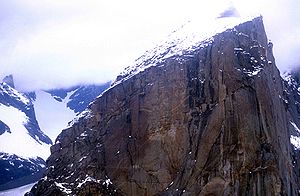 Iqaluit, the capital of Nunavut, is located on the southeastern coast. Until 1987, the town shared the name Frobisher Bay with the bay on which it is located.[3]

To the south lies Hudson Strait, separating Baffin Island from mainland Quebec.[4] South of the western end of the island is the Fury and Hecla Strait[5] which separates the island from the Melville Peninsula[6] on the mainland. To the east are Davis Strait[7] and Baffin Bay,[8] with Greenland beyond.[4] The Foxe Basin,[9] the Gulf of Boothia[10] and Lancaster Sound[11] separate Baffin Island from the rest of the archipelago to the west and north.

The Barnes Ice Cap, in the middle of the island, has been retreating since at least the early 1960s, when the Geographical Branch of the then-Department of Mines and Technical Surveys sent a three-man survey team to the area to measure isostatic rebound and cross-valley features of the Isortoq River.[citation needed] Conversely, in the 1970s parts of Baffin Island failed to have the usual ice-free period in the summer.[18]

The island has been continuously inhabited by Inuit peoples for thousands of years. In September 2008, Nunatsiaq News reported that a team led by Dr. Patricia Sutherland had found archaeological remains of yarn, rats, tally sticks, a carved wooden Dorset culture face mask depicting Caucasian features, and possible architectural remains, which indicated that European traders and possibly settlers had been on Baffin Island not later than AD 1000.[19] What the source of this Old World contact may have been is unclear; the report states: "Dating of some yarn and other artifacts, presumed to be left by Vikings on Baffin Island, have produced an age that predates the Vikings by several hundred years. So [...] you have to consider the possibility that as remote as it may seem, these finds may represent evidence of contact with Europeans prior to the Vikings' arrival in Greenland".[19] Dr Sutherland's research eventually led to a 2012 announcement that whetstones had been found with remnants of alloys indicative of Viking presence.[20] The archaeological site at Nanook is thought to be a trading post and port, and thus Baffin Island would be Helluland.[21]

Baffin Island is part of the Qikiqtaaluk Region. 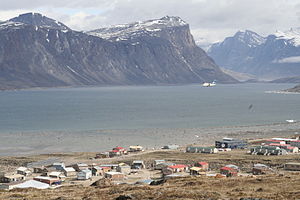 There are discussions to start the Baffinland Iron Mine, an iron ore mine with a 21-year life, at Mary River, and to build a railway and a port to transport the ore.[23] This may create a temporary mining community there. 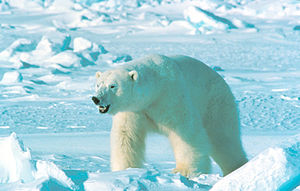 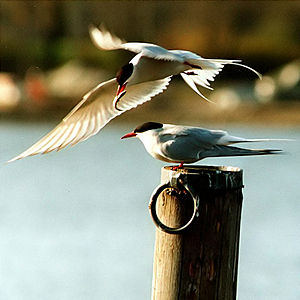 Barren-ground caribou herds that migrate in a limited range from northern Baffin island down to the southern part in winter, even to the Frobisher Bay peninsula, next to Resolution Island and migrate back north in the summer.[citation needed] In 2012, a survey of caribou herds found that the local population was only about 5000, a decrease of as much as 95% from the 1990s.[24]

Polar bears can be found all along the coast of Baffin Island, but are most prevalent where the sea ice takes the form of pack ice, where their major food sources — ringed seals (jar seal) and bearded seals — live. Polar bears mate approximately every year with from one to three cubs being born around March. Female polar bears may travel 10–20 km (6–12 mi) inland to find a large snow bank where they dig a den in which to spend the winter and later for giving birth. The polar bear population here is one of 19 genetically distinct demes of the circumpolar region.[25]

Arctic fox can usually be found where polar bears venture on the fast ice close to land in their search for seals. Arctic foxes are scavengers, and often follow polar bears to get their leavings. On Baffin Island, Arctic foxes are sometimes trapped by Inuit, but there is not a robust fur industry.[citation needed]

Arctic hare are found throughout Baffin island. Their fur is pure white in winter and molts to a scruffy dark grey in summer. Arctic hares and lemmings are a primary food source for Arctic foxes and Arctic wolves.[citation needed]

Lemmings are also found throughout the island, and are a major food source for Arctic foxes, Arctic wolves and the snowy owl. In the winter, lemmings dig complicated tunnel systems through the snow drifts in order to get to their food supply of dry grasses and lichens.[citation needed]

The Arctic wolf, and the Baffin Island wolf, a gray wolf subspecies, is also a year-round resident of Baffin Island. Unlike the gray wolf in southern climes, Arctic wolves often do not hunt in packs, although a male-female pair may hunt together.[citation needed]

In the water (or under the ice) the year-round visitors are mainly the ringed seal.[citation needed]

The ringed seal lives off-shore within 8 km (5 mi) of land. During the winter, it makes a number of breathing holes through ice up to 8 ft (2.4 m) thick by visiting each one often, and keeping the hole open and free from ice. In March, when a female is ready to whelp, she will enlarge one of the breathing holes that has snow over it, and create a small "igloo" where they whelp one or two pups. Within three weeks the pups are in the water and swimming. During the summer, ringed seals keep to a narrow territory approximately 3 km (2 mi) along the shoreline. If pack ice moves in, they may venture out 4–10 km (2–6 mi) and follow the pack ice, dragging themselves up on an ice floe to take advantage of the sun.[citation needed] 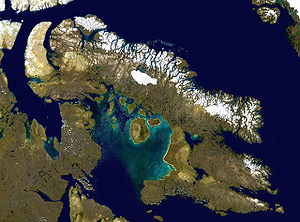 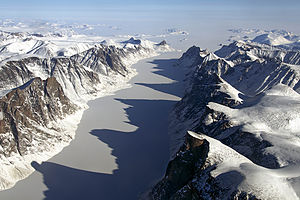 An ice-covered fjord on Baffin Island, with Davis Strait in the background.

Long-range travellers include the Arctic tern, which migrates from Antarctica every spring. The variety of water birds that nest here include coots, loons, mallards, and many other duck species.[citation needed]

Water species that visit Baffin Island in the summer are:

Harp seals (or saddle-backed seals), which migrate from major breeding grounds off the coast of Labrador and the southeast coast of Greenland to Baffin Island for the summer.[26] Migrating at speeds of 15–20 kilometres per hour (9–12 mph), they all come up to breathe at the same time, then dive and swim up to 1–2 km (0.62–1.24 mi) before surfacing again. They migrate in large pods consisting of a hundred or more seals, to within 1–8 km (0.62–4.97 mi) of the shoreline, which they then follow, feeding on crustaceans and fish.[citation needed]

Walrus, which actually do not migrate far off land in the winter. They merely follow the "fast ice", or ice that is solidly attached to land, and stay ahead of it as the ice hardens further and further out to sea. As winter progresses, they will always remain where there is open water free of ice. When the ice melts, they move in to land and can be found basking on rocks close to shore. One of the largest walrus herds can be found in the Foxe Basin on the western side of Baffin Island.[citation needed]

Beluga or white whales migrate along the coast of Baffin Island as some head north to the feeding grounds in the Davis Strait between Greenland and Baffin Island, or into the Hudson Strait or any of the bays and estuaries in between. Usually travelling in pods of two or more, they can often be found very close to shore (100 m (330 ft), or less), where they come up to breathe every 30 seconds or so as they make their way along the coastline eating crustaceans.

Narwhals, which are known for their long, spiralling single tusk (males only), can also be found along the coast of Baffin Island in the summer. Much like their beluga cousins they may be found in pairs or even in a large pod of ten or more males, females and newborns. They also can be often found close to the shoreline, gracefully pointing their tusks skyward as they come up for air. When they first arrive, the males arrive a few weeks ahead of the females and young.[citation needed] 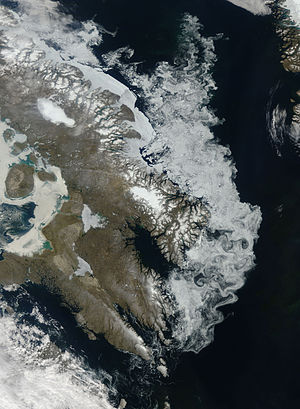 Baffin Island lies in the path of a generally northerly airflow all year round, so, like much of northeastern Canada, it has an extremely cold climate. This brings very long, cold winters and foggy, cloudy summers, which have helped to add to the remoteness of the island. Spring thaw arrives much later than normal for a position straddling the Arctic Circle; around early June at Iqaluit in the south-east to early/mid-July on the north coast where glaciers run right down to sea level. Snow, even heavy snow, can occur at any time of the year, although it is least likely in July and early August. Average annual temperatures at Iqaluit are around −9.5 °C (14.9 °F), compared with Reykjavík,[maps 10] around 5 °C (41 °F), which is at a similar latitude.[27]

Sea ice surrounds the island for most of the year, and only disappears completely from the north coast for short unpredictable periods from mid- to late June until the end of September.[citation needed]

Most of Baffin Island lies above the Arctic Circle and all the communities from Pangnirtung northwards have polar night in winter and the midnight sun in summer. The eastern community of Clyde River has twilight instead of night from April 26 until May 13, continuous sunlight for 2½ months from May 14 to July 28, then twilight instead of night from July 29 until August 16. This gives the community just over 3½ months without true night. In the winter the sun sets on November 22 and does not rise again until January 19 of the next year. However, there is twilight for at least 4 hours a day, unlike places such as Eureka.[citation needed]