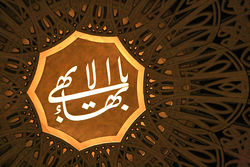 Calligraphy of the Greatest Name

Bahá'í symbols are symbols that have been used, or are used, to express identification with the Bahá'í Faith. While the five-pointed star is the symbol of the religion,[1] being used to represent the human body and Messengers of God, more common symbols include the nine-pointed star, the Greatest Name, and the Ringstone symbol, representing perfection, and the Messengers of God.

An unidentified tablet in the Báb's handwriting.

An unidentified tablet in the Báb's handwriting.

The five-pointed star, or haykal (Arabic: temple‎‎) is the symbol of the Bahá'í Faith as mentioned by Shoghi Effendi, head of the Bahá'í Faith in the first half of the 20th century: "Strictly speaking the 5-pointed star is the symbol of our Faith, as used by the Báb and explained by Him."[1] The five-pointed star has been used as the outline of special letters or tablets by both the Báb and Bahá'u'lláh.[2]

Haykal is a loan word from the Hebrew word hēyḵāl, which means temple and specifically Solomon's Temple in Jerusalem. In Arabic, the word also means the body or form of something, particularly the human body.[3] In the Bahá'í tradition, the haykal was established by the Báb — the person who told of Bahá'u'lláh's coming — who represented the haykal as a five-pointed star representing the human body as a head, two hands, and two feet.[3][4] The Báb wrote many letters, tablets, prayers and more in the shape of a five-pointed star, including some that included many derivatives of the word Bahá’ (see below).[2][5]

In Bahá'u'lláh's writings, specifically the Súriy-i-Haykal (Tablet of the Temple), while the meaning of temple remains present, the haykal is used mainly to mean the human body, but particularly the body of the Manifestation of God — a messenger from God — and the person of Bahá'u'lláh himself.[3] In the Tablet, the haykal is also used to refer to the word of God, which is revealed by the Manifestations of God.[6] He also says in the same Tablet:

"O Living Temple! We have, in very truth,...ordained Thee to be the emblem of My Cause betwixt the heavens and the earth..."[7]

In Islamic belief God has 99 names, and in some Islamic traditions it is believed that there is a special hidden 100th name, which is the greatest.[8] In Bahá'í belief the Greatest Name is Bahá’ (بهاء), translated as "glory" or "splendour".[8] Many symbols of the Bahá'í Faith derive their significance from the word Bahá’, and it is the root word used in many other names and phrases including Bahá'í (a follower of Bahá'), Bahá'u'lláh (Glory of God), `Abdu'l-Bahá (Servant of Glory), Yá Bahá'u'l-Abhá (O Thou Glory of the Most Glorious), and Alláh-u-Abhá (God is Most Glorious).

Calligraphy of the Greatest Name

Bahá'u'lláh often referred to Bahá'ís in his writings as "the people of Bahá’", and in addition, the Báb sent a tablet to Bahá'u'lláh with 360 derivatives of the word Bahá’.[2][9] Along with daily prayers, Bahá'ís are encouraged to recite the phrase "Alláh-u-Abhá" 95 times in a form of meditation.[10] 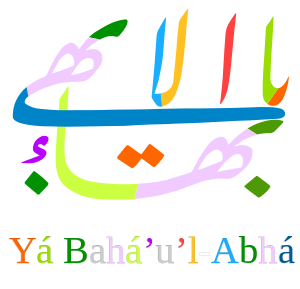 Arabic letters in the Greatest Name

The symbol known as Greatest Name is an Arabic calligraphic rendering of "Yá Bahá'u'l-Abhá" (يا بهاء الأبهى usually translated as "O Thou the Glory of the Most Glorious!"). This rendering was originally drawn by the early Bahá'í calligrapher Mishkín Qalam,[8] and later adopted by Bahá'ís everywhere.

Since the symbol refers more directly to the Name of God and of the Messenger of God, than any other symbol in the Bahá'í Faith, it is not generally used in a casual manner or to adorn the personal artifacts that are put to common use.[11] The symbol can usually be seen in Bahá'í homes and rings that are produced on a limited scale.[11]

According to the Abjad system of Isopsephy, the word Bahá' has a numerical equivalence of 9, and thus there is frequent use of the number 9 in Bahá'í symbols.[8] The most commonly used symbol connected to the number 9 is the nine-pointed star; there is no particular design of the nine-pointed star that is used more often than others. While the star is not a part of the teachings of the Bahá'í Faith, it is commonly used as an emblem representing "9", because of the association of number 9 with perfection, unity and Bahá’.

The number 9 also comes up several times in Bahá'í history and teachings. On the significance of the number 9, Shoghi Effendi wrote:

"Concerning the number nine: the Bahá'ís reverence this for two reasons, first because it is considered by those interested in numbers as the sign of perfection. The second consideration, which is the more important one, is that it is the numerical value of the word "Bahá’"…
"Besides these two significances the number nine has no other meaning. It is, however, enough to make the Bahá'ís use it when an arbitrary number is to be chosen."[12]

Its use on gravestone markers was approved by Shoghi Effendi, then head of the religion, in 1944.[13]

The ringstone symbol was designed by `Abdu'l-Bahá, Bahá'u'lláh's son and successor, and as its name implies, is the most common symbol found on rings worn by Bahá'ís, but it is also used on necklaces, book covers, and paintings. It consists of two stars (haykal) interspersed with a stylized Bahá’. The lower line is said to represent humanity and the world of creation, the upper line the world of God, and the middle line represents the special station of Manifestation of God and the world of revelation; the vertical line is the Primal Will or Holy Spirit proceeding from God through the Manifestations to humanity.[14] The position of Manifestation of God in this symbol is said to be the linking point to God. The two stars or haykals represent Bahá'u'lláh and the Báb.[15]