From Infogalactic: the planetary knowledge core
(Redirected from Baisakhi)
Jump to: navigation, search
Not to be confused with Vesak.

The day represents around 21 March but the day is marked on 13 or 14 April due to changes in the calendar.[1]

The festival is especially important for the Sikh community as it marks the establishment of the Khalsa which is also termed Khalsa Sirjana Divas [2] and falls on the first day of Vaisakh which is the second month of the Nanakshahi calendar.

In other cases, Vaisakhi falls on Mesha Sankranti (the first of the solar month of Vaisakha) which marks the start of the solar new year across many parts of the sub-continent using luni-solar calendars and is important for Hindus. In regions where the regional new year begins with the start of the lunar new year,[3] Mesha Sankranti is also considered to be an important day.

The festival also coincides with other new year festivals celebrated on the first day of Vaisakh, in some regions of the Indian Subcontinent such as Pohela Boishakh the Bengali New Year, Bohag Bihu of Assam or Puthandu, the Tamil New Year. 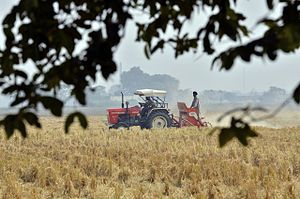 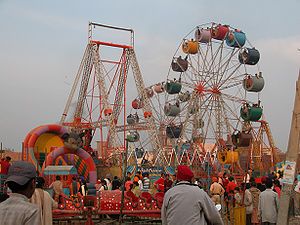 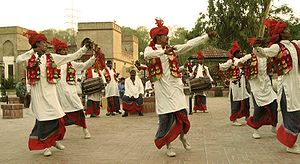 Vaisakhi is a Punjabi harvest festival for people of the Punjab region.[4] This day is also observed as a thanksgiving day by farmers whereby farmers pay their tribute, thanking God for the abundant harvest and also praying for future prosperity.

A tradition associated with harvesting is Aawat pauni which involves people getting together to harvest the wheat. Drums are played whilst people work. At the end of the day, people sing dohay to the tunes of the drum.[5]

An example of a Punjabi doha (couplet) is:

The harvest festival is also characterised by the folk dance Bhangra which traditionally is a harvest dance.

Vaisakhi is observed as a harvest festival in Punjab, Pakistan and the local new year irrespective of faith.[7] Vaisakhi fairs are traditionally held in various places including Lahore.[8]

Fairs are held in many parts of Punjab, India to mark the new year and the harvesting season.

Fairs are held to celebrate Vaisakhi in Haryana. Haryana Tourism organise a Vaisakhi mela in the Pinjore complex near Chandigarh.[10]

Vaisakhi fairs are held in many places of Himachal Pradesh including Rewalsar, Shimla, Mandi and Prashar Lakes.[11] 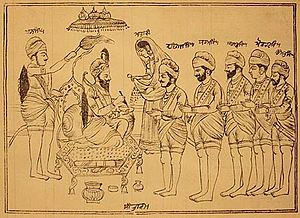 Vaisakhi is one of the three festivals chosen by Guru Amar Das to be celebrated by Sikhs (the others being Maghi and Diwali[12] which later gave rise to the festival of Bandi Chor Divas during the times of the sixth Guru Hargobind Sahib Ji).

The festival bears a great significance for Sikhs because on the Vaisakhi Day in the year 1699, the 10th Guru of the Sikhs, Guru Gobind Singh laid down the foundation of the Panth Khalsa, that is the Order of the Pure Ones giving rise to the festival of Khalsa Sirjana Divas. It is also used as a celebration for those accepting the five Ks.

To mark the celebrations, Sikh devotees generally attend the Gurdwara before dawn with flowers and offerings in hands. Processions through towns are also common.

Vaisakhi/Khalsa Sirjana Divas is celebrated on the first day of the second month of Vaisakh according to the Nanakshahi calendar.The festival is usually celebrated on 13 April,[13] and occasionally on 14 April, across many parts of the world. Although the official Sikh new year is observed on the first day of the Nanakshahi month of Chait, as the Khalsa was formed on Vaisakhi, the festival is also considered as the Khalsa new year[14] with the era starting in 1699 A.D.

The main celebration takes place at Talwandi Sabo (where Guru Gobind Singh stayed for nine months and completed the recompilation of the Guru Granth Sahib),[15] and in the Gurudwara at Anandpur Sahib (see picture above), the birthplace of the Khalsa and at the Golden Temple in Amritsar.

Vaisakhi is widely celebrated by Sikhs in Western Punjab (Pakistan) as well, with festivities centered on the Panja Sahib complex in Hasan Abdal, numerous Gurudwaras in Nankana Sahib, and in various historical sites in Lahore.[16] It is culturally and traditionally regarded as an important and significant Punjabi festival, further exemplified by the thousands of Sikh pilgrims from around the world arriving each year to commemorate the day at the sacred Sikh sites of Nankana Sahib and Hasan Abdal.[17] 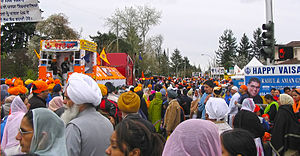 Vaisakhi parade in Surrey, BC, Canada 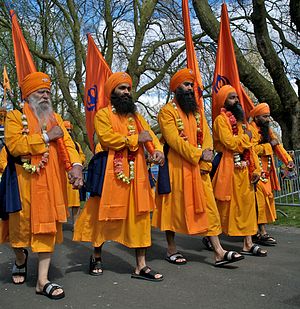 In the United States, there is usually a parade commemorating the Vaisakhi celebration. In Manhattan, New York City[18] people come out to do "Seva" (selfless service) such as giving out free food, and completing any other labor that needs to be done. In Los Angeles, California, the local Sikh community consisting of many Gurdwaras[19] holds a full day Kirtan (spiritual music) program followed by a parade. The local Sikh community in Vancouver, Abbotsford and Surrey, British Columbia, Canada holds its annual Vaisakhi celebrations in April,[20] which often includes a Nagar Kirtan (parade) with the parade is Surrey involving 200,000 people in 2014.[21]

The United Kingdom has a large Sikh community originating from the Indian sub-continent, East Africa[22] and Afghanistan. The largest concentrations of Sikhs in the UK are to be found in the West Midlands (especially Birmingham and Wolverhampton) and London.[23] The Southall Nagar Kirtan is held on a Sunday a week or two before Vaisakhi. The Birmingham Nagar Kirtan is held in late April in association with Birmingham City Council,[24] and it is an annual event attracting thousands of people which commences with two separate nagar kirtans setting off from gurdwaras in the city and culminating in the Vaisakhi Mela at Handsworth Park.[25] 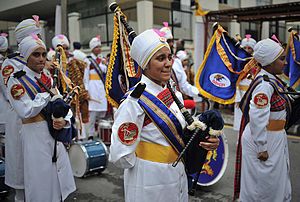 A band performs at Vaisakhi day celebrations in Kuala Lumpur (2013).

The Sikh community is a minority in Malaysia, which is why Vaisakhi is not a public holiday. However, in line with the government's efforts to promote integration among the country's different ethnic and religious groups, the prime minister, Najib Razak has announced that beginning 2013, all government servants from the Sikh community will be given a day off on Vaisakhi Day.[26] Vaisakhi 'open houses' are also held across the country during the day of the festival, or the closest weekend to it.

Spelling of Vaisakhi in Punjabi

However, in the Doabi and Malwai dialects of Punjabi, it is common for speakers to substitute a "B" for a "V".[28] Therefore, the spelling used is dependent on the dialect of the writer.

The first day of Vaisakh is celebrated as Mesha Sankranti which marks the solar new year[29] and is celebrated by Hindus by bathing in sacred rivers.[30] Mesha Sankranti is also referred to as Baisakhi but this event is distinct from the regional festival of Vaisakhi and is related to the marking of the start of the solar new year by people of the Punjab region and other regions of the sub-continent.[31]

Many Hindus travel to Haridwar to take a dip in the Ganges on Mesha Sankranti which is also called Vaisakha Sankranti.[32] In Himachal Pradesh, the Hindu Goddess Jwalamukhi is worshipped on the day.

In other regions of the Indian Subcontinent

The first day of Vaisakh marks the solar new year[33] but is not considered to be a New Year across India but only in some regions. Therefore, Vaisakhi coincides with the New Year's Day (according to the solar new year) celebrated by people across the Tamil Nadu, Assam Valley, Kerala, Odisha, West Bengal, the Kumaon region of Uttrakhand and Mithila region of Bihar (where the Sun-god Surya is honoured).[33] It is also celebrated outside India in Nepal and Sri Lanka.

Vaisakhi almost coincides with the festival of 'Vishu' celebrated in Kerala a day after Vaisakhi. The festivities include fireworks, shopping for new clothes and interesting displays called 'Vishu Kani'. These are arrangements of flowers, grains, fruits, cloth, gold, and money are viewed early in the morning, to ensure a year of prosperity. The other festival Vaisakhi almost coincides with is Bohag Bihu which is celebrated in Assam a day after Vaisakhi where the community organizes massive feasts, music, and dancing.

Names of festivals by region

The following is a list of new year festivals: