The Khan's Palace or Hansaray is located in the town of Bakhchysarai, Crimea. It was built in the 16th century and became home to a succession of Crimean Khans. The walled enclosure contains a mosque, a harem, a cemetery, living quarters and gardens. The palace interior has been decorated to appear lived in and reflects the traditional 16th-century Crimean Tatar style. It is one of the Muslim palaces found in Europe, the most well-known others are Topkapı Palace, Dolmabahçe Palace, Yıldız Palace, Aynalıkavak Palace, Edirne Palace, Çırağan Palace in Turkey and the Alhambra in Spain.

The city of Bakhchisaray and the palace were commissioned by the Crimean Khan dynasty, who moved their capital here from Salaçıq in the first half of the 16th century. The palace's complex design and minarets were constructed in the 16th century by Ottoman, Persian and Italian architects. Later damages required partial reconstruction, but the structure still has a resemblance to its original form. Some buildings currently in the palace were attached later, while some of the original buildings could not stand past the 18th century.[1]

One courtyard contains a small fountain whose sad story so moved the Russian writer Alexander Pushkin when he visited it that he wrote a long narrative poem titled "The Fountain of Bakhchisaray". 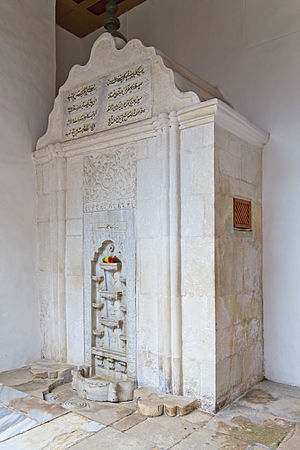 Bakhchisaray Fountain or Fountain of Tears is a real case of life imitating art. The fountain is known as the embodiment of love of one of the last Crimean Khans, Qırım Giray Khan for his young wife, and his grief after her early death. The Khan was said to have fallen in love with this Polish girl in his harem. Despite his battle-hardened harshness, he was grievous and wept when she died, astonishing all those who knew him. He commissioned a marble fountain to be made, so that the rock would weep, like him, forever.[2]

Originally placed by the young woman's tomb in a restful garden, the fountain was transferred to its current location in the Ambassadors' courtyard after Catherine II ordered the annexation of the Crimean territory. Pushkin's verses are credited in part for ensuring the survival of the palace itself to date. 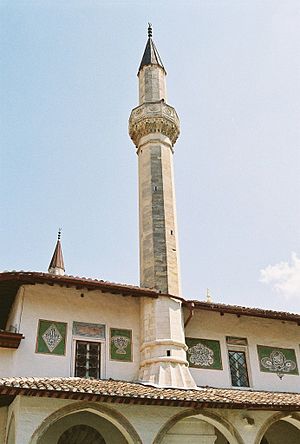 The Big Khan Mosque (Crimean Tatar: Büyük Han Cami) is located on the Palace Square to the east of the northern gate. It is one of the largest mosques in the Crimea and one of the first buildings of the Khan's palace. The mosque was built in 1532 by Sahib I Giray and bore his name in the 17th century.

The mosque consists of a three-aisle square prayer hall covered with a hipped roof, a narthex and porticos facing east and west. Two symmetrical octagonal minarets rise through the porticos; they are twenty-eight meters high and have conical caps and finials. A domed ablution kiosk of square shape is attached to the northeastern corner of the mosque. It is believed that a madrasah built by Khan Arslan Giray in 1750 used to adjoin the eastern wall. The mosque is entered from a portal facing north. Inside, a balcony is attached to three of the four walls, part of which is sectioned off for the Khan's lodge. Scholars argue that the mosque was originally roofed with domes of various sizes.[3]

In 1736 the mosque was damaged by fire and later restored during the reign of Khan Selameta Giray.

The Small Khan Mosque (Crimean Tatar: Kiçik Han Cami) is located in the main building and was designed for members of the Khan's family and important dignitaries. Construction of the small mosque dates back to the 16th century, and paintings in the mosque are from the 17th and 18th centuries 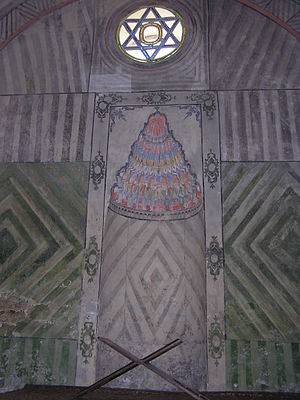 Mihrab in the Small Mosque

In the south wall is the mihrab, the upper part of which is cut seven ornamented belts, symbolizing the seven levels of heaven. Above the mihrab is a stained glass window, which shows the seal of Suleiman (hexagram). On the walls of the small mosque are scratched images of boats with sails, horses and horsemen.