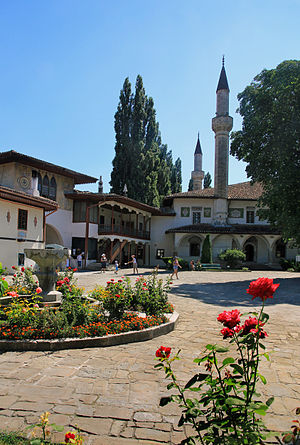 Bakhchysarai (Ukrainian: Бахчисарáй; Crimean Tatar: Bağçasaray; Russian: Бахчисарáй; Turkish: Bahçesaray; Persian: باغچه سرای‎‎) is a city in central Crimea, a territory recognized by a majority of countries as part of Ukraine and incorporated by Russia as the Republic of Crimea. It is the administrative center of the Bakhchysarai Raion (district), as well as the former capital of the Crimean Khanate. Its main landmark is Hansaray, the only extant palace of the Crimean Khans, currently opened to tourists as a museum. Population: 27,448 (2014 Census).[2] 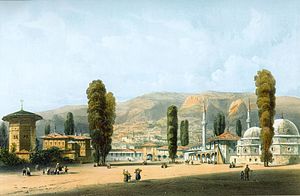 Located in a narrow valley of the Çürük Suv river, the first artifacts of human presence in the valley date from the Mesolithic period. Settlements existed in the valley since Late Antiquity. The founding of Bakhchisaray was preceded by the Qırq Yer fortress (modern Çufut Qale), Salaçıq, and Eski Yurt — these are incorporated into the urban area of modern Bakhchisaray.

Russian speakers associate the town with the Romantic connotations of Alexander Pushkin's poem The Fountain of Bakhchisaray (1822). Adam Mickiewicz dedicated some of the finest poems in his Crimean Sonnets (1825) to the landmarks of Bakhchisaray.

An asteroid, 3242 Bakhchisaraj, discovered by Soviet astronomer Nikolai Stepanovich Chernykh in 1979, takes its name after the town.[3]

Famous attractions within or near Bakhchysarai are:

There is a network of well marked hiking trails around the town. All the main attractions are connected with red-marked trail.

Since 2011 thanks to the support of the Czech Government and USAID the Tourist information centre has been working.