Bakhmut (Ukrainian: Бахмут), formerly called Artemivsk (Ukrainian: Артемівськ), is a city of an oblast significance in Donetsk Oblast, Ukraine. It serves as the administrative center of Artemivsk Raion though it does not belong to the raion. It is located on the Bahmutka River about 89 km away from the administrative center of the Donetsk Oblast, Donetsk. Population: 77,620 (2013 est.)[1]. 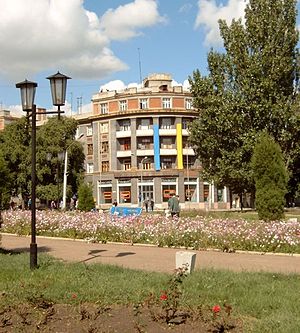 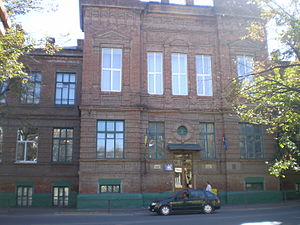 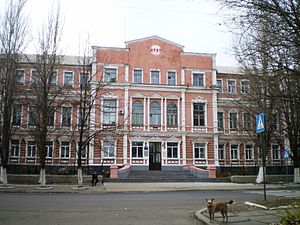 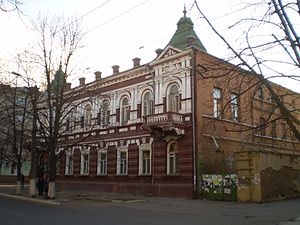 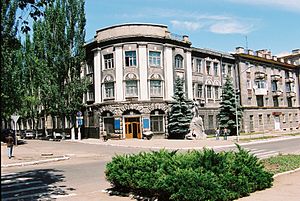 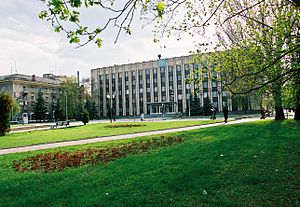 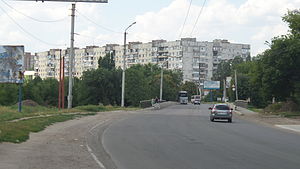 There is evidence of prior settlement in 1556. However, officially it was founded in 1571 and named as Bahmut fort after the river Bakhmutka (a tributary of the Seversky Donets) on which it is situated. The settlement initially began as a border point and was later turned into a fortification. The name derived from Tatar name Mahmud or Mahmet. In 1701, Peter I ordered to build a fort and rename the town from Bahmut to Bakhmut. The fort was completed in 1703. In 1704 Peter the Great issued a ukase permitting Cossacks to settle in Bakhmut.

In the autumn of 1705, a detachment of Cossacks headed by Ataman Kondraty Bulavin captured the Bakhmut salt mines,[2] which later caused the town to be one of the centers of the Bulavin Rebellion, and held the city until March 7, 1708 when it was seized by government troops. From 1708 to April 22, 1725, Bakhmut is situated in the Azov Governorate, and on May 29, 1719 becomes the administrative center of the Bakhmut province within the governorate.[3] From 1753 to 1764, it was a main city of the Slavo-Serbia territory created by Imperial Russia on Ukrainian land and inhabited by colonists from Serbia and elsewhere.

In 1783, Bakhmut received city status within the Yekaterinoslav province (Novorossiysk Governorate).[4] During this time, in the city, there were 49 houses, five brick, candle, and soap factories. The city had about 150 shops, a hospital, and three schools: two private boarding schools for children of wealthy parents, and a Sunday school for children of workers. Bakhmut had a large shopping center. There twice a year, on July 12 (Day of the Apostles Peter and Paul) and September 21 (Day of the Nativity of the Blessed Virgin Mary), big fairs were conducted. The city's annual turnover was about 1 million rubles. On August 2, 1811, the city emblem was approved. In 1875, a water-system was installed.

On January 25, 1851, the city became a municipality, with Vasily I. Pershin as mayor. In 1876, within the Bakhmut Basin were discovered large deposits of rock salt, which was followed by a rapid increase in the numbers of mines, with salt productions reaching 12% nationwide. After the construction of a rail route Kharkov-Bakhmut-Popasnaya, there was enterprise for the production of alabaster, plaster, brick, tile, and soda. At the beginning of the twentieth century, the city developed metal-working. By 1900, the city had 76 small industrial enterprises, which employed 1,078 workers, as well as four salt mines, which employed 874 workers. In 1900, the streets became paved. By 1913, the population consisted of 28,000 people. There were two hospitals with 210 beds, four secondary and two vocational schools, six single-class schools, four parish schools, and a private library.

On December 27, 1919, Soviet power is established within the city. In 1923, there were 36 enterprises, including a factory "Victory of Labor" (a former nail-spike factory), a factory "Lightning" that produced castings for agriculture, as well as brick, tile, and alabaster factories; mines "Karl Liebknecht and Sverdlov", "Shevchenko", and "Bakhmut salt"; and a shoe factory. From April 16, 1920 to August 1, 1925, Bakhmut is the administrative center of the Donetsk province.

In 1924 the city's name was changed from Bakhmut to Artemivsk, in honour of Artem, a Russian Bolshevik (Communist) revolutionary figure who lived and worked in the city in the early years of the revolution. In 1938, Moskalenko is the First Secretary of the Municipal Committee of the CPU. In 1941, Vasily Panteleevich Prokopenko is First Secretary of the City Committee of the Communist Party. From October 31, 1941 to May 9, 1943, German troops occupy Artemivsk under the command of Von Zobel. Under occupation in 1941, Nikolai Mikhailovich Zhorov is Secretary of the underground City Party Committee.

During the 2014 pro-Russian conflict in Ukraine the town was captured Mid-April 2014 by pro-Russian separatists.[6][7] The city was eventually retaken by Ukrainian forces on 7 July 2014, along with Druzhkivka.[8][9]

On 15 May 2015 President of Ukraine Petro Poroshenko signed a bill into law that started a six months period for the removal of communist monuments and the mandatory renaming of settlements with a name related to Communism.[10]

According to the Ukrainian Census of 2001, the majority of residents are ethnic Ukrainians and speak Russian as a first language:[12][13]

Since 1951, the European Artyomovsk Winery is located in the city. The Artyomsol salt mine is located in the suburb of Soledar, which contains the world's largest underground room. It is large enough that a hot air balloon has been floated inside, symphonies have been played before, and two professional soccer matches have been held at the same time. It is large enough to fit Notre Dame inside with room to spare.

The highways of Kharkiv-Rostov and Donetsk-Kiev run through Artemivsk. The towns of Chasiv Yar and Soledar are included in the Artemivsk municipality. The city has a public transport system consisting of a network of trolleybuses and buses.