Baldwin County is a county of the U.S. state of Alabama. As of the 2010 census, the population was 182,265.[2] The county seat is Bay Minette. The county is named in honor of Senator Abraham Baldwin, though he never lived in what is now Alabama.

It is the largest county in Alabama by area and is located on the eastern side of Mobile Bay.

Baldwin County was established on December 21, 1809,[1] ten years before Alabama became a state. Previously, the county had been a part of the Mississippi Territory until 1817, when the area was included in the separate Alabama Territory. Statehood was gained by Alabama in 1819.[3]

There have been numerous border changes to the county as population grew and other counties were formed. Numerous armies have invaded during the Revolutionary War, War of 1812, and Civil War.[4]

To achieve the relocation, the men of Bay Minette devised a scheme. They fabricated a murder to lure the Sheriff and his deputy out of the Daphne. While the law was chasing down the fictitious killer during the late hours, the group of Bay Minette men stealthily traveled the seventeen miles (27 km) to Daphne, stole the Baldwin County Courthouse records, and delivered them to the city of Bay Minette, where Baldwin County's county seat remains. A New Deal mural, completed by WPA artists during the Great Depression, depicts the events. It hangs in the Bay Minette United States post office .[5] 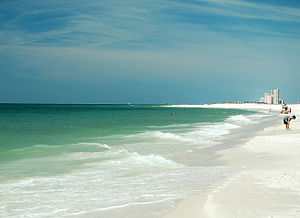 Two separate areas in Baldwin County have been designated as "Outstanding Alabama Water" by the Alabama Environmental Management Commission, which oversees the Alabama Department of Environmental Management. As of April 2007, only two other areas in Alabama have received what is the "highest environmental status" in the state. A portion of Wolf Bay and 42 miles (68 km) of the Tensaw River in northern Baldwin County have received the designation. Officials believe the "pristine water" will become an important eco-tourism destination.[12]

There are numerous private airports and heliports in Baldwin County. Considerable military airspace overlies much of the county and adjacent bay and coastal waters.

The Baldwin County Board of Education oversees most public education in the county. Numerous private and parochial schools also serve the area.

The county is governed by a four-member county commission, elected from single-member districts. A sheriff, coroner, and revenue commissioner are elected in at-large positions countywide. The sheriff of Baldwin County is Hoss Mack (R)[19] 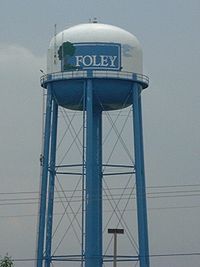 The water tower in central Foley.