From Infogalactic: the planetary knowledge core
Jump to: navigation, search
This article is about the scale for measuring shoreline exposure. For other uses of Ballantine, see Ballantine (disambiguation). 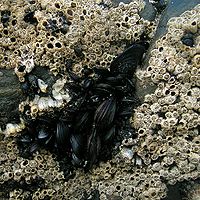 Semibalanus balanoides, the barnacle, Ballantine's main indicator of a medium exposure in the mid-littoral zone.

The Ballantine scale is a biologically defined scale for measuring the degree of exposure level of wave action on a rocky shore. Devised in 1961 by W. J. Ballantine, then at the zoology department of Queen Mary College, London, the scale is based on the observation that where shoreline species are concerned "Different species growing on rocky shores require different degrees of protection from certain aspects of the physical environment, of which wave action is often the most important." The species present in the littoral zone therefore indicate the degree of the shore's exposure.[1]

An abbreviated summary of the scale is given below. The scale runs from 1) an "extremely exposed" shore, to 8) an "extremely sheltered" shore. The littoral zone generally is the zone between low and high tides. The supra-littoral is above the barnacle line.

Modifications to the scale

A modified exposure scale of five stages applying to the shores of the British Isles is given by Lewis (1964):[2]