From Infogalactic: the planetary knowledge core
(Redirected from Ballets)
Jump to: navigation, search
This article is about the dance form. For other uses, see Ballet (disambiguation). 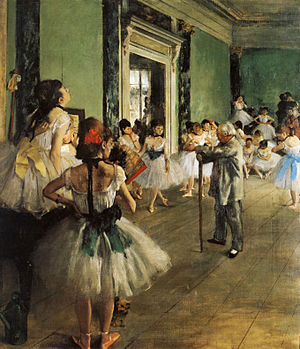 Classical bell tutus in The Dance Class by Degas, 1874

Ballet /ˈbæleɪ/ (French: [balɛ]) is a type of performance dance that originated in the Italian Renaissance courts of the 15th century and later developed into a concert dance form in France and Russia. It has since become a widespread, highly technical form of dance with its own vocabulary based on French terminology. It has been globally influential and has defined the foundational techniques used in many other dance genres. Becoming a ballet dancer requires years of training to learn and master, and much practice to retain proficiency. It has been taught in ballet schools around the world, which have historically incorporated their own cultures to evolve the art.

Ballet may also refer to a ballet dance work, which consists of the choreography and music for a ballet production. A well-known example of this is The Nutcracker, a two-act ballet that was originally choreographed by Marius Petipa and Lev Ivanov with a music score by Pyotr Ilyich Tchaikovsky. Ballet dance works are choreographed and performed by trained artists. Many classical ballet works are performed with classical music accompaniment and are theatrical and use elaborate costumes and staging, though there are exceptions to this, such as neoclassical works by George Balanchine.

Ballet is a French word which had its origin in Italian balletto, a diminutive of ballo (dance) which comes from Latin ballo, ballare, meaning "to dance",[1][2] which in turn comes from the Greek "βαλλίζω" (ballizo), "to dance, to jump about".[2][3] The word came into English useage from the French around 1630.

Main articles: History of ballet and Timeline of ballet 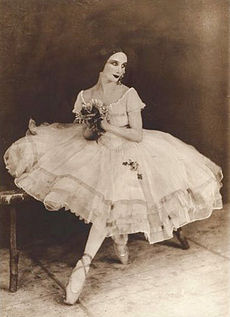 Ballet began in the Italian Renaissance courts of the fifteenth and sixteenth centuries[citation needed]. However, the foundation of classical ballet as it is known today began under Louis XIV, and this origin is reflected in the use of the French language in the vocabulary of ballet. In 1661 Louis founded the Académie Royale de Danse (Royal Dance Academy) to establish standards and certify dance instructors. In 1672, Louis XIV made Lully the director of the Académie Royale de Musique (Paris Opera) from which the first professional ballet company, the Paris Opera Ballet, arose.[4]

Ballet went into decline in France after 1830, though it continued to develop in Denmark, Italy, and Russia. The arrival in Europe on the eve of First World War of the Ballets Russes of Sergei Diaghilev, revived interest in the ballet and started the modern era.

In the 20th century, ballet had a strong influence on other dance genres, and sub-genres of ballet have also evolved. In the United States, choreographer George Balanchine developed what is now known as neoclassical ballet. Other developments include contemporary ballet and post-structural ballet. Also in the twentieth century, ballet took a turn dividing it[clarification needed] from classical ballet to the introduction of modern dance, leading to modernist movements[clarification needed] in several countries.[5]

Stylistic variations have emerged and evolved since the Italian Renaissance. Early, classical variations are primarily associated with geographic origin. Examples of this are Russian ballet, French ballet, and Italian ballet. Later variations, such as contemporary ballet and neoclassical ballet, incorporate both classical ballet and non-traditional technique and movement. Perhaps the most widely known and performed ballet style is late Romantic ballet (or Ballet blanc), a classical style that focuses on female dancers (ballerinas) and features pointe work, flowing and precise movements, and often presents the female dancers in traditional, short white tutus.

Romantic ballet is defined by an era during the early to mid 19th century (the romantic era) in which ballets featured themes that emphasized intense emotion as a source of aesthetic experience. The plots of many romantic ballets revolved around spirit women — sylphs, wilis, and ghosts — who enslaved the hearts and senses of mortal men. The 1827 ballet La Sylphide is widely considered to be the first, and the 1870 ballet Coppélia is considered to be the last work of romantic ballet. 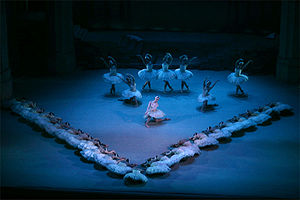 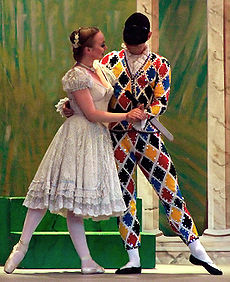 Harlequin and Columbina from the mime theater at Tivoli Gardens, Copenhagen, Denmark

Neoclassical ballet is a style that utilizes classical ballet technique and vocabulary, but deviates from classical ballet in its use of the abstract. In Neo-Classical Ballet, there often is no clear plot, costumes or scenery. Music choice can be diverse and will often include music that is also neo-classical (e.g. Stravinsky, Webern). Neo- Classical ballet opens up the use of space to multiple possibilities, as the elimination of the necessity of formalities and story telling allows far more possibilities for architecture and design in choreography.

Tim Scholl, author of From Petipa to Balanchine, considers George Balanchine's Apollo in 1928 to be the first neoclassical ballet. Apollo represented a return to form in response to Sergei Diaghilev's abstract ballets.[clarification needed] Balanchine worked with modern dance choreographer Martha Graham, expanding his exposure to modern techniques and ideas, and he brought modern dancers into his company (New York City Ballet) such as Paul Taylor, who in 1959 performed in Balanchine's Episodes.

While Balanchine is widely considered the face of Neo-Classical Ballet, there were others who made significant contributions to the development of the style. Fredrick Ashton’s Symphonic Dances (1946) is a seminal work for the choreographer, and is a work staged in white tunics, abstract and minimal set design with no discernable plot. Set to César Franck’s score of the same title, it is a pure-dance interpretation of the score in a manner that exemplifies the Ashton style.

Another form, Modern Ballet, also emerged as an offshoot of neo-classicism. Among the innovators in this form were Glen Tetley, Robert Joffrey and Gerald Arpino. While difficult to parse modern ballet from neo-classicism, the work of these choreographers favored a greater athleticism that departed from the delicacy of ballet. The physicality was more daring, with mood, subject matter and music more intense. An example of this would be Joffrey's Astarte (1967), which featured a rock score and sexual overtones in the choreography. 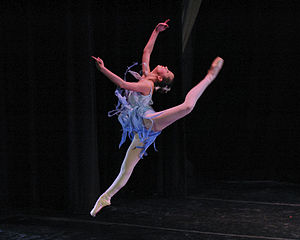 Contemporary ballet is a form of dance that opens up the doors to for any style to influence a work made utilizing ballet technique. Contemporary Ballet can take on a wide variety of aesthetics, incorporating pedestrian, modern, jazz, or ethnic forms, so long as a the roots of classical ballet are apparent. It allows for open-ended exploration and experimentation, but a good way to determine if a work is contemporary ballet, as opposed to contemporary dance, is to ask the question, is ballet training needed to perform this as it was intended?. Again, it can sometimes be difficult to parse this form from neo-classical or modern ballet. Some prime examples of this would be Twyla Tharp’s Deuce Coupe (1973) for the Joffrey Ballet. In this ballet, Tharp juxtaposed a ballerina clad in white who makes her way through the lexicon of ballet steps, while dancers clad in street clothes, sometimes in pointe shoes, socks or sneakers, dance in wide range of styles to the music of the Beach Boys. In the 1980s William Forsythe made substantial innovations[according to whom?] in contemporary ballet with a range of works, including In the Middle Somewhat Elevated (1987). This work featured a robust athleticism and electric score. Forsythe took classical ballet vocabulary and exaggerated it, making the dancers move bigger, faster and in more directions than before.

Many contemporary ballet concepts come from the ideas and innovations of 20th-century modern dance, including floor work and turn-in of the legs. This ballet style is often performed barefoot. Contemporary ballets may include mime and acting, and are usually set to music (typically orchestral but occasionally vocal).

George Balanchine, the founding director of the New York City Ballet, is considered[by whom?] to have been a pioneer of contemporary ballet because of his pioneering development of neoclassical ballet. Another early contemporary ballet choreographer, Twyla Tharp, choreographed Push Comes To Shove for the American Ballet Theatre in 1976, and in 1986 created In The Upper Room for her own company. Both of these pieces were considered innovative for their melding of distinctly modern movements with the use of pointe shoes and classically trained dancers.

Today there are many contemporary ballet companies and choreographers. These include Alonzo King and his company LINES Ballet; Matthew Bourne and his company New Adventures; Complexions Contemporary Ballet; Nacho Duato and his Compañia Nacional de Danza; William Forsythe and The Forsythe Company; and Jiří Kylián of the Nederlands Dans Theater. Traditionally "classical" companies, such as the Kirov Ballet and the Paris Opera Ballet, also regularly perform contemporary works.

The term ballet has evolved to include all forms associated with it. Someone training as a ballet dancer will now be expected to perform neo-classical, modern and contemporary work. A ballet dancer is expected to be able to be stately and regal for classical work, free and lyrical in neo-classical work, and unassuming, harsh or pedestrian for modern and contemporary work. The art form has grown vertically and horizontally and can sometimes be blurred with other dance forms, but although sometimes hidden (intentionally or not), the element of ballet technique will always be apparent.[citation needed]