From Infogalactic: the planetary knowledge core
Jump to: navigation, search
For other uses, see Ballot (disambiguation).

A ballot is a device used to cast votes in an election, and may be a piece of paper or a small ball used in secret voting.[1] It was originally a small ball (see blackballing) used to record decisions made by voters.

Each voter uses one ballot, and ballots are not shared. In the simplest elections, a ballot may be a simple scrap of paper on which each voter writes in the name of a candidate, but governmental elections use pre-printed to protect the secrecy of the votes. The voter casts his/her ballot in a box at a polling station.

In British English, this is usually called a "ballot paper".[2] The word ballot is used for an election process within an organisation (such as a trade union "holding a ballot" of its members).

The word ballot comes from Italian ballotta, meaning a “small ball used in voting” or a “secret vote taken by ballots” in Venice, Italy.[3] 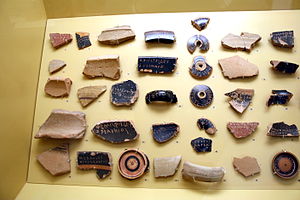 Ancient Greek bronze secret ballots used to cast a juror's vote on a case, 3rd century BC, Ancient Agora Museum in Athens, housed in the Stoa of Attalus

In ancient Greece, citizens used pieces of broken pottery to scratch in the name of the candidate in the procedures of ostracism.

The first use of paper ballots to conduct an election appears to have been in Rome in 139 BC.

In Ancient India, around 920 AD, in Tamil Nadu, Palm leaves were used for village assembly elections. The palm leaves with candidate names, will be put inside a mud pot, for counting. This was called Kudavolai system.[4][5][6]

The first use of paper ballots in America was in 1629 within the Massachusetts Bay Colony to select a pastor for the Salem Church.[7] Paper ballots were pieces of paper marked and supplied by voters.

Depending on the type of voting system used in the election, different ballots may be used. Ranked ballots allow voters to rank candidates in order of preference, while ballots for first-past-the-post systems only allow voters to select one candidate for each position. In party-list systems, lists may be open or closed.

The United States, a Republic, has a unique politics of long and short ballot. Before the Civil War, many[who?] believed governmental effectivness was enhanced by increasing the number of elective offices to include such comparatively minor posts as the state-level secretary of state, county surveyor, register of deeds, county coroner, and city clerk. A larger number of elected offices required longer ballots, and at times the long ballot has been suggested to have resulted in donkey voting and confusion, though the seriousness of either problem can be disputed. Progressivists attacked the long ballot during the Progressive Era (circa 1893–1917).[citation needed] 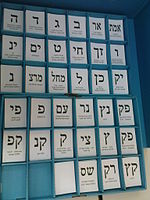 Ballots may be tickets rather than forms, as in Israel.

Ballot design can aid or inhibit clarity in an election. Poor designs lead to confusion and potentially chaos if large numbers of voters spoil or mismark a ballot. The butterfly ballot used in the Palm Beach County, Florida U.S. presidential election, 2000 (a ballot paper that has names down both sides, with a single column of punch holes in the center, which has been likened to a maze[8][9]) led to widespread allegations of mismarked ballots.[10]

Some political scientists[who?] prefer more explicit statement of the voter's actual tolerances and preferences, and believe that failure to reflect these in ballot design and voting system alternatives causes many problems and leads to calls for electoral reform. For instance, a non-binding referendum or poll, carried out on a ballot, carries much more weight than one carried out with only a public sampling in a less politically committed event than an election. For example, one might count the number of ballots whereon the voter had crossed out the name of the political party that nominated the candidate, even if (maybe only if) that voter had voted for him or her. This would indicate support for candidates but would be able to send signals to them that the "party line" was not why that voter voted for them, but rather, she or he expected them to act independently.

Such marking and counting could be carried out on an ordinary ballot with no provision for it, however, there would be risk of counting it as "spoiled" if the marks were unclear, and if ballot design had not allowed for it initially.