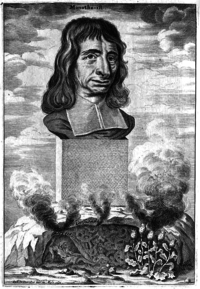 Balthasar Bekker (20 March 1634 – 11 June 1698) was a Dutch minister and author of philosophical and theological works. Opposing superstition, he was a key figure in the end of the witchcraft persecutions in early modern Europe. His best known work is De Betoverde Weereld (1691), or The World Bewitched (1695).

Bekker was born in Metslawier (Dongeradeel) as the son of a German pastor from Bielefeld. He was educated at Groningen, under Jacob Alting, and at Franeker. Becoming the rector of the local Latin school, he was appointed to his satisfaction in 1657 as a pastor in Oosterlittens (Littenseradiel), and started as one of the first to preach on Sunday afternoon.

From 1679 he worked in Amsterdam, after being driven from Friesland. In 1683 he travelled to England and France. In two months time Bekker visited London, Cambridge, Oxford, Paris and Leuven, with a great interest in the art of fortification.[1]

An enthusiastic disciple of Descartes, he wrote several works on philosophy and theology, which by their freedom of thought aroused considerable hostility.[2] In his book De Philosophia Cartesiana Bekker argued that theology and philosophy each had their separate terrain and that Nature can no more be explained through Scripture than can theological truth be deduced from Nature.[3] 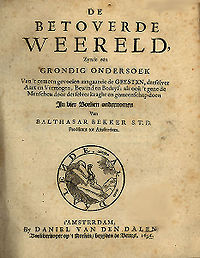 His application of Cartesian metaphysics and reproach of Biblical literalism put him at odds with the Dutch Reformed Church.[4]

His best known work was De Betoverde Weereld (1691), or The World Bewitched (1695), in which he examined critically the phenomena generally ascribed to spiritual agency. He attacked the belief in sorcery and "possession" by the devil. Indeed, he questioned the devil's very existence.[2] He applied the doctrine of accommodation to account for the biblical passages traditionally cited on the issue.[5] The book had a sensational effect and was one of the key works of the Early Enlightenment in Europe. It was almost certainly the most controversial.[6]

The publication of the book led to Bekker's deposition from the ministry. The orthodox among Dutch theologians saw his views as placing him among notorious atheists: Thomas Hobbes, Adriaan Koerbagh, Lodewijk Meyer and Baruch Spinoza. Eric Walten came to his defence, attacking his opponents in extreme terms.[7] Bekker was tried for blasphemy, maligning the public Church, and spreading atheistic ideas about Scripture. Some towns banned the book, but Amsterdam and the States of Holland never did, continuing his salary, without formally stripping him of his post.[8]

The World Bewitched is now considered interesting as an early study in comparative religion.[2][9]