Icebreaker Moscow during the final stage of construction on the Baltic Shipyard, 2008 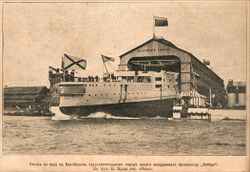 May 1900: Launch of the battleship Pobeda (Victory) on the Baltic Shipyard 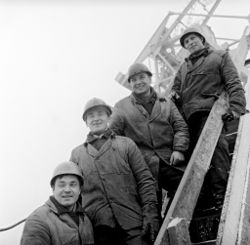 Workers of the Baltic Shipyards in 1971

The Baltic Shipyard (Baltiysky Zavod, formerly Shipyard-189) (Russian: Балтийский завод имени С. Орджоникидзе) is one of the oldest shipyards in Russia. It is located in Saint Petersburg in the south-western part of Vasilievsky Island. It is one of the three shipyards active in Saint Petersburg. Together with the Admiralty Shipyard it has been responsible for building a large part of Imperial Russian battleships as well as Soviet nuclear-powered icebreakers. Currently it is specializing in merchant ships while the Admiralty yard specializes in diesel-electric submarines.

The shipyard was founded in 1856 by the St. Petersburg merchant M. Carr and the Scotsman M. L. MacPherson. It subsequently became the Carr and MacPherson yard.[1] In 1864 it built two monitors of the Uragan class.[1] In 1874 the shipyard was sold to Prince Ochtomski.[1]

In 1934 the shipyard started work on the three prototypes for the S-class submarine, based on a German design produced by the Dutch company Ingenieurskantoor voor Scheepsbouw. The Soviets renamed the shipyard Numbered Zavod 189 'im. Sergo Ordzhonikidze' on 30 December 1936.