From Infogalactic: the planetary knowledge core
Jump to: navigation, search
Not to be confused with Balto-Finnic languages.

The Baltic languages belong to the Balto-Slavic branch of the Indo-European language family, and are spoken by the Balts. Baltic languages are spoken mainly in areas extending east and southeast of the Baltic Sea in Northern Europe. They are usually considered a single family divided into two groups: Western Baltic, containing only extinct languages, and Eastern Baltic, containing two living languages, Lithuanian and Latvian. The range of the Eastern Balts once reached to the Ural mountains.[3][4][5][dubious – discuss] Although related, the Lithuanian, the Latvian, and particularly the Old Prussian vocabularies differ substantially from one another and are not mutually intelligible. The now-extinct Old Prussian language is considered the most archaic of the Baltic languages.[6]

The Baltic languages are generally thought to form a single family with two branches, Eastern and Western. However, these are sometimes classified as independent branches of Balto-Slavic.[2] 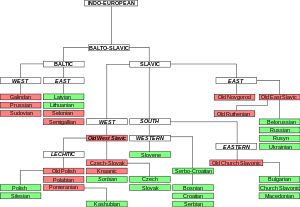 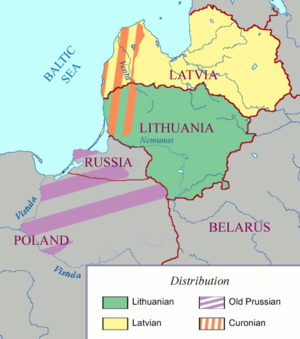 Speakers of modern Baltic languages[7] are generally concentrated within the borders of Lithuania and Latvia, and in emigrant communities in the United States, Canada, Australia and states of the former Soviet Union. Historically the languages were spoken over a larger area: West to the mouth of the Vistula river in present-day Poland, at least as far East as the Dniepr river in present-day Belarus, perhaps even to Moscow, perhaps as far south as Kiev. Key evidence of Baltic language presence in these regions is found in hydronyms (names of bodies of water) in the regions that are characteristically Baltic. Use of hydronyms is generally accepted to determine the extent of these cultures' influence, but not the date of such influence. Historical expansion of the usage of Slavic languages in the South and East, and Germanic languages in the West reduced the geographic distribution of Baltic languages to a fraction of the area that they formerly covered.

Although the various Baltic tribes were mentioned by ancient historians as early as 98 B.C.,[citation needed] the first attestation of a Baltic language was in about 1350, with the creation of the Elbing Prussian Vocabulary, a German to Prussian translation dictionary. It is also believed that Baltic languages are among the most archaic of the remaining Indo-European languages, despite their late attestation. Lithuanian was first attested in a hymnal translation in 1545; the first printed book in Lithuanian, a Catechism by Martynas Mažvydas was published in 1547 in Königsberg, Prussia (now Kaliningrad, Russia). Latvian appeared in a hymnal in 1530 and in a printed Catechism in 1585. One reason[citation needed] for the late attestation is that the Baltic peoples resisted Christianization longer than any other Europeans, which delayed the introduction of writing and isolated their languages from outside influence.

With the establishment of a German state in Prussia, and the eradication or flight of much of the Baltic Prussian population in the 13th century, the remaining Prussians began to be assimilated, and by the end of the 17th century, the Prussian language had become extinct.

During the years of the Polish–Lithuanian Commonwealth (1569–1795), official documents were written in Polish, Ruthenian and Latin. After the Partitions of Commonwealth, most of the Baltic lands were under the rule of the Russian Empire, where the native languages were sometimes prohibited from being written down, or used publicly (see Lithuanian press ban).[citation needed]

Relationship with other Indo-European languages

Finally, there is a minority of scholars who argue that Baltic descended directly from Proto-Indo-European, without an intermediate common Balto-Slavic stage. They argue that the many similarities and shared innovations between Baltic and Slavic are due to several millennia of contact between the groups, rather than shared heritage.[14]