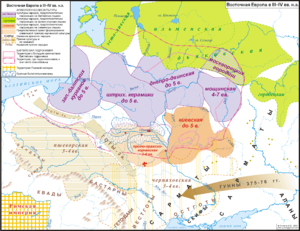 Map of eastern Europe in 3-4th century AD with archeological cultures identified as Baltic-speaking in purple. Their area extended from the Baltic Sea to modern Moscow. 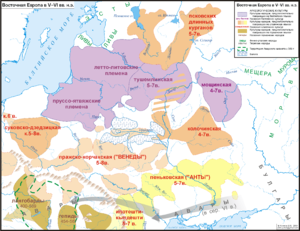 During the Migration Period in 5-6th century AD, the area of archeological cultures identified as Baltic is becoming more fragmented. 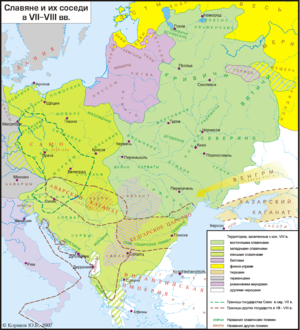 By the 7-8th century AD, only Eastern Galindians remain in the east within the Slavic territory.

The Balts or Baltic people (Lithuanian: baltai, Latvian: balti) are an Indo-European ethno-linguistic group who speak the Baltic languages, a branch of the Indo-European language family, which was originally spoken by tribes living in area east of Jutland peninsula in the west and Moscow, Oka and Volga rivers basins in the east. One of the features of Baltic languages is the number of conservative or archaic features retained.[1] Among the Baltic peoples are modern Lithuanians, Latvians (including Latgalians) — all Eastern Balts — as well as the Old Prussians, Yotvingians and Galindians — the Western Balts — whose people also survived, but their languages and cultures are now extinct.

Adam of Bremen in the latter part of the 11th century AD was the first writer to use the term Baltic in its modern sense to mean the sea of that name.[2] Although he must have been familiar with the ancient name, Balcia,[3] meaning a supposed island in the Baltic Sea,[2] and although he may have been aware of the Baltic words containing the stem balt-, "white",[4] as "swamp", he reports that he followed the local use of balticus from baelt ("belt") because the sea stretches to the east "in modum baltei" ("in the manner of a belt"). This is the first reference to "the Baltic or Barbarian Sea, a day's journey from Hamburg."[5]

The Germanics, however, preferred some form of "East Sea" (in different languages) until after about 1600, when they began to use forms of "Baltic Sea." Around 1840 the German nobles of the Governorate of Livonia devised the term "Balts" to mean themselves, the German upper classes of Livonia, excluding the Latvian and Estonian lower classes. They spoke an exclusive dialect, Baltic German. For all practical purposes that was the Baltic language until 1919.[6][7] Scandinavians begin settling in Western Baltic lands in Lithuania and Latvia during Vendel Age and with interruptions their presence in Baltic lands continued most of Viking Age.

In 1845 Georg Heinrich Ferdinand Nesselmann proposed a distinct language group for Latvian and Lithuanian to be called Baltic.[8] It found some credence among linguists but was not generally adopted until the creation of the Baltic states as part of the settlement of World War I in 1919. Gradually the non-Baltic Estonian was excluded from the linguistic meaning of Baltic, as was Livonian, a now extinct[9] Finnic language in present-day Latvia, while Old Prussian — long recognized as close to Lithuanian and Latvian — was added. Estonia and Finland (the states of Baltic Finns), however, also became counted among the Baltic states in the geopolitical sense. (Finland was dropped from this definition after World War II, though Estonia remains within the definition.)

The Balts or Baltic peoples, defined as speakers of one of the Baltic languages, a branch of the Indo-European language family, are descended from a group of Indo-European tribes who settled the area between the lower Vistula and southeast shore of the Baltic Sea and upper Daugava and Dnieper rivers. Because the thousands of lakes and swamps in this area contributed to the Balts' geographical isolation, the Baltic languages retain a number of conservative or archaic features.

It is possible[according to whom?] that around 3,500–2,500 B.C., there was massive migration of peoples representing the Corded Ware culture. They came from the southeast and spread all across Eastern and Central Europe, reaching even southern Finland. It is believed[by whom?] that Corded Ware culture peoples were Indo-European ancestors of many Europeans, including Balts. It is thought[by whom?] that those Indo-European newcomers were quite numerous and in the Eastern Baltic assimilated earlier indigenous cultures (Europidic cultures – Narva culture and Neman culture). Over time the new people formed the Baltic peoples and they spread in the area from the Baltic sea in the west to the Volga in the east.[citation needed]

Some of the major authorities on Balts, such as Būga, Vasmer, Toporov and Trubachov,[citation needed] in conducting etymological studies of eastern European river names, were able to identify in certain regions names of specifically Baltic provenance, which most likely indicate where the Balts lived in prehistoric times. This information is summarized and synthesized by Marija Gimbutas in The Balts (1963) to obtain a likely proto-Baltic homeland. Its borders are approximately: from a line on the Pomeranian coast eastward to include or nearly include the present-day sites of Berlin, Warsaw, Kiev, and Kursk, northward through Moscow to the River Berzha, westward in an irregular line to the coast of the Gulf of Riga, north of Riga.

A possible early reference to a Baltic people occurs in 98 AD, when Tacitus names a tribe living near the Baltic Sea (Mare Svebicum) as the Aesti (Aestiorum gentes) and describes them as amber gatherers. However, it is not clear if the Aesti mentioned by Tacitus were: (1) a (now-extinct) Baltic people (possibly synonymous with the Brus/Prūsa), or; (2) a Finno-Ugric people (e.g. modern Estonians). The Aesti appear to have inhabited the Sambian peninsula (in or near the present Kaliningrad Oblast[citation needed] .

Over time, the area of Baltic habitation shrank, due to assimilation by other groups, and invasions. According to one of the theories which has gained considerable traction over the years, one of the western Baltic tribes, the Galindians, Galindae, or Goliad, migrated to the Eastern end of Baltic realm around the 4th century AD, and settled around modern day Moscow, Russia.[citation needed] Finally, according to Slavic chronicles of the time, they warred with Slavs, and perhaps, were defeated and assimilated some time in the 11th to 13th centuries.[citation needed]

Balts became differentiated into Western and Eastern Balts in the late centuries BCE. The eastern Baltic region was inhabited by ancestors of the Western Balts: Brus/Prūsa ("Old Prussians"), Sudovians/Jotvingians, Scalvians, Nadruvians, and Curonians. The Eastern Balts, including the hypothesised Dniepr Balts, were living in modern day Belarus, Ukraine and Russia.

Subsequent Germanic and Gothic domination in the first half of the first millennium AD in Northern and Eastern Europe, as well as later Slavic expansion, caused large migrations of the Balts — first, the Galindae or Galindians towards the east, and later, Eastern Balts towards the west — until, in the 13th and 14th centuries, they reached the general area that the present-day Balts inhabit. Many other Eastern and Southern Balts either assimilated with other Balts, or Slavs in the 4th–7th centuries and were gradually slavicized.[citation needed]

In the 12th and the 13th centuries, internal struggles, as well as invasions by Ruthenians and Poles and later the expansion of the Teutonic Order resulted in an almost complete annihilation of the Galindians, Curonians, and Yotvingians.[citation needed] Gradually Old Prussians became Germanized or some Lithuanized during period from the 15th to the 17th centuries, especially after the Reformation in Prussia.[citation needed] The cultures of the Lithuanians and Latgalians/Latvians survived and became the ancestors of the populations of the modern countries of Latvia and Lithuania. 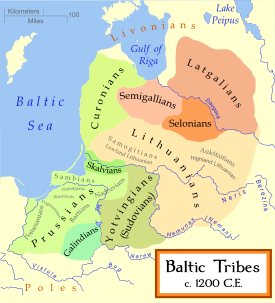