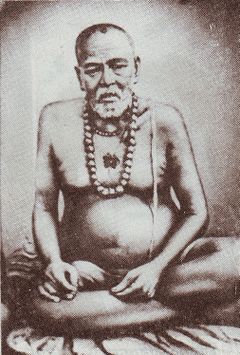 Bamakhepa, the tantric saint of Tarapith in the 19th century

Bamakhepa (1837–1911),[1](Bengali: বামাক্ষ্যাপা) born Bamacharan Chattopadhyay, popularly known as the "mad saint," was a Hindu saint, held in great reverence in Tarapith and whose shrine is also located in the vicinity of the Tara temple. He was born in the midnight of Shivaratri (the holy night dedicated to Shiva) in the village named Atla of Birbhum district to a Shyama-sangeet singer Sarbananda Chattopadhyay. He was named Bamacharan (one who is dedicated to the lotus feet of Bama = the devi with the left foot forward on the chest of Shiva, i.e., Goddess Tara). Amongst very few, he holds the title Sadhak-pravar Bamdev. He is a true yogi, and was known to have tremendous supernatural powers. While it is true, that people called him Bamakhepa and `khepa' means mad, devout Shakti-sadhaks doesn't think of him as a mad saint; as is usually the folklore. He is the man `mad of Bama or divinely intoxicated', thus he gets that name. Locals called him Khepa-baba, Bama as well. `Khepa' is a term used in Tantrik traditions to praise a worshipper to the superlative degree, thus he was called that way. He is also referred as Shri Bam, Bamdev in the community of shaktas, and is the Bhairav of Tarapith.

As a child, he worshipped Goddess Tara at his home. He had to take a job of a priest at the temple of Mauliksha Devi in Maluti due to growing poverty at home. But he was disqualified from the job because he could not chant Sanskrit mantras. He was converted to a cook at the same temple (but continued to worship Devi in informal mode during the night after his job was over), where he worked for a year or more before something fascinating was waiting for him in the burning ground of Tarapith. He found at Tarapith, the job of picking flowers and making it ready for puja and got a salary of Rs 2 per month. He ever questioned the priests, whether the statue of Goddess Tara was real, whether she can talk or has someone really seen her. Consequently, he met Pisach-siddha Brajabasi Kailashpati, a prolific tantrik in the Tarapith burial ground. He used to stand far away from the crowd that met Kailashpati everyday, but concentrated on his preachings, where he heard the term "Kundalini" for the first time. He was hesitant to approach Kailashpati for he was uneducated but finally dived on Kailashpati's feet demanding to help him see Goddess Tara. After several refusals, Kailashpati promised that Bama's dream would come true. On one amavasya midnight, Kailashpati gave Bama the red robe, the trishul, the rudraksha, the sindur took him to what is known in Tarapith as the famous Vashistha—asan. It is a very famous Panchamundi asan, extremely powerful and is lively everytime and is the same seat from which Sage Vashistha performed extreme penance with Tara mantra. Kailashpati made Bama sit on Vashistha—asan and whispered him the Tara mantra and asked him to meditate without distraction, else face the penalty of a 'bhrasta-sadhak'. He overcame several challenges being distracted by yoginis, spirits and went uninterupped by all these to finally have darshan on the midnight of next Kaushiki Amavasya (the dark night on the month of Bhadr)

Subsequently, he mastered Tantra sadhana from his uttar sadhak (another senior disciple of Kailashpati) Kaulacharya Mokshadananda in Bamachar. Among his notable friends in Tarapith was a servitor of the Tara temple named Nagen Panda, whom he called Nagen—Kaka (Uncle—Nagen, even though Bama was much senior to him). He had an assistant named Gadai (usually shortened form of Gadadhar), who brought him food and took care of his hut/ashram. He was a rational person as opposed to being called mad; he fought back for the increase of salaries of temple servitors, and donated all of what his disciples would give him to get the tax of villagers waived and contributed significant portion of what people donated to the freedom struggle, through his disciple named Tarakhepa. He believed in non violence and had asked Tarakhepa (premonastic name Pramatha) and eminent revolutionary poet Mukunda Das to throw their guns. Such facts are never cited.

In fact, he is the Omnipotence or the Soyyambhu (God in Hindu) by default, He taken birth to revive human being from their poor present where they face whip of destiny.

Amongst his notable disciples are Tarakehpa and Nigamananda Saraswati (premonastic name Nalanikanta Bhattacharyya). It is usually told that ghosts would even be afraid to create a nuisance, when they would see the guru—sishya duo Bamakhepa and Tarakhepa. Realizing that Nalanikanta is on the verge of full-fledged monastic life, Bamakhepa taught him tantra sadhana for just 20 days and on the 21st night which happened to an amavasya, he convinced Nalanikanta to sit on a dead in the evening. Scared Nalanikanta initially denied but then agreed to the scolding of Bamakhepa. He was asked to chant the Tara—beej mantra all throughout, without distraction, till his dreams of Devi—darshan is fulfilled. Nalanikanta had hurdles along the way, being challenged by ghosts but Bamakhepa helped him from distance roaring towards the ghosts and asking Nalanikanta not to leave his seat. Leaving the seat is a `fowl' in Tantra sadhana (for what is the reason of scare, if he has the faith that the one whom he/she is meditating is on his/her side). Right before dawn, Nalanikanta saw Devi in the form of his wife, and upon request asked Devi to manifest herself in her own iconographic form. He could not bear the `chandogra' form of Goddess Tara, was shivering and went to trance.He used to beat maa tara when she was unable to eat the food given by him as it was a idol made by him, then he went to the temple and saw the red spots on maa's back.

Bamakhepa, goddess Tara's ardent devotee lived near the temple and mediated in the cremation grounds.[1] He was a contemporary of another famous Bengali saint Ramakrishna. At a young age, he left his house and came under the tutelage of a saint named Kailsahpathi Baba, who lived in Tarapith. He perfected yoga and Tantric sadhana (worship), which resulted in his becoming the spiritual head of Tarapith. People came to him seeking blessings or cures for their illness, in distress or just to meet him. He did not follow the set rules of the temple and as result was even once roughed up by the temple priests for taking food meant as offering for the deity. It is said: Tara appeared in the dream of Maharani ("Queen") of Natore and told her to feed the saint first as he was her son. After this incident, Bamakhepa was fed first in the temple before the deity and nobody obstructed him.[2] It is believed that Tara gave a vision to Bamakhepa in the cremation grounds in her ferocious form and then took him to her breast.[1]

Sadhok Bamakhyapa, which has had an uninterrupted run on colours Bangla since Jan 15, 2007 not only shows the presence of this great figure in our lives, but also celebrates the feat of a serial which has become a part of our daily lives. We have retrieved one of the most important figures in our philosophy from the pages of history....