From Infogalactic: the planetary knowledge core
Jump to: navigation, search
For the Cambodian "Bamboo Curtain" and the Cuban "Cactus Curtain", see K5 Plan and Gitmo. 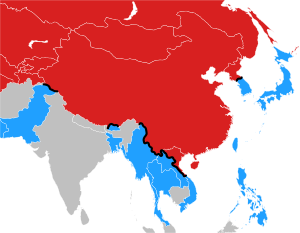 The Bamboo Curtain in 1959. The Curtain itself is in black. Note that at the time, Laos was allied with the United States, as the Communist Pathet Lao did not take over the country until later. Also, North and South Vietnam had not yet been united. The boundaries of the now-independent former Soviet republics are anachronistically shown.

The Bamboo Curtain was a colorful Cold War expression for the political demarcation between the Communist states of East Asia, particularly the People's Republic of China, and the capitalist and non-Communist states of the region. People in Asian Communist nations were said to be "behind the Bamboo Curtain." The term was derived from "Iron Curtain", a term used widely in Europe from the late 1940s to the early '90s to refer to that region's Communist boundaries.

The term "Bamboo Curtain" was only rarely applied to the Korean Demilitarized Zone dividing North and South Korea and the flexible Southeast Asia borders between Communism and the West (here referring to the forces aligned against Communism during the Cold War).

During the Cultural Revolution in China, the Chinese authorities put sections of the "curtain" under a lock-down of sorts, forbidding entry into or passage out of the country without permission from the Chinese government. Many would-be refugees attempting to flee to capitalist countries were prevented from escaping. Occasional relaxations led to several waves of refugees into the then-British crown colony of Hong Kong.

The term "Bamboo Curtain" was used less often than the term "Iron Curtain" in part because while the latter remained relatively static for over 40 years, the former shifted frequently and was somewhat less precise. It was also a less accurate description of the political situation in Asia because of the lack of cohesion within the East Asian Communist Bloc, which resulted in the Sino-Soviet split. During the Cold War, Communist governments in Mongolia, Vietnam and later Laos were allies of the Soviet Union, though they sometimes cooperated with China, while Cambodia's Pol Pot regime was loyal to China. After the Korean War, North Korea avoided taking sides between the Soviets and China. (Since the end of a Communist bloc in Asia, North Korea remains on good terms with both Russia and China.)

Improved relations between China and the United States during the later years of the Cold War rendered the term more or less obsolete,[1] except when it referred to the Korean Peninsula and the divide between allies of the US and allies of the USSR in Southeast Asia. Today, the demilitarized zone separating North and South Korea is typically described as the DMZ. "Bamboo Curtain" is used most often to refer to the enclosed borders and economy of Burma[2][3] (though this began to open in 2010). The Bamboo Curtain has since given way to the business model called the bamboo network.