From Infogalactic: the planetary knowledge core
(Redirected from Bandwidth shaping)
Jump to: navigation, search
For the scheduling of processes, see process scheduler. 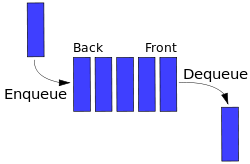 Packets queuing in a FIFO (first in, first out) data structure.

A network scheduler, also called packet scheduler, is an arbiter program on a node in packet switching communication network. It manages the sequence of network packets in the transmit and receive queues of the network interface controller, which is a circular data buffer. There are several network schedulers available for the different operating system kernels, that implement many of the existing network scheduling algorithms.

The network scheduler logic decides, in a way similar to statistical multiplexers,[citation needed] which network packet to forward next from the buffer. The buffer works as a queuing system, storing the network packets temporarily until they are transmitted. The buffer space may be divided into different queues, with each of them holding the packets of one flow according to configured packet classification rules; for example, packets can be divided into flows by their source and destination IP addresses. Network scheduling algorithms and their associated settings determine how the network scheduler manages the buffer.

In the course of time several network scheduling algorithms (also called queueing discipline, qdisc or queueing algorithm) have been developed. Each of the scheduling algorithms used internally for these queuing disciplines provides specific reordering or dropping of network packets inside various transmit or receive buffers.[1][2] Queuing disciplines are commonly used as attempts to compensate for various networking conditions, like reducing the latency for certain classes of network packets, and are generally used as part of the quality of service (QoS) measures.[3][4][5]

Examples of algorithms suitable for managing network traffic include:

Several of the above have been implemented as Linux kernel modules[17] and are freely available.

Bufferbloat is a phenomenon in packet-switched networks generally, in which excess buffering of packets causes high latency and packet delay variation (also known as jitter), as well as reducing the overall network throughput. When a router device is configured to use excessively large buffers, even very high-speed networks can become practically unusable for many interactive applications like voice calls, chat, and even web surfing.

The CoDel algorithm attempts to reduce this problem by improving upon the RED algorithm.[citation needed] CoDel is less prone to the effects of bufferbloat than the common tail drop disciplines.[citation needed] 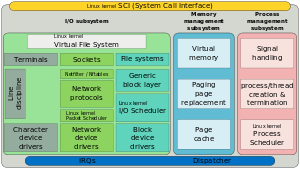 The Linux kernel's packet scheduler is part of the network stack, together with netfilter, nftables, and Berkeley Packet Filter.

The Linux kernel packet scheduler is configured using the userspace CLI utility called tc (short for "traffic control"). As the default queuing discipline, the packet scheduler uses a FIFO implementation called pfifo_fast,[18] although systemd since its version 217 changes the default queuing discipline to fq_codel.[19] The packet scheduler is an integral part of the Linux kernel's network stack and manages the ring buffers of all NICs, by working on the layer 2 of the OSI model and handling Ethernet frames, for example. It manages the transmit and receive buffers of all NICs installed in a computer.

The user space programs ifconfig and ip enable system administrators to configure the buffer sizes txqueuelen and rxqueuelen for each device separately, with their units being number of Ethernet frames regardless of their size. The Linux kernel's network stack contains several other buffers, which are not managed by the network scheduler. The overall size of all buffers has been the point of critique by the Bufferbloat project, which provided a partial solution with CoDel that has been primarily tested in OpenWrt.

Another network scheduler is being developed as part of Netfilter and nftables.[clarification needed]

eBPF was merged into the Linux kernel mainline in kernel version 3.18, and eBPF filters can also be attached to the packet scheduler's classifiers since the kernel version 4.1.[20] The eBPF functionality brought by version 4.1 of the Linux kernel extends the "classic" BPF programmable classifier by extending its scope to native eBPF code, allowing userspace to implement its own custom, safe, C-like classifiers that can be compiled using the LLVM eBPF backend and loaded into a running kernel using the tc utility.[21][better source needed]

ALTQ is the implementation of a network scheduler for BSDs.