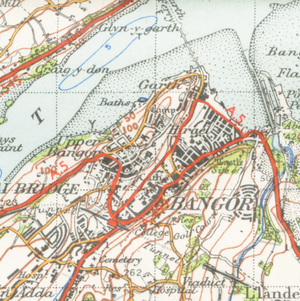 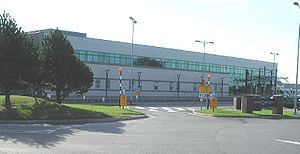 Bangor (English /ˈbæŋɡər/; Welsh: [ˈbaŋɡɔr]) is a city in Gwynedd unitary authority, north west Wales, and one of the smallest cities in Britain. It is the oldest city in Wales. Historically in Caernarfonshire, it is a university city with a population of 18,808 at the 2011 census,[1] including around 10,000 students at Bangor University and including Pentir community. It is one of only six places classed as a city in Wales, although it is only the 36th-largest urban area by population. According to the 2001 census, 46.6% of the non-student resident population speak Welsh, which is low for Gwynedd but despite this, the language keeps a high profile in the city.[2] 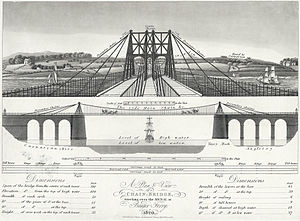 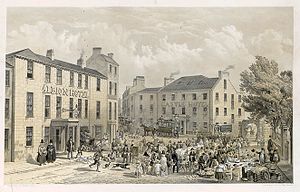 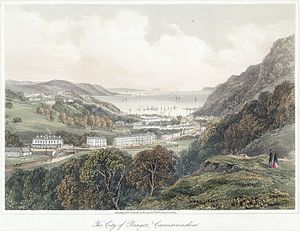 The origins of the city date back to the founding of a monastic establishment on the site of Bangor Cathedral by the Celtic saint Deiniol in the early 6th century AD. Bangor itself is an old Welsh word for a wattled enclosure,[3] such as the one that originally surrounded the cathedral site. The present cathedral is a somewhat more recent building and has been extensively modified throughout the centuries.

While the building itself is not the oldest, and certainly not the biggest, the bishopric of Bangor is one of the oldest in Britain. Another claim to fame is that Bangor allegedly has the longest High Street in Wales and the United Kingdom.[4] Friars School was founded as a free grammar school in 1557, and Bangor University was founded in 1884.

In 1877, the former HMS Clio became a school ship, moored on the Menai Strait at Bangor, and had 260 pupils. Closed after the end of hostilities of World War I, she was sold for scrap and broken up in 1919.

During World War II, parts of the BBC evacuated to Bangor during the worst of the Blitz.

Bangor lies on the coast of North Wales near the Menai Strait which separates the island of Anglesey from Gwynedd unitary authority, the town of Menai Bridge lying just over the strait, the combined population of the two amounting to 22,184 people. Bangor Mountain lies to the east of the main part of the city, but the large housing estate of Maesgeirchen, originally built as council housing, is to the east of the mountain near Port Penrhyn. Bangor Mountain casts a shadow across the High Street, Glan Adda and Hirael areas, so that from November to March some parts of the High Street in particular receive no direct sunlight[citation needed]. Another ridge rises to the north of the High Street, dividing the city centre from the south shore of the Menai Strait; this area is known as Upper Bangor (Bangor Uchaf). Bangor has two rivers within its boundaries. The River Adda is a largely culverted watercourse which only appears above ground at its western extremities near the Faenol estate, whilst the River Cegin enters Port Penrhyn at the eastern edge of the city. Port Penrhyn was an important port in the 19th century, exporting the slates produced at the Penrhyn Quarry.

Bangor lies at the western end of the North Wales Path, a 60-mile (100 km) long-distance coastal walking route to Prestatyn. It is also on routes 5, 8 and 85 of the National Cycle Network.

Bangor railway station, which serves the city, is located on the North Wales Coast Line from Crewe and Chester to Holyhead.

The A55 runs immediately to the south of Bangor, providing road transport to Holyhead in the west and Chester to the east.

The nearest airport with international flights is Liverpool John Lennon Airport, 83 miles away by road.

Classical music is performed regularly in Bangor, with concerts given in the Powis and Prichard-Jones Halls as part of the university's Music at Bangor concert series. The city is also home to the Gwynedd Museum and Art Gallery. A new arts centre, the Pontio arts complex, is earmarked for completion in the summer of 2014.,[5] this was delayed until opening November 2015[6]

Garth Pier is the second longest pier in Wales, and the ninth longest in the British Isles, at 1,500 feet (460 m) in length. It was opened in 1893 and was a promenade pier, for the amusement of holiday-makers who could stroll among the pinnacle-roofed kiosks. In 1914 it was struck by a vessel that had broken free of its moorings. The damaged section was repaired temporarily by the Royal Engineers, but when in 1922, a permanent repair was contemplated, it was found that the damage was more severe than had been thought. The repairs were made at considerable cost and the pier remained open until 1974 when it was nearly condemned as being in poor condition. It was sold for a nominal price to Arfon Borough Council who proposed to demolish it, but the County Council, encouraged by local support, ensured that it survived by obtaining Grade II Listed building status for it.[7] When it was listed that year, the British Listed Buildings inspector considered it to be "the best in Britain of the older type of pier without a large pavilion at the landward end".[8] Restoration work took place between 1982 and 1988, and the pier was re-opened to the public on 7 May 1988.[7] In November 2011, essential repair work was reported to be required, the cost being estimated at £2 million. A grant from the Heritage Lottery Fund was sought but the application was rejected.[9]

The Cathedral Church of St Deiniol is a Grade I Listed building and is set in a sloping oval churchyard. The site has been used for Christian worship since the sixth century but the present building dates from the twelfth century. It has a two-bay chancel, transepts, a crossing tower, a seven-bay nave and a tower at the west end.[10]

Bangor was the setting for scene I of William Shakespeare's Henry IV, Part 1.[11]

Bangor has a central shopping area around the High Street, and retail outlets on Caernarfon Road, on the outskirts of the city. One of these is St. David's Retail Park, built on the site of the demolished St David's maternity hospital.

In 1865, Morris Wartski, a refugee from the Tsarist pogroms, first established a jewellery business on Bangor's High Street, and then a drapery store. His son, Isidore, went on to develop the drapery business and to create a large, fashionable, store. He also redeveloped the Castle Inn on High Street in Bangor, which then became the high-class Castle Hotel. He was a very popular mayor of the city and a great patron of local sports and charities. Wartski Fields were bequeathed to the city and people of Bangor by his widow, Winifred Marie, in memory of Isidore Wartski.

Bangor is located within Gwynedd, the most Welsh Speaking county in Wales, in which 65.4% of people over age three said they could speak Welsh at the 2011 Census. In spite of this, Bangor has, for a relatively long time, been significantly more Anglicised than its hinterland and the rest of Gwynedd in general. While notable nearby towns in Gwynedd, such as Bethesda and Caernarfon were still more than 75% and 80% Welsh speaking, respectively, in 2011,[12] Bangor was already only 53.4% Welsh speaking as early as 1971,[13] In 2011, only 36% of the population of Bangor said they could speak Welsh; a significant decrease from the 46% recorded at the 2011 Census.[14][15][15] However, that does not necessarily mean that 36% of the towns population speaks Welsh habitually or that such a figure is true of all age groups; reports of the local primary schools suggest that as few as 25% of school children speak Welsh as their main language at home. This does, however vary significantly from primary school to primary school:

The reasons for this are that the city has for long been the most cosmopolitan settlement in Gwynedd, attracting the most incomers from both England and further afield, with Bangor University being a key institution. At the 2011 Census, 49.3% of Bangor's population was born outside Wales.[14][15][15]

Bangor University and Coleg Menai are located in the city. Secondary schools include Ysgol Friars, Ysgol Tryfan, Hillgrove School and St. Gerard's School. There are also a number of primary and infant schools.[16]

Ysbyty Gwynedd is located in Bangor in the suburb of Penrhosgarnedd. It has 453.8 beds, making it slightly smaller than the other district general hospitals in Betsi Cadwaladr University Health Board (after Wrexham Maelor Hospital with 581.3 beds and Ysbyty Glan Clwyd near Rhyl with 490.9 beds.[17] It houses the headquarters of the Betsi Cadwaladr University Health Board.

Bangor has a long-established football team, Bangor City F.C. which competes in the national Welsh Premier League (formerly League of Wales). Bangor City have won this league on three occasions (1994, 1995, 2011) and been continuous members of the league since its inception. Bangor City have also won the Welsh Cup eight times, most recently in the 2010 competition. Before 1992 they were members of the English football pyramid, peaking with the Northern Premier League title in 1982 and being FA Trophy runners-up in 1984. They have also competed in the UEFA Cup Winners' Cup three times (including its final season, 1998-99, before being merged into the UEFA Cup), UEFA Champions League twice, and UEFA Cup five times, though they have not progressed far in any of the European competitions. Many Bangor fans have been seen to have anger towards the Welsh FA for forcing Bangor into the Welsh Premier League when there are other Welsh teams in the English pyramid system. Bangor is also home to rugby union team Bangor RFC who play in the WRU Division Two North league.

Bangor is home to a small BBC broadcasting centre, producing a large amount of output for BBC Radio Cymru. The studios are also the main North-West Wales newsroom for television, radio and on-line. The BBC's Light Entertainment Department moved to Bangor during World War II and many classic programmes (like It's That Man Again) came from Bangor.

Bangor was also previously home to two commercial radio stations, Heart Cymru (serving Anglesey and Gwynedd) and the now-defunct Heart North Wales Coast (serving the North Wales Coast), which shared studio facilities on the Parc Menai office complex - the studios were closed in August 2010 after the stations were moved to Wrexham.

Bangor University also has its own student radio station called Storm FM, which broadcasts to the Ffriddoedd Site and from their website.

In 1967, The Beatles came to Bangor, staying in Dyfrdwy, one of the halls comprising Adeilad Hugh Owen (Hugh Owen Building), now part of the Management Centre, for their first encounter with Maharishi Mahesh Yogi, during which visit they learned of the death of their manager Brian Epstein.[18][19]

On 24 February 2010 BBC Radio 1's The Chris Moyles Show announced Bangor as the location for Radio 1's Big Weekend concert festival. The morning show was broadcast on location from Bangor, with the announcement as well as a portion of the lineup being revealed. Big international acts such as Rihanna, MGMT, Kesha and Alicia Keys played as well as homegrown British acts like Biffy Clyro, Pixie Lott, Cheryl Cole, Pendulum and Dizzee Rascal.