Banjul, officially the City of Banjul and formerly known as Bathurst, is the capital of the Gambia and is in a division of the same name. The population of the city proper is only 34,828, with the Greater Banjul Area, which includes the City of Banjul and the Kanifing Municipal Council, at a population of 357,238 (2003 census).[1] Banjul is on St Mary's Island (Banjul Island), where the Gambia River enters the Atlantic Ocean. The island is connected to the mainland to the west and the rest of Greater Banjul Area via bridges. There are also ferries linking Banjul to the mainland at the other side of the river.

Banjul takes its name from the Mandé people who gathered specific fibres on the island, which were used in the manufacture of ropes. Bang julo is the Mandinka (Mande) word for rope fibre. The mispronunciation led to the word Banjul.[citation needed] 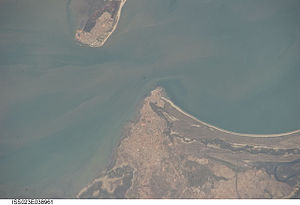 View of Banjul from NASA

In 1651 Banjul was leased by The Duke of Courland and Semigallia (German: Herzog von Kurland und Semgallen) from the King of Kombo, as part of the Couronian colonization.[2]

In 1816, the British founded Banjul as a trading post and base for suppressing the slave trade. The British renamed Banjul Island as St. Mary's Island and first named Bathurst after The 3rd Earl Bathurst, Secretary of State for War and the Colonies at the time. The name was changed to Banjul in 1973.[3] 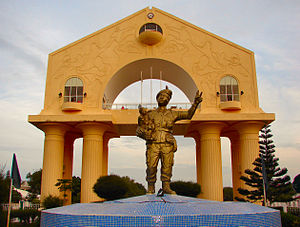 Arch 22 at the entrance to Banjul

On 22 July 1994 Banjul was the scene of a bloodless military coup d'état in which President Sir Dawda Jawara was overthrown and replaced by the country's current President Yahya Jammeh. To commemorate this event, Arch 22 was built as an entrance portal to the capital. The gate is 35 metres tall and stands at the centre of an open square. It houses a textile museum.

Banjul is the destination of the Plymouth-Banjul Challenge, a charity road rally.

Banjul is the country's economic and administrative centre and includes the Central Bank of the Gambia. Peanut processing is the country's principal industry, but beeswax, palm wood, palm oil, and skins and hides are also shipped from the port of Banjul.[5]

Banjul is also the home of the Gambia Technical Training Institute. GTTI is currently engaged in a partnership with non-profit organization Power Up Gambia to develop a solar energy training program.

Banjul has a very warm climate year round. Under the Köppen climate classification, Banjul features a tropical wet and dry climate. The city features a lengthy dry season, spanning from November to June and a relatively short wet season covering the remaining four months. However, during those four months, Banjul tends to see heavy precipitation. August is usually the rainiest month, with on average 500 mm of precipitation falling. Temperatures are somewhat constant, though it tends to be slightly cooler during the wet season than the dry season.

According to a Gambian government minister, Banjul is at risk of submerging under water by a metre rise in sea levels as a result of climate change and global warming.[6] 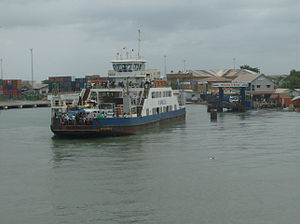 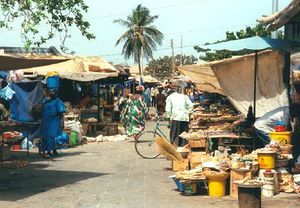 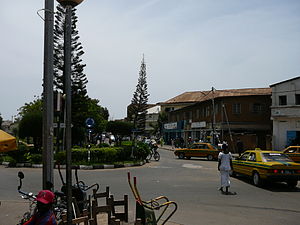 A street in Banjul

As of May 2014, ferries sail regularly from Banjul across the River Gambia to Barra.[8] The city is served by the Banjul International Airport. Banjul is on the Trans–West African Coastal Highway connecting it to Dakar and Bissau, and will eventually provide a paved highway link to 11 other nations of the Economic Community of West African States (ECOWAS).