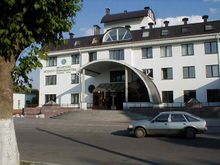 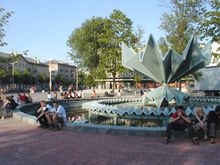 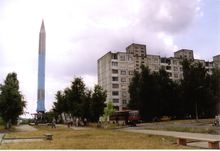 Ballistic missile on display in Baranovichi

i/bəˈrɑːnəvɪtʃiː/; Belarusian: Бара́навічы [baˈranavʲitʂɨ], Łacinka: Baranavičy, Baranavichy, Baranavichy; Russian: Бара́новичи, Polish: Baranowicze, Yiddish: באראנאוויטש‎, Baranovich) is a city in the Brest Region of western Belarus with a population (as of 1995) of 173,000. It is a significant railway junction and home to a state university. It was also the center of the Baranavichy Voblast between 1939-1941 and again between 1944-1954.

Baranovichi (Listeni/bəˈrɑːnəvɪtʃiː/; Belarusian: Бара́навічы [baˈranavʲitʂɨ], Łacinka: Baranavičy, Baranavichy, Baranavichy; Russian: Бара́новичи, Polish: Baranowicze, Yiddish: באראנאוויטש, Baranovich), is a city in the Brest Region of western Belarus with a population (as of 2013) of 178 678. It is a significant railway junction and home to a state university. It was also the center of the Baranavichy Voblast between 1939-1941 and again between 1944-1954.

In the second half of the XVII century the Jesuit mission housed in Baranavichy. In the second half of the XVIII century Baranovichi was the property of Mosalskih and Neveselovskih, in the XIX century belonged to the Countess E.A. Rozwadowski. It was part of Novogrodek (Now Navahrudak) okrug, which was successively part of Slonim Governorate, Lithuania one, Grodno one and Minsk one.

The city's history began on 17 (29) in November 1871, when began a movement at the newly built section of the railway Smolensk - Brest. Name of the station that arose during construction, gave the nearby village - Baranovichi, the first mention of which is found in the testament of A.E .Sinyavskaya in 1627. Then, in 1871, not far from the station has been built the locomotive depot. 1874 - the appearance of the railway junction. The wooden building of the station, station buildings, a few houses in which lived the railway - such were Baranovichi. The new railway will link Moscow with the western outskirts of the country. The impetus for more intensive settlement of the areas adjacent to the station from the south, was the event in May 1884 - Minsk provincial board has made a decision about building a town on the landlords' lands Rozwadowski, known Rozvadovo. Building of the town was carried out according to plan, approved by the Governor of Minsk May 27, 1884. In the village were 120 houses and lived a half thousand people. According to the plans, approved by Emperor Alexander III, was assumed that there will still be also one railway - Vilnius - Luninets - Pinsk - Rovno. Therefore, at the same time, two and a half kilometers from the station, the Moscow-Brest railway line crossed the track Vilnius-Rovno from Polesie railways. At the crossroads of the railway there is another station Baranovichi (according to Polesie railways), which became the second center of the city. As in the first case, in the area of station settle workers and traders. There is a new settlement, which unlike Rozvadovo, which became informally named the Old Baranovichi, was named New Baranovichi. It was developed on the land owned by peasants of villages located near the new station (Svetilovichi, Gierow, Uznogi). More convenient than the landlords' land, lease terms, proximity to administrative agencies contributed to the rapid growth of this settlement.

During the Polish-Soviet war, it was occupied by Poland on 18 March 1919. Soviets retook it on 17 July 1920 but the Polish retook it again on 30 September 1920. On 1 August 1919 it received city rights and became a poviat centre in Nowogródek Voivodship. In 1921 Baranowicze had over 11,000 inhabitants (67% Jews, with the rest being mostly Belarusians, Poles and Russians). Soon the city started to grow and became an important centre of trade and commerce for the area. The city's Orthodox cathedral was built in the Neoclassical style in 1924-31; it was decorated with mosaics that had survived the demolition of the Alexander Nevsky Cathedral, Warsaw. The city was also an important military garrison, with one KOP Cavalry Brigade, 20th Infantry Division and the Nowogródzka Cavalry Brigade stationed there. Because of the fast growth of local industry, in 1938 a local branch of the Polish Radio was opened. In 1939 Baranovichi had almost 30,000 inhabitants and was the biggest and the most important city in the Nowogródek Voivodship.

Soon after the beginning of World War II the control of the city was gained by the Soviet Union. The local Jewish population of 9,000 was joined by approximately 3,000 Jewish refugees from the Polish areas occupied by Germany. After the start of Operation Barbarossa the city was seized by the Wehrmacht on June 25, 1941. In August of the same year a ghetto was created in the city, with more than 12,000 Jews kept in terrible conditions in six buildings at the outskirts. Between March 4 and December 14, 1942, the entire Jewish population of the ghetto was sent to various German concentration camps and killed in gas chambers. Only about 250 survived the war.[1]

The city was seized by the Red Army in July 6, 1944 (Russian and Ukrainan articles of Baranovichi sets liberation date in 8 July 1944). Significant part of the Polish population of the city had been expelled to Siberia and Kazakhstan. Most of remaining Poles were expelled to Poland. After World War II the city became part of the Soviet Union and the Byelorussian SSR and started to be referred to under its Russian name of Baranovichi. In this time an intensive industrialization took place. In 1991 it became part of independent Belarus.

The city is located on the main east-west highway in Belarus, the M1, which forms a part of European route E30. The first rail line through the city opened around 1870. With additional lines built subsequently, the city developed into an important rail junction. A large military airfield used by the Belarusian Air Force is located just south of the city.